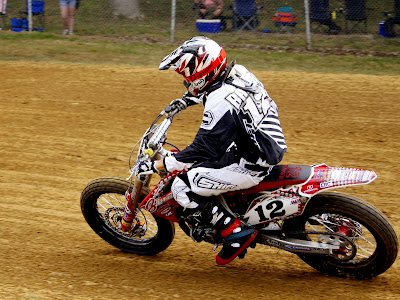 '09 AMA Pro Flat Track Pro Singles Champion Brad Baker hammers the throttle on his #12 Brother Powersports/MVR/Schenk Racing/Magor League Moto-sponsored Honda CRF450R during practice for round 14 of the 2011 AMA Pro Flat Track Harley-Davidson Insurance Grand National Championship presented by Motorcycle-Superstore.com at the Peoria TT on August 21.  The Bullet overcame a practice off-track excursion and a nasty pile-up on lap one of his heat race to fight his way back into the National main event with a solid 12th place finish after starting from the back row.

Baker, who hails from Washington State, grabbed the '11 Saddlemen AMA Pro Flat Track Rookie of the Year honors at the season-ending round at Pomona with a 6th place finish in the overall point standings, including top finishes on the year of 3rd place at the Daytona Short Track II round and 2nd place at the Pomona Half-Mile season-ender.  In his first ride with the Lloyd Brothers Motorsports Ducati team at the Springfield Mile I round over Memorial Day weekend, Baker also set fast time, won his heat and finished 5th with an ill-handling wobble on the straightaways.

The man with the million dollar smile will be changing it up for the 2012 season, as he will be riding Kawasakis in both the Twins and Singles Series events under the tutelage of Grand National Championship-winning tuner Kenny Tolbert, along with some help from 13-Time AMA Grand National Championship tuner, Bill Werner.  The team has been testing in Texas since the Indy Dealer Expo over the February 17-19 weekend, as well as working out the fine-tuning of their machines in Wisconsin with seasoned veteran tuner Werner.


"Racing is part of our heritage," says Tom Seymour, President of Saddlemen. "We have supported many generations of up and coming racers through our Flat Track Program and now look to do the same with Road Racing. It is a great way to grow the sport and for Saddlemen to showcase our sport bike seat technology. I am very proud to see Daytona Sportbike teams racing on the very same seat an enthusiast can buy at their local dealer. Frankly, I can't wait to get things started at this year's Daytona 200!"
As part of the agreement, Saddlemen will also have exclusive in-market and promotional rights to AMA Pro Road Racing and AMA Pro Flat Track series marks in addition to on-site activation space within the paddock at each AMA Pro Road Racing and AMA Pro Flat Track event.
The 2012 AMA Pro Road Racing and AMA Pro Flat Track seasons will kick off with the historic Daytona 200 Week, scheduled for March 15 - 17, 2012 at Daytona International Speedway.
For tickets, please visit http://www.daytonainternationalspeedway.com.

About Saddlemen:
Saddlemen is celebrating 25 years of building cutting edge motorcycle products. During that time they have been major supporters of the motorcycle industry. Over the years Saddlemen products have helped many of racing's elite riders - names like Hayden, Bostrom, Carr, Kopp, Coolbeth, Wiles, Johnson and Mees. Saddlemen offers the industry's most diverse line of seats, saddles and luggage. Visit Saddlemen on the web at www.saddlemen.com or www.facebook.com/Saddlemen.