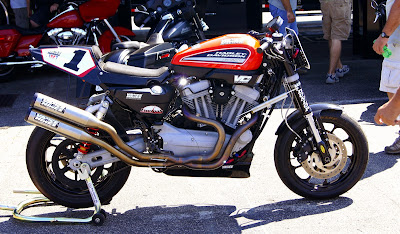 A race ready Vance & Hines Harley-Davidson XR1200 sits on display outside the V&H tent in the infield of the Indianapolis Motor Speedway during the 4th Annual Red Bull Indianapolis MotoGP weekend on August 27, 2011, while the AMA Pro Vance & Hines XR1200 Series made it's debut at the century-old facility.  The 30-rider strong field for the event included former Daytona 200 winners Jason DiSalvo and Steve Rapp, local Indy racer Gene Burcham, and former European XR1200 Series Champion Jeremy McWilliams, in what was arguably the best racing seen at Indy of the 2-wheeled variety in decades.

With AMA Pro Road Racing confirming earlier this month that the AMA Pro Vance & Hines XR1200 Series would be returning to Indy for the 5th Annual Red Bull Indianapolis MotoGP in August 2012, the Milwaukee iron machines will surely once again wow the crowd on the 2.6 mile circuit.  Rookie Tyler O'Hara and eventual '11 XR1200 Series Champion Chris Fillmore split the doubleheader round at Indy last August.