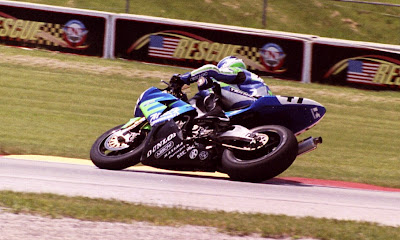 Future 2-Time AMA Superbike Champion Josh Hayes rolls through turn 14 at Road America during a practice session for the Chevrolet AMA Superbike Championship presented by Parts Unlimited class during the Suzuki Superbike Doubleheader weekend in June 2004.  Riding the #41 Attack Performance/Kawasaki Motors/Dunlop/Teknic-sponsored ZX-10R, Hayes had an off weekend for the strong year the team was having, placing 39th and 33rd in the two premier events at Elkhart Lake that year.  He rebounded to have a great season with an 8th place finish in the year end standings.