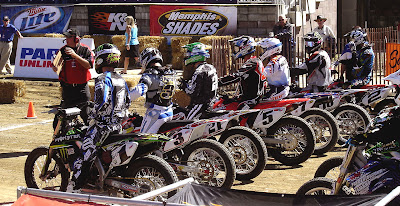 As practice gets ready to start at round 13 of the 2010 AMA Pro Flat Track Grand National Championship series at the Springfield Short Track, seven of the top-10 riders in the championship points get ready to go out and turn some laps in preparation for the day's activities at the Illinois State Fairgrounds Rodeo-Multipurpose Arena on September 4, 2010.

By the end of the evening, Henry Wiles will have won his 4th consecutive race at Springfield on his #1 Monster Energy Kawasaki/Jones Bros-sponsored KX450F and would also leave with his 2nd consecutive Singles Series Championship.

Joe Kopp, on his #3 Latus H-D/MotoConcept-backed Honda CRF450R would finish 4th, and would battle with Jake Johnson down to the last event of the year for the AMA Grand National Championship.  The 2000 AMA Grand National Champion would come up short on his goal, and would go on to finish 2nd in the overall championship and announce his retirement from full-time racing at the end of the season.

Jared Mees on the #21 Rockysonline.com/Rogers Lake Racing-sponsored Honda would finish the night in the 9th spot and at the end of the year would land himself in the 3rd place in the overall championship behind Johnson and Kopp.  The '09 AMA Grand National Twins Champion would do that based on a great season of solid results, albeit without a win.

Johnson on the #5 Zanotti Racing/Leo Vince-backed Honda would end the night under the lights in Springfield in the 2nd spot, and by year's end would garner his first of two consecutive AMA Grand National Championships, to add to his '06 and '08 Singles Series Championships.

Sammy Halbert would end up taking a provisional on his #7 Woody Kyle Racing/Fredericktown Yamaha-sponsored YZ450F to come home in the 11th spot for the night.  By year's end, Halbert would rank as the 4th overall man in the championship standings.

Johnny Lewis on the #10 Scott Powersports/Pit Posse-sponsored Honda would fight for a 7th place spot in his heat, and come up just .303 seconds out of the third and final transfer in his semi and miss the National main for the evening.  By year's end, however, Lewis would rank as the 10th man in the championship in what was his first full year of full-time competition in the series.

And Kenny Coolbeth, Jr. would take the #2 Bettencourts Honda/Jason Perry-backed CRF450R to a 7th place finish and by season's end would sit in 5th place in the overall championship standings.  Coolbeth is a former 3-Time AMA Grand National Twins Champion ('06-'08) and the '07 Singles Champ.


With the 2012 AMA Pro Flat Track Harley-Davidson Insurance Grand National Championship presented by Motorcycle-Superstore.com season getting ready to kick off in Daytona Beach on Thursday, March 15 and Friday, March 16, six of these men will be ready to go at it again for the series's championship (Kopp is not on the pre-entry list).  With currently 46 riders entered for rounds 1 and 2 at the Daytona Short Track, it is sure to be an exciting season opener.

Most of (if not all of) these guys will already have been in action as Steve Nace Racing's AMA Flat Track All Star Series is set to kick off at Oglethorpe Speedway in Savannah, GA. on Friday, March 9, with the 2nd round set for Sunday, March 11 at Volusia Speedway Park in De Leon Springs, FL.

Ken Kerr is one of the fine photographers that covers the AMA Pro Flat Track Harley-Davidson Insurance Grand National Championship presented by Motorcycle-Superstore.com series.  As well as a fine offering of photos taken at many events throughout each year, Ken also offers rider autograph sheets for the riders that follow the series's schedule, that are handed out in the pits to the fans that take the time to make the pit walk at an AMA Pro Flat Track event.  Ken also offers for sale some very nice canvas-and-frame-mounted shots of his work.

You can check out Ken's latest video from his KerrGraphix work that is a compilation of some of his photos throughout the 2011 season, that KK just put together.  See it here:

Ken's site, KerrGraphix has a big listing of tracks and events he has photographed that you can view here: