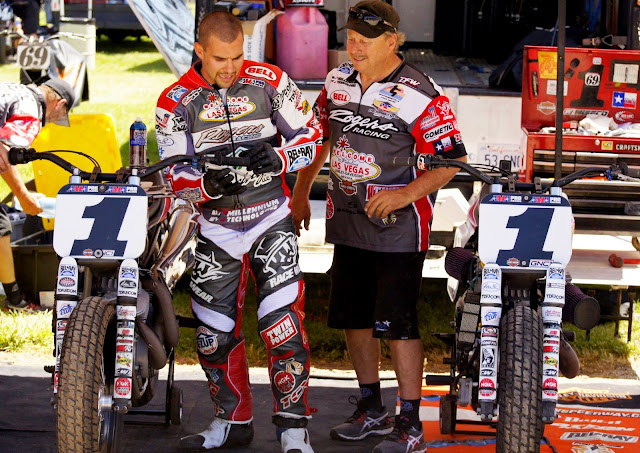 The second annual trip to the ESPN XGames Harley-Davidson Flat Track event in Austin, TX. last week saw the cream of the crop from The Rolling Thunder Show displaying their talents to the masses at the Circuit of the Americas-hosted event alongside other extreme sports (the Step Up competition was held right next to the flat track layout) and did another stellar job of showing off the skills of the greatest racing series on two wheels in the world.

After bitter disappointment in the inaugural event in 2015 when Jared Mees suffered a mechanical failure with less then half a lap to go, the defending and 3-Time AMA Grand National Champ took home the gold medal this year, winning the 20-lap final over Kenny Coolbeth, Jr. and Brad Baker. Coolbeth did an admirable job of pressuring Mees in the closing laps only to come up short at the checkered flag.

Defending XGames H-D Flat Track winner Bryan Smith suffered a crash on the first go around in the final that saw his fallen motorcycle also take out Sammy Halbert.

The coverage of the event was shown live on ESPN on Thursday, June 2 from 8:30-11:00 PM EDT and was viewed by over 309K people and was the 23rd most-watched sports program for the 24 hour period, behind several showings of Sportscenter and WWE offerings. Although those numbers were off from last year's events, game one of the NBA finals was being shown in prime time on ABC and drew over 19M people, most likely pulling away from what could have been a larger viewing total audience.

Nonetheless, ESPN's coverage did an excellent job of showcasing the talents of all of those involved, and the racing was excellent and the track was in much better shape then last year's was, even considering it was underwater just several days before the riders and teams arrived on Wednesday, June 1 for the first practice sessions of the event. Helmets off to former AMA Pro Flat Track manager Dan Johnsen and his crew for getting the track in as good of shape as it was. On Wednesday, they were using a helicopter to help dry out the surface, and both days were under constant threat of more rain which hung in the area like a bad penny.

In the shot above, Mees and his Rogers Racing head wrench Kenny Tolbert work to ready the #1 Las Vegas H-D/Rogers Racing/Harley-Davidson Motor Company-sponsored XR750s during round 6 of the 2016 AMA Pro Flat Track Grand National Championship Harley-Davidson GNC1 presented by Vance & Hines series at the Springfield Mile I on May 29.

Word has it that the contract with the Circuit of the Americas is up after this year's competition, and at this time next year's event location for the XGames is still up in the air. But surely after two stellar years of competition in the long time event will see the stars of AMA Pro Flat Track return again next year, wherever that may be.

And a big tip of the helmet and congrats to Jared Mees for his gold medal-winning performance from Thursday night. Bravo! And as well to everyone involved for putting on a great show for all of the fans.

You can check out more below thanks to AMA Pro Flat Track.

Round 6 of the 2016 AMA Pro Flat Track Grand National Championship Harley-Davidson GNC1 presented by Vance & Hines series again proved the dominance of Howerton Motorsports Kawasaki's Bryan Smith on the mile ovals as Flyin' Bryan took his third win in-a-row on the season (all on mile ovals) and his third-straight win at the Illinois State Fairgrounds.

Unfortunately, Sunday's race got off to a bad start when Brad Baker on the factory H-D XR750 got into CR Motorsports' Stevie Bonsey at the start of the second go-around heading into turn one. Even worse, Bonsey's bike split the airfence and the haybales, causing Bonsey to go into the fence hard. After being hauled out by the ambulance, Bonsey was and is reported as having suffered a neck fracture that will now cause him to have to wear a halo for the next couple of months, but per postings on Facebook he appears very upbeat and ready to get the healing process completed and return to action. You can keep up with his updates here on FB.

After the restart, it was a big duel all the way around for the 25-lap National main, which saw no fewer then six combatants going at it all over, especially heading to the stripe. Smith ended up leading 16 laps, with Kenny Coolbeth, Jr. credited with a lap, Jared Mees with five laps and Baker with three. And those were just at the stripe. Also in the mix for the entire battle were Brandon Robinson on the Kennedy Kawasaki, with Glidden/Dreyer Motorsports' Doug Lawrence doing a great job of hanging just shy of the top-5 at the end.

In the shot above, riders hit the gas on the restart of round 6 of the 2016 AMA Pro Flat Track Grand National Championship Harley-Davidson GNC1 presented by Vance & Hines series at the Springfield Mile I on Memorial Day Weekend Sunday, May 29.

The top five finishers were separated by only .220 seconds after the 25-lap main, with 6th-place finisher Lawrence on the Indy-based Glidden/Dreyer Kawasaki just .503 seconds behind Coolbeth. Also of note, a big tip of the helmet to Jeremy Higgins on the #82 Higgins Racing Kawasaki for what may have been his career-best mile finish of 7th-place.

A big thumbs up to Ryan Wells for winning his first-ever Twins Series event in the GNC2 class, while local Indy resident and first year Pro rider Kevin Stollings taking home his first-ever podium in a Twins event and leading several laps during the GNC2 main to nearly nip Wells at the stripe only to come up short by .033 seconds. Keep an eye on this Stollings youngster as he has a very bright future ahead of him.

For more on last Sunday's races, check out all of AMA Pro Flat Track's videos and reports below, as the racing at Springfield as usual didn't disappoint.

You can also get the full results here, and Cycle News' Dave Hoenig's report here as well.

FansChoice.tv coverage from Round Six at the Springfield Mile I is now available for VOD viewing 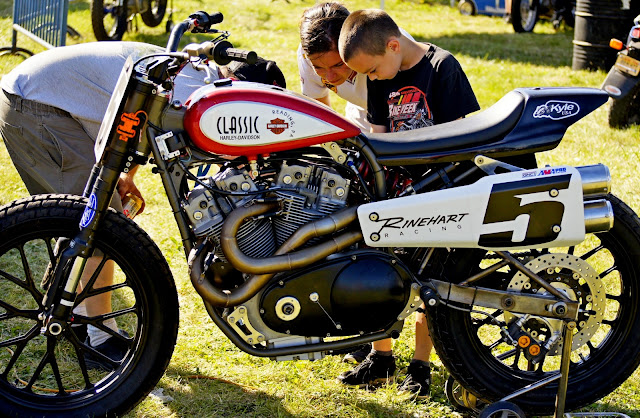 Zanotti Racing announced a new partnership/sponsor for their AMA Pro Flat Track Grand National Championship team with National #5 Jake Johnson last week just before the Springfield Mile I on May 29.

In the shot above, Johnson's #5 Zanotti Racing/Classic H-D/Harley-Davidson Motor Co-sponsored XR750 back up machine sits in the pits while a family of fans check it out up close during round 6 of the 2016 AMA Pro Flat Track Grand National Championship Harley-Davidson GNC1 presented by Vance & Hines series at the Springfield Mile I on May 29.

Check out the full details below thanks to Zanotti Racing on their new agreement for the AMA Pro Flat Track season ahead for Jake Johnson with Rinehart Racing.

Zanotti Racing is honored to announce Rinehart Racing as the exclusive supplier of exhaust systems for Jake Johnson’s Harley-Davidsons.

Rinehart Racing has been a high quality supplier of aftermarket high performance exhaust for years. Steve Polk, head mechanic and horsepower guru at Zanotti racing says, “It is exciting to be working so closely with a quality company like Rinehart. I am sure we will coax more power out of Jake’s bike to keep him at the front all year.”


Rinehart Racing has been producing quality exhaust that make real horsepower for Harley-Davidson’s for decades.
David Zanotti, owner of Zanotti Racing, is proud to welcome them into the Zanotti Racing family as a highly valued sponsor.


Johnson, under the banner of Zanotti Racing, is a two-time Grand National Champion, winning


in 2010 and 2011, and currently sits in the #3 points position in the current 2016 season.
“We are excited to have Rinehart Racing as part of our team for the rest of this season” says


help us to get that winning combination.”


“Its pretty cool to have Rinehart Racing as our newest partner,” says Johnson of the


sponsorship. “To have a company that is as committed to performance and truly understands


what it takes to win is a huge benefit to our team.”
“We are thrilled to have this opportunity to partner with Zanotti Racing” said Judd Hollifield,


designing and developing a competitive, race specific exhaust system and joining forces with the Zanotti Team on the road to a winning season.”

manufacturers race application exhaust, as well as consumer products for Harley-Davidson® and Indian motorcycles®. Our corporate office, warehouse and manufacturing facility are all

located in Asheville, NC.
To learn more about Rinehart Racing please visit our website at: