New Website From a Great Old Pro!! Check it out.... 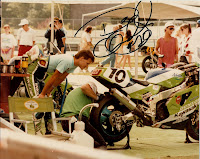 While you are checking out the various racing going on around the
world this w/e, please take the time to visit the following link:

...and the official shameless plug for Stu's Shots R Us:


Larry Lawrence, who at one time took care of media relations with and for the AMA racing series, and whose fine work you can now also find in Cycle News, amongst other publications, has started his own website featuring some shots and stories he has done over the years.
Currently covering the AMA Flat Track Series on a regular basis as well as penning his column 'Archives' for Cycle News, Larry has been around the
motorcycle racing world almost as long as dirt, and myself have been. His weekly column is reason enough to buy and read CN, but his coverage of the
flat track series the last several years has been stellar, to say the least.
After all of the time he has wrapped up in doing this, 'LL' started his website earlier this month featuring a BOAT load of great archival shots and writings
that go back in to the 70s. Being an ole hoss like myself, he has been around some of the finest and fastest and his work more then speaks for itself. And I
can't remember when I ever heard anyone speak a harsh word about the man, so his jovial attitude and endearing smile and laugh almost immediately make you gravitate towards anything bike-related, or otherwise, he is involved with. The man is an expert and has fun, obviously, doing it!
Please take the time to check him out--I guarantee you won't be dissapointed!

The shot above is actually one of 3-Time AMA Superbike Champion Doug Chandler, that I took at Road America in June of '90, the w/e he won and continued on a tear for the rest of the year to capture his first AMA title. As
you look at the shot of Doug looking over his tuner's shoulder at the bike, in the
background you can see the constant-smiling face of Mr. Larry Lawrence walking past. He is the gentleman in the center-rear of the shot in blue jeans and light blue shirt. Okay, if you didn't know him well you might not recognize him, but nonetheless his 'Cheshire Cat' grin is one that never seems to disappear as you can tell.

...and winning it for Ducati was none other then Mr. Larry Pegram, who had last
won a U.S. Superbike round back in '99 at Willow Springs Raceway in the sunny
state of California.
Larry, who also won his last--and his first--Superbike race on a Ducati, did so
while riding a Fast By Ferraci-prepped Duc at the time. According to reports today
from the beautiful Road America circuit, Larry mananged to best not only a VERY solid
field of competitors in Aaron Yates, Ben Bostrom and Neil Hodgson--just to name a few--
but also BESTED the King of U.S./AMA Superbikes, yes, ladies and gentleman, Mr. Mat
Mladin, the 6-Time Superbike Champ. And per those reports, did so in a heads up race that
went to the wire with Larry pulling out the win over Mad Mat by just over .3 seconds!
Now, to win a Superbike race in itself is quite the accomplishment, but to do so in a heads
up assault against one Mat Mladin, well, is pretty darn rare! (For more proof of that you will have to read my previous posts and brush up on your history via some of the other websites
that have more time and can do a much better job of documenting that then I can. But to say
this was a major accomplishment by itself is understating the feat dramatically!)
Congrats to Larry Pegram on his Foremost Insurance/Leo Vince Exhausts Duc for putting it
on the top of the box again, and for giving Ducati that elusive win they haven't seen on U.S.
soil in quite some time! And bravo to you, as well, Mr. Pegram for being able to best the best
that U.S. soil has seen and probably will never see again in one Mr. Mladin! I'm sure your respect level in the paddock, let alone with fans such as myself, has gone up exponentially.
While we celebrate Mr. Pegram's feat--who by the way has raced a variety of road race AND
dirt track races since the early '90s--you can check out the following links from the wonderful
folks at http://www.roadracingworld.com/ and http://www.superbikeplanet.com/ who have supplied us with the results links, and also to the great people at http://www.speedtv.com/ for the nice read on
the race itself:
http://roadracingworld.com/news/article/?article=36851
http://superbikeplanet.com/2009/Jun/e/n090607g.htm
http://moto-racing.speedtv.com/article/ama-sbk-pegram/
The shots you view as you are relishing the great win by Larry and Ducati are of Mr.
Pegram at the sprawling Road America track last year during the June AMA round. These
were taken back in the turn 10 area of RA while practice was being run for the then-FX class.
Larry had run that class during the '07 and '08 campaigns on his own team with Foremost and
Leo Vince as his main sponsors while riding a Ducati 848 against the onslaught of the mainly
600, 4 cylinder, inline-based Japanese bikes. This practice session, as you look closely, was
being run as the track was drying after a fairly heavy rain mid-morning on Saturday of the
event. Hence the grooved tires, as they ran race slicks during the dry events and race rain tires
during the wet events. This was NOT a DOT tire class. This was a MINI-Superbike class, ala the name 'FX'--for Formula Extreme, as it were, as the class was named at one time. Larry ran
against the best of the best and was always in the hunt and if my fading memory recalls ended
up ranked 4th overall in class at the end of the '08 campaign. Please correct me if I am wrong.
Again, a major tip o' the hat to Larry and Ducati. And of course, to Mad Mat, as he does retain
the points lead after winning SuperPole and race 1 of the w/e yesterday. Even though he isn't
worried about points. But that is another post for another time.....
God Bless all and have a great week!
Posted by Stuman714 in Indy at 6:48 PM No comments: