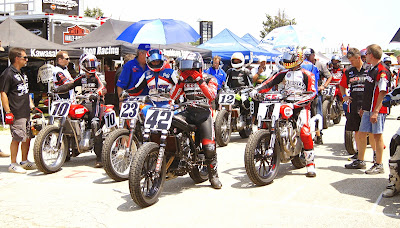 The first mile event of the season in the 2013 AMA Pro Flat Track presented by J&P Cycles Grand National Championship from the Sacramento Mile is in the bag as the stars of The Rolling Thunder Show get ready to saddle up on their Singles Series machines this weekend at the Castle Rock TT.

AMA Pro Flat Track has put together a nice review of round 5 at the Sacto Mile, including some nice videos and interviews with the winners and podium finishers, and the links to the live PPV extravaganza that was seen by thousands last Saturday night.

In the shot above from the running of the Springfield Mile I on May 27, 2012, riders get ready to head out for heat action for the annual Memorial Day Weekend running at the Illinois State Fairgrounds mile oval.

(L-R) Johnny Lewis on the #10 Scott Powersports Kawasaki, Jeffrey Carver, Jr. on the #23 Kiesow Racing H-D XR750, Bryan Smith on the #42 Howerton Motorsports Kawi, Brad Baker on the #12 Kenny Tolbert Racing Kawi, and Jake Johnson on the #1 Zanotti Racing XR are set for battle at the arena of speed in Springfield.

So sit back, check out the videos and interviews and get ready for what will surely be another great event this Saturday, August 3 at the Castle Rock TT, round 6 of the 2013 AMA Pro Flat Track presented by J&P Cycles Grand National Championship season. 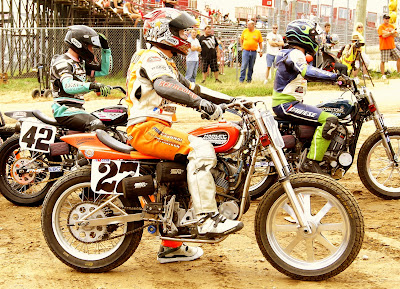 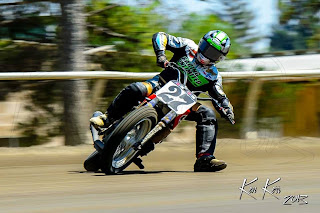 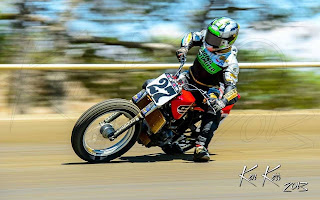 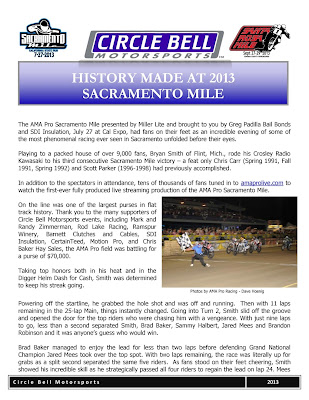 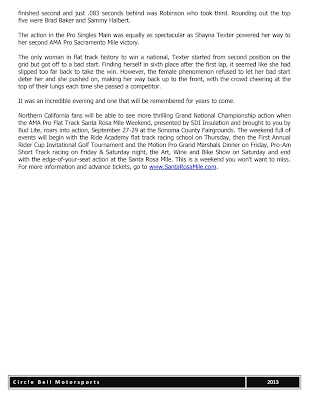 
TOOELE, Utah (July 30, 2013) - The Miller Motorsports Park round is always a favorite for the GEICO Motorcycle AMA Pro Road Racing field, in large part because the open, flowing layout is a real rider's track. For the AMA Pro GoPro Daytona SportBike field, the doubleheader races will be a chance to compete on a different kind of circuit from the ones of the past few events. Mazda Raceway Laguna Seca, Mid-Ohio, and Barber are all tighter, more technical, and have a quicker lap than the 15-turn, 3.06-mile course situated just west of Salt Lake City. 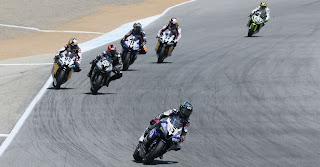 Fully produced, high definition broadcasts of this weekend's races from Miller Motorsports Park will be available to audiences outside of the United States and Canada through AMA Pro Live, AMA Pro Racing's live streaming video website. At the low introductory cost of $0.99 USD per race, international fans can follow along with their favorite GEICO Motorcycle AMA Pro Road Racing stars this weekend by logging on at http://www.amaprolive.com/rr/.
The international pay-per-view channel will be available for the following races:
Live Streaming Video and Social Media

In addition to the live broadcasts on CBS Sports Network and AMA Pro Live, AMA Pro Racing will be live streaming multiple channels of behind-the-scenes video of the weekend's activities alongside Live Timing & Scoring on the AMA Pro Live streaming video website. AMA Pro Live puts fans in the director's chair, allowing them to choose from a variety of viewpoints including track cameras, paddock cameras and a press conference channel. Streaming will begin with coverage of the weekend's practice and qualifying sessions on Friday, August 2 at 1:00 p.m. ET/10:00 a.m. PT at http://www.amaprolive.com.