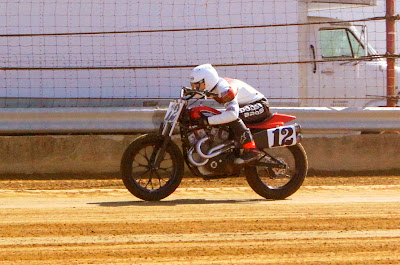 After a two month break due to the postponement of the Springfield Mile I round over the Memorial Day weekend, and the cancelation of the 'original' round 4 of the series the weekend prior at the Lima Half-Mile, The Rolling Thunder Show hit the clay oval at Hagerstown Speedway as 38 riders took a timed-lap in order to try their luck in qualifying for the 18-rider main event in Maryland.

In the end, though, it was all 'The Bullet's' show as he romped to his heat race win, the Dash for Cash win and led the whole show in taking his first win in his third season as an Expert-ranked rider and led 2nd-place rider Jake Shoemaker home by just over 6.7 seconds.

In the shot above, Baker takes the #12 Dodge Brothers/Atherton Family/Wiseco/D&D Exhaust-sponsored XR750 to a qualifying run at the Indy Mile in August 2012.

A big congrats goes out to BB12 for bagging that first big win in his young and what will surely be a very long and rewarding career.  Way to go man!

You can check out complete results, this week's write-up in Cycle News and some photos from the night's action below, as well as catch the official press release from AMA Pro Flat Track.


Complete results for round 4 of the 2013 AMA Pro Flat Track presented by J&P Cycles Grand National Championship season at the Hagerstown Half-Mile can be found here.

A big thanks to Dave Hoenig, the official photographer for AMA Pro Flat Track and one of the contributors for Cycle News for penning this great article about the happenings at H-town last Saturday night.

And when Dave isn't shooting the stars of the greatest racing show on two wheels in the world for AMA Pro Flat Track, he's also shooting some excellent shots for his website, Flat Trak Fotos.com, where you can find his albums here from Hagerstown (note--as of this writing Dave hadn't posted his albums from round 4 as of yet, but are usually up within a few days after each event.)

And last but certainly not least, here's a sampling of Dave's photos on the AMA Pro Flat Track site from Hagerstown.


HAGERSTOWN, MD. (July 6, 2013) - Brad Baker (Dodge Bros Racing/Harley-Davidson) was in a different area code all night during Round 4 of AMA Pro Flat Track presented by J&P Cycles' main event. The Washington product claimed his first career Grand National Expert main event victory under the lights at Hagerstown Speedway in Hagerstown, Md. Baker redefined the term domination tonight as just when you thought his lead couldn't get any bigger, he seemingly increased it almost every lap. Baker's margin of victory was a clean 6.77 seconds over second place finisher Jake Shoemaker (Kawasaki) by the end of the race and his lead was never in jeopardy. 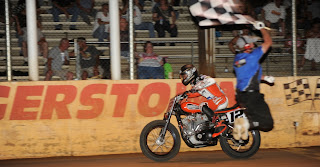 Brad Baker gets the checkered flag after taking the #12 Dodge Brothers Harley-Davidson XR750 to his first win in the AMA Grand National Championship Expert ranks at the Hagerstown Half-Mile last Saturday night.  Round 4 of the 2013 AMA Pro Flat Track presented by J&P Cycles Grand National Championship season saw the 2011 AMA Pro Flat Track Saddlemen Rookie of the Year sweep the evening's events in winning his heat, the Dash for Cash and the Grand National main event, leading all 25 laps on the clay surface Maryland facility.  AMA Pro Flat Track photo by Dave Hoenig.
"It feels amazing, I haven't been in the game very long as far as the expert level goes," said Baker. "But it feels like it took forever to get that first win. My motorcycle was absolutely top of the line tonight and I can't thank my team and sponsors enough. It was definitely the most comfortable I've felt on a motorcycle in a long time. I've been so eager to get this first win out of the way for a long time now and it just feels amazing to finally get it."
Baker's main event victory wasn't his only win of the night, as the 20-year-old won the dash for cash for an extra $1,000 payout. You just couldn't help but feel great for the young star as he's been so close to victory all season long but hasn't been able to get over the hump. Tonight he silenced all of the critics that hounded him about getting that first win with an absolute perfect performance on his Harley-Davidson.
Although he was nowhere near in competition with Baker, Jake Shoemaker certainly had an impressive effort tonight as he finished second in his first ever race at the Grand National Expert Twins level. Coming in third behind Shoemaker was Bryan Smith (Crosley Radio/Kawasaki EX650). Smith came all the way back from the eighth slot in the second row to earn his second podium of the year with Doug Lawrence (R&J Racing/Harley-Davidson) and Sammy Halbert (Whites Harley/Harley-Davidson) rounding out the top five.
AMA Pro Grand National Championship Combined Point Standings
1)     Brad Baker (77)
2)     Brandon Robinson (57)
3)     Henry Wiles (57)
4)     Jake Johnson (57)
5)     Kenny Coolbeth Jr. (47)
6)     Sammy Halbert (44)
7)     Bryan Smith (42)
8)     Robert Pearson (40)
9)     Mikey Rush (37)
10)  Jared Mees (33)
AMA Pro J&P Cycles Pro Singles
Jason Isennock's (High's Dairy Stores/Honda CRF450R) strong Heat 2 win earned him pole position in the AMA Pro J&P Cycles Pro Singles main event and the Maryland native took full advantage, sealing the victory after an intense battle between him and Wyatt Maguire (Kirkland Racing/Yamaha YZ 450) all the way until the drop of the checkered flag.
"Wyatt (Maguire) gave me a great run the whole way and it was just an awesome race," said Maguire. "I'm very happy to be on top, it's certainly been a long time coming. My team built me a rocket ship and I couldn't thank them enough. I want to say thank you to all of my sponsors and the fans for coming out and getting loud. This is just awesome."
Isennock's win was his first ever at the professional level and it happened to come in his hometown state of Maryland. The 26-year-old was neck and neck with Maguire - at one point the two were flip flopping leads on every turn and for the majority of the race were within less than a second of each other.
Dan Bromley (Bromley Brothers KTM Racing/KTM 450 SX-F) closed out the podium with Ryan Wells (Waters Auto Body/Honda CRF450R) and Stephen Vanderkuur (Parkinson Brothers Racing/Honda CRF450R) rounding out the top five.
AMA Pro J&P Cycles Pro Singles Point Standings
1)      Wyatt Maguire (67)
2)      Kyle Johnson (59)
3)      Ryan Wells (57)
4)      Jason Isennock (51)
5)      Mike Poe (42)
6)      Rodney Spencer Jr. (40)
7)      Stephen Vanderkuur (38)
8)      Jake Constantine (34)
9)      Dominic Collindres (34)
10)   Shayna Texter (32)