DAYTONA BEACH, Fla. (July 10, 2013) - So far, 2013 has been a breakout season for Cameron Beaubier and this weekend's AMA Pro GoPro Daytona SportBike doubleheader at Mid-Ohio Sports Car Course will be another chance for his stock to rise even further - or perhaps his rivals will manage to beat the Californian at the twisty, 2.4-mile circuit that has been a mainstay on the GEICO Motorcycle AMA Pro Road Racing tour for decades. The Buckeye SuperBike Weekend presented by Dunlop Tire is scheduled to take place at Mid-Ohio this weekend, July 12-14, 2013 as round 4 on the 2013 GEICO Motorcycle AMA Pro Road Racing calendar. 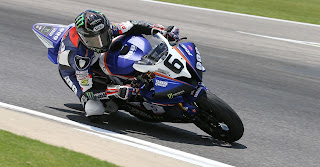 In addition to the live broadcasts on CBS Sports Network, AMA Pro Live will be live streaming multiple channels of behind-the-scenes video of the weekend's activities alongside Live Timing & Scoring. AMA Pro Live puts fans in the director's chair, allowing them to choose from a variety of viewpoints including track cameras, paddock cameras and a press conference channel. Streaming will begin with coverage of the weekend's practice and qualifying sessions on Friday, July 12 at 11:00 a.m. ET/8:00 a.m. PT at http://www.amaprolive.com. High Definition streaming of National Guard SuperBike Final Qualifying will begin on Saturday, July 13 at 9:40 a.m. ET/6:40 a.m. PT.
Social Media Channels