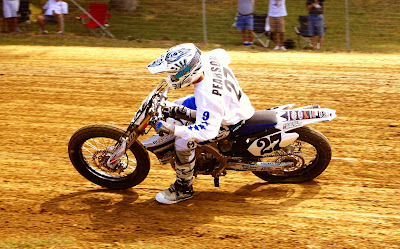 Iowa's own Weirbach Racing, the 2011 AMA Pro Flat Track Pro Singles Champions, along with new-for-2013 signee Rob Pearson, from Morton, IL. had a busy week between the AMA Pro Flat Track presented by J&P Cycles Grand National Championship round at the Hagerstown Half-Mile on July 6 and the rain-delayed Peoria TT round of the Steve Nace Racing AMA All-Star National Flat Track Series presented by GoldenTyre on July 14.

The team headed to what is now round 4 of the 2013 AMA Pro Flat Track Grand National Championship season at the Hagerstown, MD. facility to do battle with the stars of The Rolling Thunder Show, and then worked their way back to the Midwest not too far from Pearson's home to run the rain make-up round of the Peoria TT for the SNR All-Star Series, where the veteran rider won his first-ever event hosted by the Peoria Motorcycle Club in Thunder Valley.

In the shot above, Pearson pours the throttle on during qualifying for round 14 of the 2011 AMA Pro Flat Track Grand National Championship season at the Peoria TT on August 21 on his #27 Matt Reecy Racing Yamaha YZ450F.  Pearson went on to qualify 13th out of the 39 riders who took a timed lap, and finished 2nd in his heat to qualify for the National main, where he brought home a strong 5th-place finish behind winner Henry Wiles, runner-up Jared Mees, 3rd-place finisher Sammy Halbert and 4th-place man Jake Johnson.

You can check out 'Bugs' and the Weirbach Racing team's press release below to see where else the team landed over the week and to hear him talk about his results for the team's east-to-Midwest swing.  Next up for the team is round 5 of the 2013 AMA Pro Flat Track presented by J&P Cycles Grand National Championship season at the Sacramento Mile on Saturday, July 27.

Hagerstown, MD. is a great stop on our schedule every year. On July 6th this
year the red clay was super slick and hard to get much grip.

I ended up with a 4th in the heat and a direct transfer to the main.  The main didn't
go as well as I'd like, as I couldn't seem to keep the wheels in line on the Harley
and I ended up finishing 12th, but held on to the 8th spot in overall points for the season.

This past weekend we had a 3-race weekend all around my home town of Peoria,
IL.

Friday I was leading the heat race at the speedway only to DNF after
electrical problems. We switched to my back-up bike and I started the main from
the back row to work my way up to 4th.

Saturday we spent the day at Macomb for a nice short track with some money
to be made.  Some fast company showed up for the district 17 race. I got the
win in the expert main and ended up 2nd to Brad Baker in the Dash.

Sunday we were in thunder valley for the make up All-Star Race hosted by the
Peoria Motorcycle Club.  It was my first time on a Honda there in a long
time and the Weirbach Machine worked great. 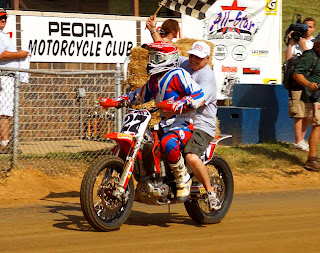 
After getting 2nd in my heat I knew we were fast but needed a start.  I got the hole shot
in the main and ran away with my first win at the local track.  Nice to know we have
a good setup for the Grand National.

We will be heading west in a few days to Sacramento, Ca. and Castle Rock, Washington hope to see you at a race soon. 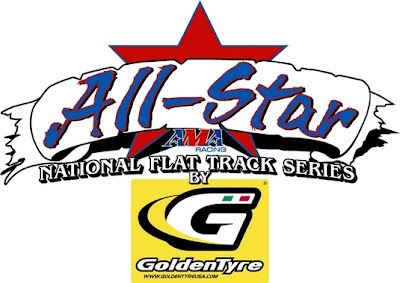