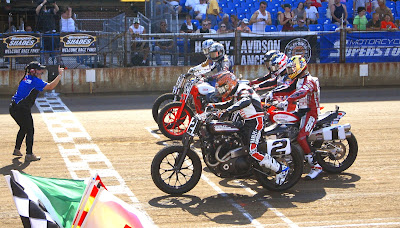 In less then 24 hours, the stars of The Rolling Thunder Show will take to the track in anger as the 2013 AMA Pro Flat Track presented by J&P Cycles Grand National Championship season will unload at the Sacramento Mile for round 5 of the season at the Cal Expo Fairgrounds.

In a season that has seen it's fair (and unfair) share of weather delays and cancellations, the series will hit full stride this weekend in what will be a big run in the mid-season part of the schedule as racing gets back underway in what will be the first mile event of the year, and it will be time for all of the complainers, moaners and whiners to dummy up as the best racing on two wheels in the world leashes itself on what will surely be a sold-out and standing room-only crowd at the Circle Bell Motorsports and Bob Bellino-promoted facility in north central California.

One of the best promoters and group of people in the business, the Bellino-led group at CBM could only be considered second to the great group of people with the IMDA who put on the legendary Springfield Mile races twice each year.  Bellino and his entourage are used to putting on first-class and almost-always sold-out events on the left coast, so if you are in the area or even remotely close, you definitely owe it to yourself to head to Sacto to take in what will be a whirlwind day of high-speed drafting in the confines of the Cal Expo facility.

Heading up the list of entries this year is returning-to-the-track 2012 AMA Grand National Champion Jared Mees, who after suffering a broken arm in a regional race crash in mid-June is poised to hop back on his Kenny Tolbert-tuned Rogers Racing H-D XR750 to try and pull out what he can to work on defending his title from last season.

There are a whole handful of others who could spoil the party, but the one man who has dominated at Sacramento the last two years is Bryan Smith.  Michigan resident Flyin' Bryan took the 2011 honors at Cal Expo riding his family-tuned Moroney's Fasthog.com XR750, and then wowed the crowd on-hand last year by winning his first event for his new team riding the rocketship known as the Crosley Radio/Howerton Motorsports Kawasaki.  With the rules changes made over the off-season to offset any weight differential in the class and a restrictor mandate that threw another 1mm nod to the throngs of XR750 contenders on the mile could help to level out the playing field in what some considered an 'unfair advantage' during the 2012 season.  Time will tell if this will make the difference or if master engineer and bike designer Rick Howerton had another trick up his sleeve as he promised late last year.

The weather looks to be good for the left coast crowd tomorrow, so the adventures of Mother Nature that have plagued the riders, teams and sponsors in The Rolling Thunder Show while on their Midwest swing earlier in the summer shouldn't be a factor come go time tomorrow afternoon.

So even if you aren't in the area, you can still keep up with the action besides following the great coverage from Miriam Deitcher's Flat Track Live or via just AMA Pro Flat Track's Live Timing and Scoring read-outs.  It's a no brainer folks, tune in and turn on to what will be a super show in Cali as AMA Pro Flat Track gets to rockin' and hits it's stride after a lull in the schedule due to the rainy late spring/early summer in the Midwest!

Racing is scheduled to start at 5:15 EDT/2:15 PDT with the first practice sessions of the day for round 5 of the 2013 AMA Pro Flat Track presented by J&P Cycles Grand National Championship season on Saturday, July 27.  It's almost time to strap in, hang on and let 'er rip!

In the shot above from the Springfield Mile I in May 2012, riders on the front row get the signal from AMA Pro Flat Track's official signal-caller, Kelly Bell, to head out on their sighting lap for what will be a thrill-show ride of a day in the 25-lap Grand National main event at the Illinois State Fairgrounds-hosted event.

Kenny Coolbeth, Jr. on the #2 Screamin' Eagle Factory H-D XR750 leads off the line with Jake Johnson on the #1 Zanotti Racing XR ready to follow suit.  Eventual event winner Willie McCoy on his #59 H-D of Wausau XR, Bryan Smith on the #42 Crosley/Howerton Kawi, Luke Gough on the #62 Eaken Racing Kawasaki and Jared Mees on the #9 Rogers Racing XR750 get ready to follow up and get ready for a fast day at the track considered to be the hall of legends by many in The Rolling Thunder Show.

You can check out the preview press release below from AMA Pro Flat Track as you get ready to watch and follow what will be another super day of racing in California!


SACRAMENTO, Calif. (July 26, 2013) - The time has come. Round 5 on AMA Pro Flat Track presented by J&P Cycles' calendar is set to commence this Saturday, July 27, 2013, at the Cal Expo in Sacramento, Calif. with gates opening as early as 1:30 p.m. local time. Riders and fans alike have been waiting for this highly anticipated weekend for quite some time now as the Sacramento Mile is always one of the most intriguing races on the schedule every year. 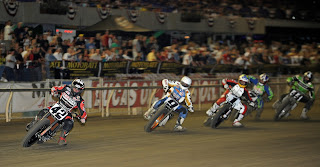 Bryan Smith #42 leads Jared Mees #9, Jake Johnson #1, Sammy Halbert #7 and Brandon Robinson #44 during the running of the Sacramento Mile in July 2012.  Smith took the win, his first for his new Crosley Radio/Howerton Motorsports Kawasaki team, which led to his capturing three events on the season and winning the 2012 AMA Pro Flat Track Grand National Twins Series Championship in October.  Could this be Flyin' Bryan's 3rd win-in-a-row at Sacramento, after winning in 2011 aboard his and his father Barry's Moroney's XR?  Only time will tell.  AMA Pro Flat Track photo by Dave Hoenig.
Brad Baker has been the talk of the town, and rightfully so, ever since his complete domination at Hagerstown during Round 4. Baker won his heat race, the Dash for Cash, and went on to maul the competition by over six full seconds in the main event to seal his first career victory at the Grand National Expert level. Now that the elephant has left the room and the criticism about when he might get that first win has come to a sudden halt, the potential for Baker to rip off several wins in the near future seems very real at this point.
In all things sports, one man's success is usually another man's failure. Brandon Robinson will be looking to bounce back at the Sacramento Mile after a lackluster performance at Hagerstown left him with a 17th place finish and knocked him out of the lead in this year's Overall Grand National Championship current point standings. The good news for Robinson is he did manage to finish in the top ten in last season's main event at the Cal Expo.
Arguably the biggest favorite to claim the coveted Sacramento Mile checkered flag this weekend is Bryan Smith. Though Smith has yet to find victory lane thus far in 2013, the Michigan product is licking his chops thinking about the mile-long course. Smith is notorious for using the power of his Kawasaki to pull away on the back and front stretches and is last season's victor of the prestigious race.
Another significant headline leading up to the weekend is the return of Jared Mees. The defending Grand National Champion was forced to watch Round 4 at Hagerstown from the sidelines because of an injury to his arm but has recently been cleared by doctors to compete this weekend. Expect the No. 1 Rogers Racing/Harley-Davidson pilot to be in his usual championship caliber form come this Saturday when the lights go green.
AMA Pro J&P Cycles Pro Singles
Wyatt Maguire currently sits atop the 2013 AMA Pro J&P Cycles Pro Singles point standings and looked sharp last round with a second-place finish at Hagerstown. With a top-ten finish under his belt at last year's Sacramento Mile, the Mead, Wash. native should be feeling pretty confident heading into the weekend.
There's no denying that defending J&P Cycles Pro Singles champion Stephen Vanderkuur hasn't had the kind of year he's hoped for at this point in the season. The Davison, Mich. rider started 2013 with an 18th place finish at Daytona and even though he has a couple of top-five finishes to his credit so far, Vanderkuur is certainly hungry to turn his season around at Sacramento this weekend and improve on his current 7th place position in the points.
Additional Contingency Available to Riders
As if there needed to be any added components to help build up the already prestigious event, it was recently announced that an additional contingency payout will be granted to raise the stakes even higher for this weekend's festivities. More information on this can be found by visiting http://www.amaproracing.com/ft/news/index.cfm?cid=57372.
AMA Pro Live - Live Streaming Video
Fans can catch basic free live streaming of the Sacramento Mile beginning with the first practice round scheduled to run at 5:15 p.m. ET/ 2:15 p.m. PT through the end of the Opening Ceremonies at 9:45 p.m. ET/ 6:45 p.m. PT. The streaming will include PA audio feed from Barry Boone and Scottie Deubler as well as one to three static cameras spread out across the venue.
At the end of Opening Ceremonies at approximately 9:45 p.m. ET/ 6:45 p.m. PT, premier access featuring television-like coverage of the races will be available for $4.99. Viewers can log on to AMA Pro Live at www.amaprolive.com/ft/ during the event for access and more information regarding the live streaming coverage.