LEXINGTON, Ohio (July 14, 2013) - Monster Energy Graves Yamaha's Josh Hayes took the checkered flag 4.878 seconds ahead of his up-and-coming teammate Josh Herrin in Sunday's AMA Pro National Guard SuperBike final. Unfortunately for Hayes -- and to Herrin's good fortune -- the Mississippian actually required a margin of five seconds to fully make up for the penalty he was given for jumping the start. As a result, Herrin was awarded his second-career premier-class victory to conclude the Buckeye SuperBike Weekend presented by Dunlop Tire at Mid-Ohio Sports Car Course.
In its early stages, the 21-lap contest looked as if it would shape up to be a thrilling three-man dogfight for the win. Hayes ran in first but was shadowed by both Herrin and National Guard Jordan Suzuki's Roger Hayden over the opening eight laps. However, the race was delivered a pair of big twists moments later; Hayden ran off track, overshooting the hard-braking Turn 6, at nearly the same time that Hayes was judged to have jumped the start and assessed his five-second penalty.  Informed of the situation by his crew, the defending triple champ immediately went to work in an attempt to shake Herrin and assemble the requisite gap on track. However, Herrin's recent efforts, which included running lap after lap by himself during practice and qualifying this weekend in order to improve his clear track pace -- allowed him to cling onto Hayes for an extended period and then maintain lap times that proved just strong enough even after the champ pulled clear and eliminated Herrin's ability to gauge off his teammate's rear tire. 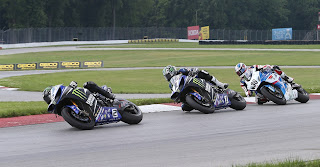