LEXINGTON, Ohio (July 12, 2013) - AMA Pro National Guard SuperBike champ Josh Hayes continued his perfect record in 2013 GEICO Motorcycle AMA Pro Road Racing qualifying sessions today to open the Buckeye SuperBike Weekend presented by Dunlop Tire at Mid-Ohio Sports Car Course.  Hayes actually found himself in the unfamiliar position of chasing the leader with less than ten minutes remaining in the session, but the Monster Energy Graves Yamaha ace threw down a 1:25.986 lap to lay claim to provisional pole.  Despite the unusually stiff resistance, everything went pretty much to plan on Friday according to the Mississippian. After qualifying Hayes said, "No complaints -- it's been a decent day... The 600 guys are breaking their own track records; we're still a little bit off of that. I'm feeling pretty good though.
"I got in a good string of laps -- right close to race to race distance -- at the beginning of qualifying. It's our fourth race of the year but I still feel a little out of practice, so I just kept doing laps. I didn't really know what I would change on the motorcycle so I decided to stay out and use the opportunity to do as many laps as possible. I was trying to come up with some good marks, be repetitive, and put in a good string of laps. I think did 10-12 laps all within three or four tenths, so that was good. I feel good on the bike and I'm looking forward to tomorrow."  Yamaha teammate Josh Herrin was the man Hayes had to overcome to put his name atop the leaderboards. The SuperBike sophomore's strong Friday pace bodes well for the weekend ahead as the developing star is more accustomed to playing catch-up after getting slow starts in FP1 and QP1.  Herrin actually had to claw his way back into second after holding down first minutes earlier. After Hayes knocked him down off the top of the charts, Jordan Suzuki's resurgent Danny Eslick stole second from Herrin, sneaking in a quick lap while running on Hayes' heels. Herrin countered in short order, lowering his time to a 1:26.218 to edge ahead of the Oklahoman's 1:26.222. 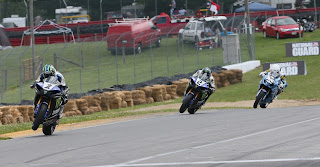