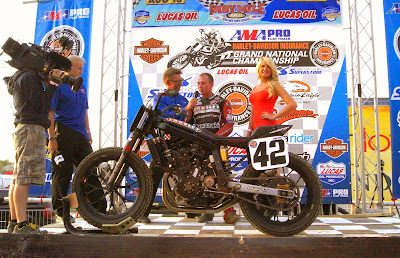 In what will be seen as a great move for the sport, AMA Pro Flat Track and Circle Bell Motorsports, the promoters of the Sacramento Mile, announced today that the first mile event of the season this Saturday, July 27 will be available to fans to see as pay-per-view live streaming video of the day's entire event.  Starting with the first heat race of the evening, round 5 of the 2013 AMA Pro Flat Track presented by J&P Cycles Grand National Championship season from the Cal Expo Fairgrounds will be available for everyone and anyone interested in tuning in to what will surely be a great high-speed show from the west coast.

With the absence of a TV package this season, after no agreement was forthcoming between AMA Pro Flat Track and MavTV after last year's coverage of The Rolling Thunder Show, the only event to get any airtime this year was the season-opening rounds at the Daytona Short Track on March 14-15.

But with SpeedTV going by the wayside after morphing into the Fox Sports 1 Network and all but dropping motorcycle racing coverage except for the MotoGP Championship, the many fans of AMA Pro Flat Track were left without any more live or delayed race coverage, and since that time, fans and followers all around have complained and moaned about the lack of quality coverage for what is arguably the greatest racing series on two wheels in the world.

Well, the bi..hing and moaning can stop now that the great crew from Bob Bellino's Circle Bell group, AMA Pro Flat Track and Will Fulford from The Fast and Dirty.com have come together with a package that will surely interest, entice and help to silence the naysayers.  In what hopefully will open the door for future broadcasts, these folks have gone all out to provide what should be super coverage of The Rolling Thunder Show at one of it's premier facilities.

Anyone familiar with Will and his wife, Yve Assad and their great work over the last few seasons to promote AMA Pro Flat Track, is already familiar with the great quality and high level of work and enthusiasm that they put into and give back to the sport.  This is a no-brainer folks, the coverage should and will be top-notch all around with Captain Will at the helm.  And not a better person or group of people around to helm this great project in my humble opinion!

So tune in and turn on this Saturday to see the stars of AMA Pro Flat Track as they take on the Sacramento Mile in the first mile event of the season and the first time fans will be able to view live streaming video on a pay-per-view basis for the best racing show there is.

In the shot above, while the MavTV crew rolls the camera, Bryan Smith is interviewed by AMA Pro Flat Track official announcer Barry Boone (who will be providing his great voice along with Scottie Duebler this Saturday at Sacramento) after winning heat race #1 at the Indy Mile during round 10 of the 2012 AMA Pro Flat Track Grand National Championship season on August 18.

Smith took the #42 Crosley Radio/Howerton Motorsports Kawasaki to the win in his heat that evening, along with the Dash for Cash win before battery troubles sidelined him and the team just past the halfway mark in the 24-lap National main at the Indiana State Fairgrounds-hosted event.

Flyin' Bryan will be looking to add his name to the history books this Saturday should he and the rocket Howerton Kawasaki be able to pull off another big win at Sacto, which would make it three-in-a-row for the Michigan resident at the Cal Expo-hosted event, and two-in-a-row for the Indy-based team that won their first event together last season in late July in the left coast event before going on a tear that would see Smith and the powerhouse Howerton team win the 2012 AMA Pro Flat Track Grand National Twins Series Championship after winning three events on the season in their debut together in The Rolling Thunder Show.

Of course, with the rules changes over the off season mandating 315 lb. minimum weight limits all around and a 1mm restrictor advantage being given back to the Harley-Davidson XR750 troops, this season could be different.  But if I was a betting man, I sure wouldn't bet against Smith on the Kawi rocket.  His record on a mile track, alone, speaks for itself, and you can bet that the Rick Howerton-led team has done their homework during the off-season and the differential will all but even out when the checkered flag falls late Saturday night.

While you are calling your bookie in Vegas, check out the full press release below from AMA Pro Flat Track and Circle Bell Motorsports about the great news coming your way this weekend to be able to watch and enjoy the greatest racing on the planet as it unfolds before you live.


The following press release is being sent out on behalf of Circle Bell Motorsports, promoters of the Sacramento Mile:
SACRAMENTO, Calif. (July 25, 2013) - Circle Bell Motorsports and AMA Pro Racing are pleased to announce that this year's AMA Pro Sacramento Mile, July 27th at Cal Expo,  presented by Miller Lite and brought to you by Greg Padilla Bail Bonds and SDI Insulation will feature live full-production streaming video of the AMA Pro Flat Track presented by J&P Cycles event.
Working in conjunction with AMA Pro Racing, Gary Scharlach Media Services, and Will Fulford of The Fast and Dirty, the Sacramento Mile Premium Access Live Streaming Video will allow fans to watch all of the thundering action just as if you were in the grandstands.
Beginning at 5:15pm Eastern/2:15pm Pacific, fans around the world will be able to log on to AMA Pro Live at http://www.amaprolive.com/ft/ to watch basic streaming of timed practice and qualifying, which will include static camera shots of the track and the PA audio feed from announcers Barry Boone and Scottie Deubler. 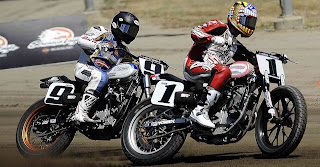 Jake Johnson on the #1 Zanotti Racing XR750 and Jared Mees on the #9 Rogers Racing XR battle during an AMA Pro Flat Track Grand National Championship round during the 2012 season.  AMA Pro Flat Track and Circle Bell Motorsports, the promoters of round 5 of the 2013 AMA Pro Flat Track presented by J&P Cycles Grand National Championship season at the Sacramento Mile, announced today that they will be offering live streaming video on a pay-per-view basis for this Saturday's event at the Cal Expo Fairgrounds.  Fans all around will be able to experience the live action on-track as it happens thanks to this new venture being promoted by Circle Bell, Will Fulford from The Fast and Dirty.com and AMA Pro Flat Track.  AMA Pro Flat Track photo by Dave Hoenig.
At the end of Opening Ceremonies at approximately 9:45pm Eastern/6:45pm Pacific, fully produced live streaming of the rest of the event will be available for only $4.99. Featuring four broadcast cameras, this live television-like production will enable you to get up close and personal with non-stop action-packed coverage of all Heat Races, Semi races, the Last Chance Qualifier, the Dash for Cash, the Main Events for both the Experts and the Pro Singles, and all podium interviews.
Available through SacramentoMile.com and AMAProLive.com, this coverage is something you won't want to miss.  Be sure to tune in and watch this pivotal moment for AMA Pro Flat Track and the Sacramento Mile presented by Miller Lite and brought to you by Greg Padilla Bail Bonds and SDI Insulation.
"We are thrilled to provide Premium Access Live Streaming Video to flat track fans around the world.   The talented riders and faithful sponsors of the sport will receive the excellent coverage they deserve," says Bob Bellino, president of Circle Bell Motorsports.  "Having this type of exposure is another step forward in elevating the sport we love."
Posted by Stuman714 in Indy at 6:30 PM