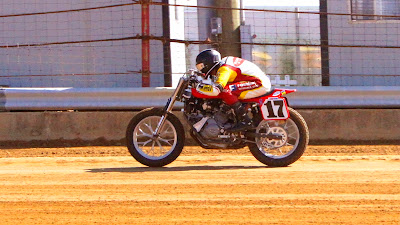 With the rain delays and cancellations in the 2013 AMA Pro Flat Track presented by J&P Cycles Grand National Championship season taking a front seat to the great action in the series that saw an almost 2-month break in the great racing in the series between round 3 at the Stockton Half-Mile on May 11 and round 4 at the Hagerstown Half-Mile on July 6, one thing fans, teams, riders and sponsors are really ready for is to get to round 5 at the Sacramento Mile on July 27 and to get back on-track, both literally and figuratively speaking.

In a year that has seen it's share of off-track distractions created by Mother Nature and by the loss of the Grays Harbor round as announced by the track last week, everyone is looking to get the hard and soggy times behind them in order to get down to what everyone wants to get down to--some serious racing in The Rolling Thunder Show.

And with the Bob Bellino-led Circle Bell Motorsports, promoters of the Sacramento Mile coming up in just nine days time, you can bet that the action will be hot and heavy and the event will mark another excellent venture by the folks on the west coast who know how to promote and help put on a great show, as they have shown they know how to pack the house with paying butts in the seats when the greatest racing show on two wheels in the world makes it's west coast swing.

As we make the run up to that great show, Circle Bell has released a great press release highlighting one of the top names and top teams in the sport with the Lloyd Brothers Motorsports Ducati team's Henry Wiles, as he talks about what it's like to take a flier on the big oval at the Cal Expo Fairgrounds in Sacto.

Hammerin' Hank will be unleashing the massive top speed of the big red Ducati at Sacramento on July 27--as he will be for the remainder of the events this season.  According to LBM crew chief, Brent Armbruster, the LBM team's original intentions were to run the team's XR750 at Lima and at Grays Harbor, and then concentrate the rest of the season on the big Ducati.  We got a chance to talk while watching the rain fall at the Lima Half-Mile on Saturday, June 29, the day the race was originally scheduled to be run, before it was officially canceled the next morning due to the deluge the area got overnight.

According to master wrench and Michigan resident Armbruster, who is now tasked with caring for the LBM team's fleet at his home in Clio, the team used the XR750-owned by one of the team's sponsor, Ramspur Winery-for the half-mile events on the season's calendar at the beginning of the season.  But with the rain cancelation at Lima and the event cancelation at Grays Harbor, they will now be utilizing the big Ducati for the remainder of the events on the schedule, including the lone remaining half-mile at Pomona, to close out the season.

In the shot above, Henry makes a qualifying run during one of the qualifying sessions on the #17 Lloyd Brothers Motorsports/Ramspur Winery/Foremost Insurance Group/ENI USA-sponsored Ducati at the Indy Mile on August 18, 2012.  Wiles had one of his best-ever finishes of the 2012 season at Indy, bringing the machine home in the 4th-place spot after qualifying 11th and finishing in 4th-place in heat race #2 in front of a packed house at the Indiana State Fairgrounds-hosted facility.

So check out the press release below thanks to Circle Bell Motorsports and if you're going to be in the Sacramento area, whether you have plans or not, you need to get to the Cal Expo Fairgrounds to check out Henry Wiles and Lloyd Brothers Motorsports team and the rest of the stars of The Rolling Thunder Show in what will undoubtedly be a great day of racing that you DON'T want to miss!

You can also check out Circle Bell Motorsports' official site here to find out more about round 5 of the 2013 AMA Pro Flat Track presented by J&P Cycles Grand National Championship season.

And you can get your ticket orders placed here, which will save you big $$ as opposed to waiting to get them the day of the race, and save yourself not only money but having to go through that last-minute scramble and wait at what will surely be some seriously long lines at the box office.

Press release courtesy of Circle Bell Motorsports, the promoters of round 5 of the 2013 AMA Pro Flat Track presented by J&P Cycles Grand National Championship season at the Sacramento Mile on Saturday, July 27. 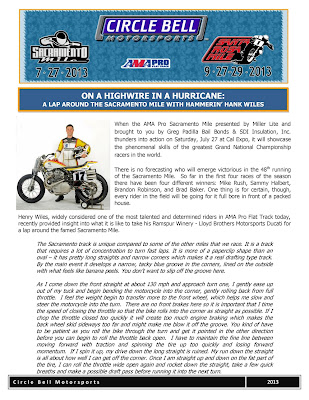 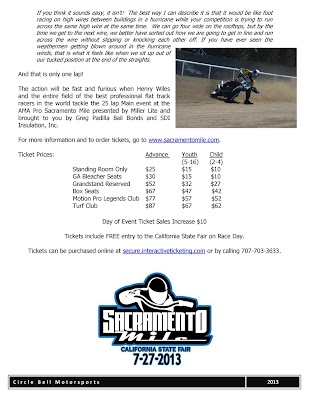