DAYTONA BEACH, Fla. (July 11, 2013) - There are only two more races remaining for the AMA Pro Vance & Hines Harley-Davidson Series contenders to claim a spot as one of the ten qualifiers for the $60,000 XR Showdown.  That makes this weekend's GEICO Motorcycle AMA Pro Road Racing event -- the Buckeye SuperBike Weekend presented by Dunlop Tire at Mid-Ohio Sports Car Course -- especially vital for a number of title hopefuls who are attempting to fight their way in for a shot at the prize. 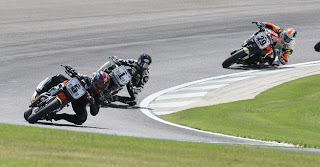 Steve Rapp on the #5 Suburban H-D-sponsored XR1200 leads 2012 AMA Pro Vance & Hines XR1200 Series Champion Michael Barnes on the #1 Spyke's H-D-sponsored mount, with Tyler O'Hara on the #29 Eco-Fuel Saver-sponsored XR right behind during the running of round 3 of the 2013 AMA Pro Vance & Hines Harley-Davidson Series at Barber Motorsports Park on June 23.  Rapp took the win, his second in a row after romping at Road America in early June, while Barnes holds a slim 1-point lead in the overall point standings heading into Mid-Ohio's round 4 this weekend.  AMA Pro Road Racing photo by Brian J. Nelson.

The big names at the top of the order after three races are sitting relatively pretty. Steve Rapp (No. 5 Suburban Harley-Davison) has been the story at the previous two rounds as the versatile one-time DAYTONA 200 winner comes into Ohio following consecutive runaway victories.  Rapp's heroics have allowed him to surge to within a single marker of the title lead despite earning zero points at the season opener. Reigning class champion Michael Barnes (No. 1 Spyke's Harley-Davidson) currently retains that slim advantage thanks to his consistently strong performances this season; while Barnes is still seeking his first victory since brandishing the #1 plate on the front of his XR1000, the resilient pilot has been picking up steam as the season's progressed. He has decades of Mid-Ohio experience, which he put to good use to win pole at the venue last season, and will be seeking to snap Rapp's recent run of dominance this weekend.
Tyler O'Hara (No. 29 Eco Fuel Saver/Scrubblade), who led the most laps en route to winning at Mid-Ohio one year ago, is expected to be in the mix once again. O'Hara is currently ranked third, seven points down on rival Barnes, and thus well positioned to make a push over the season's final four races after the points of the top ten riders are leveled at 1000.  Rapp's teammate, Ben Carlson (No. 45 Suburban Harley-Davison), and up-and-comer Travis Wyman (No. 24 Harv's Harley-Davidson) have also proven to be regulars in the top five and week-to-week threats to take pole positions and podium placings.
Barnes, Rapp, O'Hara, Carlson, and Wyman have firmly established themselves as the leading five riders in this year's AMA Pro Vance & Hines Harley-Davidson Series field and will likely be dicing for top honors once again this weekend. However, with the XR Showdown looming, attention will shift in part to those attempting to either hold onto or steal away one of the spots in the championship's bottom half of the top ten.
Only nine points separate seventh from 17th, and riders ranked even lower still have a realistic shot at earning their way in with two outstanding efforts.
Barrett Long (No. 2 Longevity Racing), Shane Narbonne (No. 46 Mob Racing), Ricky Parker (No. 96 ChiliPepper Racing) and Nicholas Hansen (No. 97 H&S Distributors) are just a few of the talented racers looking to secure a spot in the XR Showdown and then make waves over the season's decisive final four races.
TV Broadcast Schedule
This weekend's GEICO Motorcycle AMA Pro Road Racing action will be broadcast on CBS Sports Network as part of the CBS Sports Spectacular. The coverage will begin Saturday, July 13 at 1:30 p.m. ET/ 10:30 a.m. PT with the weekend Preview Show, followed by AMA Pro GoPro Daytona SportBike Race 1 at 2:00 p.m. ET/ 11:00 a.m PT and then LIVE coverage of AMA Pro National Guard SuperBike Race 1 at 3:00 p.m. ET/ 12:00 noon PT. Televised coverage of the event will pick back up on Sunday, July 14 at 2:00 p.m. ET/ 11:00 a.m. PT with GoPro Daytona SportBike Race 2 and will conclude with a LIVE broadcast of National Guard SuperBike Race 2 at 3:00 p.m. ET/ 12:00 noon PT. Fans can find CBS Sports Network on their TV by using the channel finder at http://www.cbssportsnetwork.com/channel-finder.
Live Streaming Schedule
In addition to the live broadcasts on CBS Sports Network, AMA Pro Live will be live streaming multiple channels of behind-the-scenes video of the weekend's activities alongside Live Timing & Scoring. AMA Pro Live puts fans in the director's chair, allowing them to choose from a variety of viewpoints including track cameras, paddock cameras and a press conference channel. Streaming will begin with coverage of the weekend's practice and qualifying sessions on Friday, July 12 at 11:00 a.m. ET/8:00 a.m. PT at http://www.amaprolive.com. High Definition streaming of National Guard SuperBike Final Qualifying will begin on Saturday, July 13 at 9:40 a.m. ET/6:40 a.m. PT.
Social Media Channels
All weekend long, stay connected with GEICO Motorcycle AMA Pro Road Racing on social media at http://twitter.com/AMAProSBK and http://www.facebook.com/AMAProRoadRacing.
Tickets
Tickets for this weekend's Buckeye SuperBike Weekend presented by Dunlop Tire start at just $30 and are available for purchase on the Mid-Ohio Sports Car Course website at http://www.midohio.com/Schedule/Buckeye-Superbike-Weekend-2013.
About GEICO Motorcycle AMA Pro Road Racing:
GEICO Motorcycle AMA Pro Road Racing is the premier motorcycle road racing series in North America and is universally regarded as one of the most competitive road racing organizations in the world. The 2013 schedule consists of nine rounds of competition on the country's finest road courses. The Series is comprised of four production-based classes: AMA Pro National Guard SuperBike, AMA Pro GoPro Daytona SportBike, AMA Pro Motorcycle-Superstore.com SuperSport and the AMA Pro Vance & Hines Harley-Davidson Series. Learn more about GEICO Motorcycle AMA Pro Road Racing at www.amaproracing.com/rr/.