AMA Pro Racing announced late yesterday that the Circuit of the Americas facility, located in Austin, TX., will play host to a new points-paying race early next year that will run alongside the COTA MotoGP Weekend and the MotoAmerica Road Racing series that is scheduled over the April 8-10, 2016 weekend.

COTA established itself as a very worthy host for the AMA Pro Flat Track Grand National Championship during the 2015 season while playing host to the first-ever ESPN XGames competition featuring the stars of The Rolling Thunder Show in early June. Dan Johnsen, former AMA Pro Flat Track manager and his team did a wonderful job of prepping the facility with a limited time schedule after the area had been inundated with torrential rain storms just days before the event was set to roll off.

Less then one week before the event was held, the facility had been under over 6-8" of water yet DJ and his team were able to groom a track that, albeit extremely rough, was able to host the inaugural race in the ESPN Flat Track XGames. The race eventually was viewed by nearly 500K fans on live tv on ESPN in a special 3-hour hosting in prime time on the largest sports cable television network for it's initial airing.

In the shot above, riders roar off the line during heat race #2 at round 7 of the 2015 AMA Pro Flat Track Grand National Championship Harley-Davidson GNC1 presented by Vance & Hines series at the Indy Mile on July 11.

Although the full 2016 schedule for the AMA Pro Flat Track Grand National Championship has yet to be released by the powers that be in Daytona Beach, the addition of this round in Austin, TX. will be a very welcome site to all of those involved, and that schedule should be forthcoming sometime in the next week or so. We do already know that Daytona will kick off the season next year in March, that both Springfields are set to return, as are Lima and Peoria, and Charlotte. We also know that Indy and DuQuoin are gone and it sounds like Hagerstown has been dropped as well. There has also been some buzz that there is another event awaiting finalization somewhere in central Indiana, but nothing solid has been confirmed as of yet as to where or when (and NO, it's not Terre Haute thankfully!)

The Austin/COTA round will also be promoted by Team SMI, the same group of great people behind the Sacto Mile, Charlotte Half-Mile and the season-ending Las Vegas Short Track and Superprestigio of the Americas, so you know it will be a first-class effort all around.

Check out the full press release below thanks to AMA Pro Racing and make your plans now to head to COTA in Austin, TX. over the April 8-10 weekend to see the greatest racing on two wheels in the world alongside the stars of MotoGP and MotoAmerica. 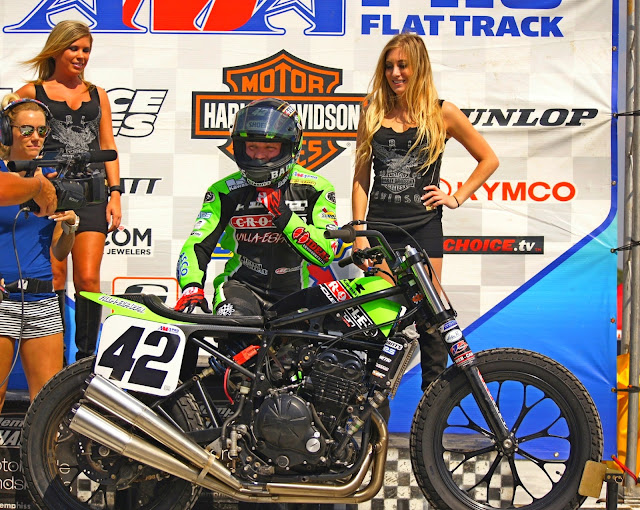 Pre-sale tickets went on sale last week for the running of the 2016 AMA Pro Flat Track Grand National Championship event at the Sacramento Mile scheduled for Saturday, May 21. This pre-sale is open for previous holders of tickets at the Cal-Expo hosted event, and regular ticket sales will open up this week on Thursday, December 10.

The Sacto Mile is always guaranteed to be a thrilling event, and 2016 will see whether or not Bryan Smith and the Howerton Motorsports Kawasaki team can extend Flyin' Bryan's win streak to six in-a-row. Smith won the first event of his streak in 2011 while riding his and his father Barry's Moroney's H-D sponsored XR750, and then has continued his streak since 2012 while riding for Rick Howerton and the Howerton Motorsports and Villa-Esparza backed team.

In the shot above, Smith starts to unbuckle his helmet after winning heat race #2 during the 2015 AMA Pro Flat Track Grand National Championship Harley-Davidson GNC1 presented by Vance & Hines class at the running of the Springfield Mile II on September 6 while riding the potent #42 Howerton Motorsports/Villa-Esparza/Kawasaki-backed EX650. Smith went on to win his second Springfield Mile event of the season later in the day to go along with his earlier win in the season at the Sacto Mile, among others this year.

Don't be shy and get on the line now as a ticket to the 2016 running of the Sacramento Mile will be in big demand as those who have witnessed it will tell you, and with Flyin' Bryan going for his 6th-straight win in Sacto it will be a historical event for the fans of AMA Pro Flat Track!

You can get all of the info below thanks to SMI, the promoters of the Sacramento Mile.


Press release courtesy of SMI, the promoters of the Sacramento Mile, Charlotte Half-Mile and the 2015 season-ending Las Vegas Short Track and Superprestigio of the Americas.

RENEW YOUR SEATS AT THE SACRAMENTO MILE


SACRAMENTO, CA (Dec. 3, 2015) -- Fan Appreciation Pre-Sale tickets for the 2016 Sacramento Mile begins today, Thursday, Dec. 3, 2015 and ends on Dec. 9, 2016. This gives previous ticket holders the perfect opportunity to give the gift of tickets to one of the premier races on the AMA Pro Grand National calendar in 2016, and insures ticket holders from the 2015 event have the opportunity to renew their favorite seats.
The 2016 race, which takes place on Saturday, May 21st, 2016, will be the 51st running of the historic Sacramento Mile. Bryan Smith will try to extend his record winning streak at the race to six, while the rest of the talented field will be shooting to end Smith’s impressive string of victories.
This initial pre-sale is open only to 2015 ticket holders and this Fan Appreciation Pre-Sale will end on Wednesday, December 9th.
These tickets are only available via phone sales.
Call 1-844-SAC MILE (722-6453). Phone lines will be busy early in the sale. Leave a message and you will receive a return call within 24 hours.
Beginning on Dec. 10, 2016, remaining tickets will be available online or by phone on a first come, first served basis. Starting at that point seats will no longer be held from prior years' attendance. Advance Adult Tickets start at $29. Space is limited, so buy early and secure your ideal seat to cheer on your favorite rider. 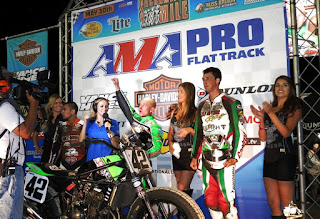 Bryan Smith celebrates on the podium after winning his 5th-straight Sacramento Mile in May 2015 along with 2nd-place finisher Brandon Robinson and 3rd-place finisher Jared Mees. Tickets for the May 21, 2016 running of the Sacto Mile went on sale last week. Photo courtesy of SMI by Larry Lawrence.
We continue to offer FREE Motorcycle Parking to our fans who ride to the Miller Lite Grandstands at Cal Expo in Sacramento. All Children and Youth Standing Room Only admission will be FREE again this year with a properly ticketed Adult.
Our hugely favored Turf Club, Legends Club, and Box Seats continue to be the premiere sought-after seat. These sections will fill up early. Don't delay as these seats may not be available closer to the event date.
The AMA Pro Grand National Championship series is one of the longest running motorcycle racing championships in the world. On the long straights of the Sacramento Mile top speeds can reach 130 miles per hour. Flat track racing has produced many of America’s Motorcycle Grand Prix Champions such as Kenny Roberts, Eddie Lawson, Wayne Rainey, Kenny Roberts, Jr. and Nicky Hayden. Visit www.sactomile.com to keep up with all the latest on the event.
For additional series info visit: www.amaproracing.com/ft
Visit us at: http://www.sactomile.com/
Via Facebook: https://www.facebook.com/SactoMile
Twitter: https://twitter.com/sactomile
YouTube: http://www.youtube.com/user/sactomile
---
*** 2016 Ticket Information: Ticket information is available for the May 21, 2016 Sacramento Mile at www.sactomile.com.
--
Larry Lawrence
c. (317) 332-3899
SMI Media Rep
Sacramento Mile - May 30
Charlotte Half Mile - Aug 29
Las Vegas Finals - Nov 20
lawrencemedia@hotmail.com