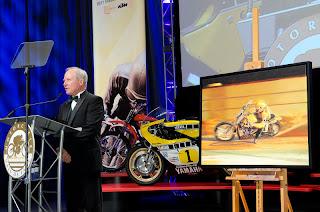 ﻿
Tyler O'Hara hauls his #29 Tyler O'Hara Racing XR1200 down into turn one at the Indianapolis Motor Speedway during testing for the AMA Pro Vance & Hines XR1200 Series event scheduled for just one week away in late August 2011.  As part of the Red Bull Indianapolis MotoGP weekend festivities, the XR1200 Series was making it's debut at Indy as the undercard to the 4th Annual MotoGP Indy outing, and Dorna and AMA Pro Road Racing were able to set-up a test session for the series to come in and get ready for their appearance at the international event.

O'Hara went on to win his first-ever event in the  AMA Pro Vance & Hines XR1200 Series at Indy some eight days later, and came home 3rd in the second race of the two-race weekend.  With his strong finishes throughout the 2011 season, O'Hara finished 3rd in the championship hunt behind '11 AMA Pro Vance & Hines XR1200 Series Champion Chris Fillmore, and runner-up Steve Rapp.

For the '12 season, O'Hara picked up a ride with Bartel's H-D for the XR1200 Series, and instantly made good with his new team, taking his #29 machine into 2nd-place at the season-opening round in Daytona behind winner Kyle Wyman, just .117 seconds back.  Last weekend at Road Atlanta, O'Hara triumphed in just his second race with the team to win the Big Kahuna round over runner-up Michael Barnes, and instantly making himself a threat to become the 3rd-ever AMA Pro Vance & Hines XR1200 Series Champion along with Danny Eslick and Fillmore.

Check out the full press release and the race recap video below, thanks to AMA Pro Road Racing! 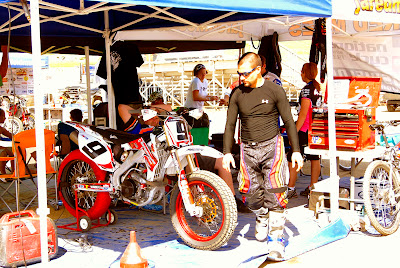 Jared Mees works about his pit area just before taking to the track for round 7 of the 2011 AMA Pro Flat Track Harley-Davidson Insurance Grand National Championship presented by Motorcycle-Superstore.com season at the Springfield TT on May 30.  Tuner Brent Armbruster can be seen sitting next to Mees' Honda.

Mees had a stellar day at the Illinois State Fairgrounds Multipurpose Rodeo Arena in winning his heat, and coming home in 2nd-place in the Dash for Cash event, and later in the day taking his #9 Montgomeryville Cycle Center/Lucas Oil/Rogers Lake Racing/Saddlemen-sponsored Honda CRF450R to the runner-up spot in the National main behind event-winner Jake Johnson.

One of the busiest and hardest-working men at and on the track, Jammin' Jared will look to add to his three race win streak at the 28th Annual Dairyland Classic AMA Flat Track event coming up on Friday, June 1 at the Sheboygan County Fair Park in Plymouth, WI.

Historically scheduled around the AMA Pro Road Racing round at Road America in early June, the event can all but be considered a 'mini' National, with last year's attendees including Sammy Halbert, Jethro Halbert, Chris Carr, Kenny Coolbeth, Jimmy Wood and Mikey Avila all making the Pro/Expert Main event before a solid crowd.  The races have also been shown over the course of the last couple of years on a tape-delayed basis on SpeedTV's Lucas Oil Motorsports show.

If you're headed to Road America for the AMA Pro Road Racing weekend, make sure you take the time to head down to Plymouth for the Dairyland Classic.  The Sheboygan County Fair Park is located just five miles south of Road America, so it is within easy access to the road race events happening just outside of Elkhart Lake, WI.

You can check out the event flyer below, courtesy of event promoter Bert Sumner. 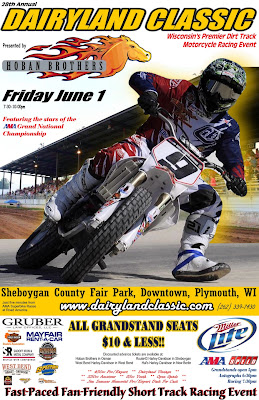 
You can check out all of the info for the 28th Annual Dairyland Classic AMA Flat Track race here via Bert Sumner's website:

Bert also has one of (if not THE) most complete record archives on the history of the AMA Grand National Championship.  You can see that here: