Sykes once more unstoppable in Tissot-Superpole


Assen (Netherlands), Saturday 21 April 2012 – Tom Sykes (Kawasaki Racing Team) was over a second faster than any of his rivals in a Tissot-Superpole contest run under ‘wet’ conditions. The wet Superpole rules dictated that there were two twenty-minute sessions only with the top eight riders only from Superpole 1 moving on to Superpole 2.


Despite being declared wet, the track surface during the second session in particular was almost completely dry, allowing Sykes to get to within less than half-a-second of the track best on his Ninja ZX-10R. This was his third Superpole win in succession this season, and Sykes’ fifth career Superpole win. Second fastest overall was the Honda of Jonathan Rea (Honda World Superbike Team) from Jakub Smrz (Liberty Racing – Team Effenbert) and Sylvain Guintoli (Team Effenbert – Liberty Ducati).


Tom Sykes: “A lot has gone on since the Imola test with Joan and so on, so hopefully this is making him smile. What can I say? A massive thanks to Kawasaki, three on the bounce is a fantastic feeling. I went out on my second qualifier today, saw I had some pressure from Jonathan so I dug deep and it paid off. We’ve got a good race setting, both wet and dry, third time lucky so hopefully we can covert this one to a race win tomorrow.” 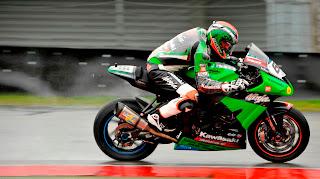 Jonathan Rea: “It’s the first time I’ve been up here this year and I’m pretty happy. That was a massive lap from Tom; we couldn’t match it today. When we put a qualifier on the bike, it transformed the front and I got a lot of chatter, but the good thing is tomorrow is that we use the race tyre. A big thanks to all the team for their continued hard work, it’s nice to come back and this result is for them.” 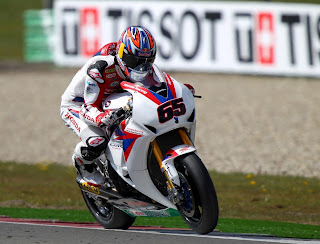 Jonathan Rea took the Honda World Superbike Team CBR1000RR to the second spot on the grid at Assen, 1.033 seconds behind Sykes.  Photo courtesy of the SBK World Championship.


Jakub Smrz: “I am happy for the third place because we had a problem yesterday with the engine, so I only made a few laps in the dry. Today was really strange and conditions were mixed but in the end I got the front row. We did a great job: fast in the rain and fast in the dry!”


Championship second place rider Max Biaggi (Aprilia Racing) missed out on Superpole qualification and will start from 17th place on the grid. A fall for Biaggi’s team-mate Eugene Laverty ruled him out of progression beyond Superpole one, and he went 14th on the grid, one place behind Canadian rookie Brett McCormick (Liberty Racing Team Effenbert).


Sam Lowes (Bogdanka PTR Honda) had his Friday best qualifying time to thank for his pole position at Assen, while second place rider Broc Parkes (Honda Ten Kate Racing Products) was another who could not improve his opening day pace in today’s final session. Jules Cluzel (PTR Honda) left it late to make sure he got third place on the grid, one ahead of top Kawasaki qualifier, Kenan Sofuoglu (DeltaFin Lorenzini). 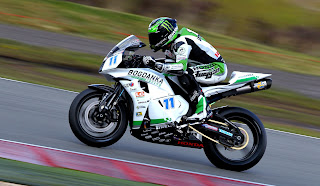 Sam Lowes again was atop the leaderboard on day 2 of the World Supersport Championship, taking pole at the Assen event on his Bogdanka PTR Honda CBR600RR.  Photo courtesy of the SBK World Championship.


Dutch rider Rob Hartog is the first poleman in the opening round of the second edition of the European Junior Cup, this year promoted by Austrian manufacturer KTM as a support category to World Superbike. The series has been devised for 14 to 19 year olds and is a valid entry category for youngsters to shape up to each other in eight international rounds. All riders are on identical KTM Duke 690 machines supplied by the manufacturer. Second place on the grid went to Garijs Rozkalns from Latvia and Adrian Pasek from Poland. The poleman is nephew of Wil Hartog, who in 1977 at Assen became the first Dutchman to win a 500GP race. Hartog went on to win a total of five races in the world championship.