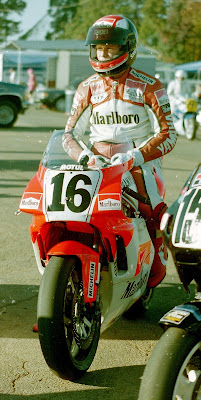 In the fall of 1990, Wayne Rainey had just clinched his first of three-in-a-row 500cc World Championships while riding for Kenny Roberts' Marlboro Team Roberts on the million dollar Yamaha YZR500 two-stroke (and team mate John Kocinski had just nailed the 250cc World Championship as well).

The King was also fielding a team in the States, but not in the AMA Pro Road Racing Series.  Due to what was then called a 'sponsor-sticker placement issue', Roberts walked away from the AMA and entered a team in WERA's F-USA Pro Series, the 'run what ya brung' road racing series that pitted 250cc two-strokes against methanol-burning big-bore four-strokes-and everything imaginable in between.  Future multiple and all-time AMA 250cc GP Champion Rich Oliver and South African Robbie Petersen (pictured above at Road Atlanta in Oct. '90) were tasked with competing in the popular series aboard some of Roberts's Marlboro-sponsored TZ250s.

Although the 'tiny' TZs were up to the task of competing, taking race wins against the might of 1100cc+ big-bore bikes was becoming another thing.  So The King, being The King that he is and always has been, took one of Rainey's championship winning 500s and set it up for the F-USA Series.  With team mate Oliver out injured late in the season (who would go on to win the '91 Formula USA Championship on one of the bikes), Petersen got a chance to show the bike's true colors at the season-ending WERA GNF races at Road Atlanta in late October/early November '90.

The bike actually debuted at the Indianapolis Raceway Park round, the penultimate stop on the series' schedule, in early October.  But as what was (and still can be) the usual case of fall race meetings in the midwest, the weekend was indundated with rain and cold on the day's final events and was postponed until the final stop of the season at the WERA GNF's at Road Atlanta in late October.  Petersen did get time on the bike at IRP, but just a few practice laps and a short, 5-lap heat race on the Saturday afternoon of the event (which of course, had beautiful midwest fall weather!)

Fast forward a couple of weeks, and hundreds of bikes, riders, sponsors, affiliates and teams and thousands of fans converged on the hilly Gainesville, GA. facility to take part in what was a rite of fall, the WERA Grand National Finals, coupled with the season-ending rounds of the Formula USA Pro Series at Road Atlanta over the course of the four-day event.

And you had the WERA big-name regulars on-hand, including Mike Smith on a Team Hammer Valvoline Suzuki (which he would not only win the Indy make-up round on but also clinch the '90 F-USA Championship with), the late Mike Harth, Andy Fenwick and Kevin Rentzell, just to name a few.

Petersen would take the #16 Marlboro Team Roberts Yamaha YZR500 two-stroke home into the 2nd spot in the Indy make-up round, but would come out on top over Russell's Muzzy Kaw at the final round at Road Atlanta in what would be some of the best racing I have ever experienced.  Listening to the high-pitched scream of the wailing banshee-like sound of the championship-winning Yamaha was unlike anything I've ever heard in comparison to the throaty roar of the big four-strokes of the day.

I first 'met' Mark Gardiner when he was writing his bitchin' Backmarker column for the now-defunct Road Racer X.com and print mag a little over four years ago.  Mark had done a column about the Honda AMA Flat Track team from it's inception with master-builder Jerry Griffiths (3-Time AMA Superbike Champion Doug Chandler's father-in-law) and the new design that Jerry had pre-purposed for competition use of Honda's CX-500 v-twin back in the late '70s/early '80s.

After reading, I sent Mark an e-mail and a few shots I had taken of then-flat track-also teamster Freddie Spencer, who had ridden (and baled) the bike in it's 750cc configuration at the summer running of the Indy Mile, as well as one I had of Jerry standing next to what was the destroyed prelude to Honda's later dominance in AMA Flat Track Grand National Championship racing in the mid-late '80s.

Since that time, Mark has been kind enough to seek me out occassionally for the use of some of my shots from back in the day, which have since been featured in the former Road Racer X (online and in print/May 2008) and recently online with Motorcycle-USA.com when writing about former '69 AMA Grand National Champion Mert Lawwill (fall 2011).

Well, Mark contacted me again while amidst his latest writings earlier this week, his April '12 Backmarker column about the now-defunct WERA Pro Series/F-USA Pro Series that originally started at Willow Springs Raceway in California in the mid '80s, and was later bought out and run by Evelyn Clark and WERA into the mid '90s +/-.

You can check out Mark's latest keyboard-pounding effort at Motorcycle-USA.com right here:

Here's another great look at the F-USA Series and Roberts' team, thanks again to Larry Lawrence and Cycle News' Archives column: