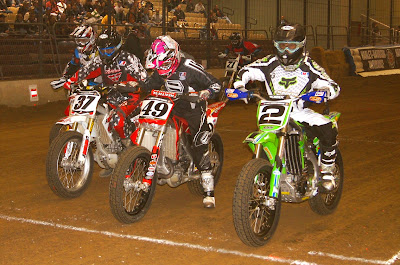 Round 3 of the 2011 AMA Pro Flat Track Harley-Davidson Insurance Grand National Championship presented by Motorcycle-Superstore.com season gets ready to kick into gear as riders for heat one line-up inside the Southern Illinois Center at DuQuoin on April 16.

Eventual heat, Dash for Cash and National main event winner Kenny Coolbeth, Jr. takes the pole via his fast qualifying time on his #2 Chaplin Kawasaki/Spectro Oils/Wiseco-sponsored KX450F, with Chad Cose rolling his #49 M.E.H. Corp/Arlen Ness/Bell Helmets-backed Honda CRF450R into the second starting spot.  In next comes Jimmy Wood on his #37 Southland Racing/M.E.H. Corp/Race Tech-sponsored Honda, with eventual Rookie of the Year Brad Baker working his way up to the line on the #12 ENI USA/REM/Arai Helmets-backed Honda.  Cose and Wood followed Coolbeth home in the heat getting a direct line to the National main, where they finished 10th and 9th respectively.  Baker would work his way out of one of the semi races to bring his Honda home in 7th.

On Saturday March 31, Californian Chad Cose loaded his '05 motocross bike up in his van and headed to the San Jose Indoor, going up against the likes of Kayl Kolkman, eventual event winner Jethro Halbert, Jared Mees and a host of other riders who made an event out of the indoor concrete track race at the San Jose Fairgrounds.

Hello Everyone,
This weekend I got the chance to stay pretty close to home as we had a local race in San Jose, California.  Every year San Jose Fairgrounds plays host to an indoor concrete short track to pay tribute to the legends of our sport and give some of us pros a chance to bang each other around for a decent amount of money.
This year Rod Lake didn't promote the race and put up the big purse we were accustomed to seeing over the last few years, however P&D Promotions kept the event going and offered a purse for the pro riders. There was about 6 or 7 National number guys on-hand and a flock of local guys ready to race what some call "a fist fight in a phone booth."  I didn't bring my National bike to the race, so we threw some flat track suspension on my '05 motocross bike and gave it a go.
After our one-lap qualifying session was said and done I ended up 7th overall.  This would line me up second over from pole in my heat race.  I got off the line 2nd and hounded fast qualifier Kayl Kolkman for the quick 7-lap heat race, falling about half a wheel short for the win at the finish. I ended up second but they only transferred the winner to the small 10-rider main event.
I pulled the holeshot from pole in my semi and went on to win to punch my ticket to the main.  You had to either win your heat race or semi during the whole program which meant everyone in the main was on their game.  My semi win would line me up second over from pole in the main event.  Our first start was red flagged after about 3 laps due to a couple riders going down.
Once we got the green and were going again I was sitting in 6th. I passed one rider and closed in on Jared Mees for 4th.  It looked as if Jared was having trouble with his bike, but eventually took over 4th and set my sights on 3rd.
I slowly began to reel in Mikey Rush for third and thought I had a shot at him when lapper Briar Bauman and him got together.  It was a little late as he settle back in for about 5 laps left.  The checkers flew and I crossed the line 4th.  It was definitely one of those deals where if you got out front you were in good shape and if you were coming from behind you had your work cut out for you.
All in all we had a decent weekend and a good time. I also got a chance to meet up with a few of the great guys from Bell Helmets who came out to check out the race and support Flat Track.  Most importantly I stayed healthy for Springfield, which at a race like this the crazy accidents usually happen.
I can't thank my sponsors, family, friends and fans enough for everything.  Thanks again to everyone!
Chad Cose 49

To become a partner or follow the progress of C.R.C Racing and Chad Cose you can find news, updates and race results on the sources below.
"I would also like to thank all the great people on board C.R.C Racing for the 2012 season".
ChadCose.com
Follow Chad Cose on Twitter