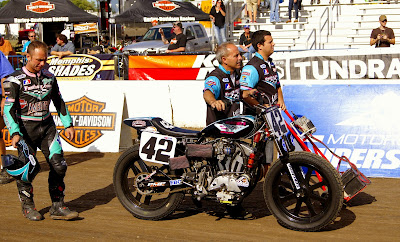 Bryan Smith and his #42 Moroney's Fasthog.com/American H-D/Rockysonline.com/Boughner Racing-sponsored team get ready to be introduced to the crowd during rider intros at round 16 of the 2011 AMA Pro Flat Track Harley-Davidson Insurance Grand National Championship presented by Motorcycle-Superstore.com season at the Springfield Mile II on September 4.  Bryan's father, Barry, rolls the Flint, MI. resident's XR750 up just prior to the running of the National main event.

Flyin' Bryan finished 9th in the 2011 season-ending standings, but likely would have finished much higher if not for bad breaks at both Springfield Mile events, and some DNQs suffered earlier in the season.  The veteran campaigner of The Rolling Thunder Show looks to be working on turning things around for the 2012 season, and should definitely improve on his 2011 season, where his only win came on one of his Moroney's Fasthog.com XRs at the Sacramento Mile in late July.

As was announced late yesterday, Smith will be campaigning Indianapolis resident Ricky Howerton-built Kawasaki 650R-based Twins machine for the five mile events of the 2012 AMA Pro Flat Track Harley-Davidson Insurance Grand National Championship presented by Motorcycle-Superstore.com season.  This new pairing in the sport will utilize the same set-up that Eaken Racing and Australian-rider Luke Gough campaigned in the 2011 season, and built by one of the best fabricators in the business, with tuning done by one of the master wrenches in the business, former Team Honda main man and championship-winning tuner, Skip Eaken.

With both Springfield rounds, the Lucas Oil Indy Mile, Sacramento and Santa Rosa, the 2012 season-scheduled rounds make up nearly 1/3 of the calendar's 17 events.  And with Bryan's history on the mile tracks, this pairing should be golden for all those involved. 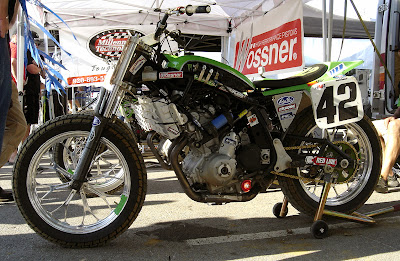 Bryan Smith took this #42 Werner-Springsteen Monster Energy Kawasaki/Wossner Pistons/SuperTrapp-backed 650R-based parallel twin to back-to-back wins at the Lucas Oil Indy Mile and the Springfield Mile II within eight days of one another in late August/early September 2010.  Smith also gained Kawasaki their first-ever Twins Series National main event win in AMA Pro Flat Track Grand National Championship Series racing.  Several hours after this shot was taken, Smith and the Werner-Springsteen pairing were standing on top of the box at one of the premier races on the schedule, the Lucas Oil Indy Mile.

After working the bugs out of the Kawasaki during the first part of the season and coming together as a team, by late summer at Indy the green meanie was singing at high-roar and Flyin' Bryan and the Werner-Springsteen team were on top of the world.  At a full house at Indy over the Red Bull Indianapolis MotoGP weekend, Smith held off 7-Time AMA Grand National Champion Chris Carr after 25 laps of fast and furious action to take the win by .140 seconds at the stripe.  And just eight days later he again did it to The Prince of Peoria at the Springfield Mile II, eaking out the win by a scant .048 seconds.

The '11 season saw the team together again at the season-opening rounds at Daytona, but within weeks Smith and the Werner-Springsteen team had parted ways, and Bryan was running his own XR750-based Twins Series team along with his father, Barry.

Read the press release below to find out how the Smith-Howerton pairing came together and what got Flyin' Bryan Smith to get back on a Kawasaki again for the five mile events for the 2012 season! 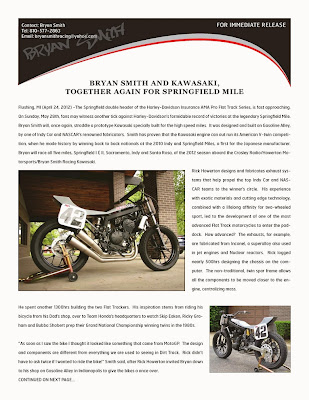 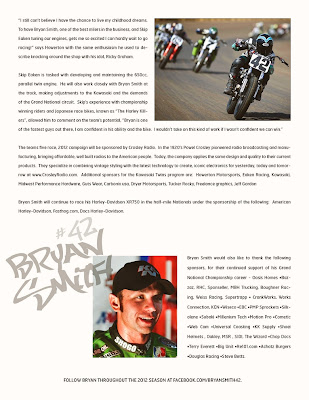 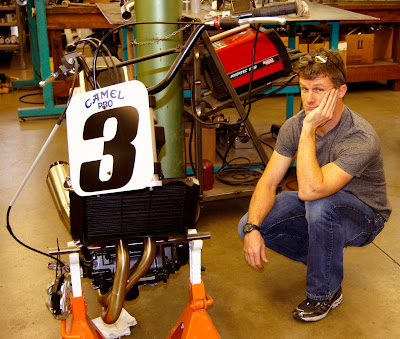 Rick Howerton, builder of the Howerton Kawasaki that was campaigned by Skip Eaken and Luke Gough in the 2011 AMA Pro Flat Track Harley-Davidson Insurance Grand National Championship presented by Motorcycle-Superstore.com season, kneels next to his project street-tracker version of the Kawasaki 650R-based Twins Series machine, at his Howerton Racing Products shop off of Gasoline Alley on the west side of Indianapolis in December '11.

A long-time fan of AMA Grand National Championship Series racing, close to 1800 hours went into the machine from the time it started as a dream to the time it actually hit the dirt running at the Springfield Mile I round in 2011.  With proven-winner Bryan Smith behind the controls for the upcoming mile events in the 2012 season, these guys could very well be working their way to the top of the box in the year ahead!
﻿

You can read about our story on Rick Howerton's Kawasaki Twins Series build here, that we did in December 2011, and get an inside view on the man, the machine, and the love of the sport.