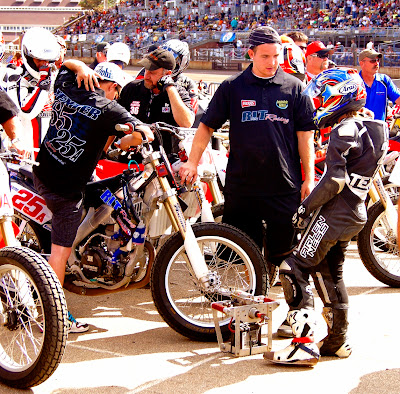 Getting ready to do battle in the AMA Pro Motorcycle-Superstore.com Pro Singles Championship Series main event, Shayna Texter and her RLT Racing team are ready to head out to the track for rider intros prior to the 12-lap main event for the 450-based series.  The dimunitive Pennsylvania resident took her #25A RLT Racing/Lancaster H-D/Herr's/Invisible Glass-sponsored Honda CRF450R to a great finish in 4th-place after a rousing bar-to-bar duel with the lead pack, including event-winner Jake Shoemaker, runner-up Zakk Palmer and 3rd-place finisher Briar Bauman.  All were Honda-mounted, with the top 3 finishing within .010 seconds of one another, with Shayna slight 0.16 behind Bauman.

But perhaps what would lie in the future was even more paramount to what this fine young lady is truly capable of.  Six days later at the Knoxville Raceway in the heartland of Iowa, Shayna made history by becoming the first female to win an AMA Pro Flat Track National main event, when she took her RLT Racing Honda to the top of the box over rivals Bauman and Michael Toon (the Springfield Mile II winner in 2010) in round 17 of the 2011 AMA Pro Motorcycle-Superstore.com Pro Singles main.  In what had been a long-time coming, she had finally stood atop the box, and finished the season in a very solid 8th-place in the overall standings.

Shayna and RLT Racing made the announcement official yesterday that she will be DFW Honda-mounted for the 2012 Pro Singles Championship.  After finishing 11th and 12th in rounds 1 & 2 at the Daytona Short Track season-openers, Ms. Texter will next take to the track at rounds 3 & 4 of the 2012 AMA Pro Flat Track Harley-Davidson Insurance Grand National Championship presented by Motorcycle-Superstore.com season at the Springfield TT and Springfield Mile I on May 26-27.  Keep an eye out for her, because she'll be coming by you like a blur!

You can read the full press release below thanks to Cory & Shayna Texter and RLT Racing!

The relationship started right before Daytona where Shayna hopped on the DFW Honda 450 and put the bike in both of the main events with 11th and 12th place finishes.  Daytona, a track where Texter usually struggles, marked a strong start to the series and the whole team was really happy with the results.

Mark Lamb, owner of DFW Honda, had this to say. "We are very excited to be helping Shayna out this season. She comes from a good family and takes her racing very serious.  She is a proven winner and she was the perfect choice for this season. I am really looking forward to a fun season."

DFW Honda is run by the Lamb Family and has dealerships based out of Dallas and Fort Worth, Texas.  DFW Honda has been a supporter of 7x Grand National Champion Chris Carr the last couple seasons until his retirement last season.

Shayna is very humbled to be flying the DFW Honda flag after a rider of Chris's caliber.  "I can't thank the whole Lamb family enough for their support.  I was so nervous about getting a deal together this late in the season, but DFW Honda has stepped up and they are giving me full support.  Coming from a family business myself, I know how hard the Lamb family works and I look forward to a full season of hard work and success."

Shayna will also receive full support from RLT Racing, the team her and her brother started in 2010, as well as a bunch of great companies that currently support the team.  Shayna currently sits 15th in points after the two rounds in Daytona.  She is 9 points out of 2nd place and is training hard to put DFW Honda on top of the box through-out the season.

Keep up with Shayna on Twitter at Twitter.com/ShaynaTexter and also on the RLT Racing page on Facebook.