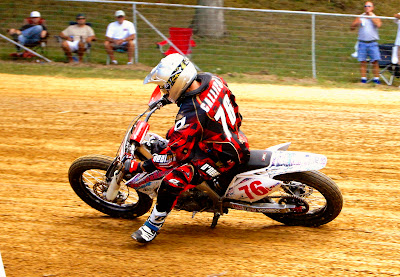 Gerit Callies rolls it on coming out of turn 5 at the Peoria TT on his #76L Twenty Six Suspension/G2 Ergonomics/Vortex Sprockets/O'Neal-sponsored Honda CRF450R during practice for round 14 of the 2011 AMA Pro Flat Track Harley-Davidson Insurance Grand National Championship presented by Motorcycle-Superstore.com season on August 21.  Callies would go on to qualify 2nd on the day at the amphitheatre-setting track in the AMA Pro Motorcycle-Superstore.com Pro Singles Championship round, and would end the day in the same spot-2nd place-in the Pro Singles main event behind 'declared' winner Mikey Avila.

The South Dakota resident ended the 2011 season ranked as the 3rd rider in the Pro Singles Championship, behind '11 Champ Mikey Martin and runner-up Mikey Avilia.  Callies won three rounds on the season (Daytona II, DuQuoin and Castle Rock) and if not for missing both Springfield Mile rounds would have finished much higher in the year-ending points.  If you consider each round pays 23 points to win, and Callies finished 25 points behind Martin and 17 behind Avilia, he very well could have been the one carrying away the #1 plate at the end of last season.  Both Martin and Avilia ran and finished in all 20 events last season.

Callies started the season out right where he left off, however, after winning round 1 and missing the field in round 2, he currently sits 3rd in the 2012 AMA Pro Motorcycle-Superstore.com Pro Singles Championship with 24 points, tied with Weirbach Racing's new young sensation Ryan Wells (who won round 2 after not qualifying for round 1) and just 11 points behind early-season leader Hayden Gillim.

This could be Callies year after finishing so strong last season, but as always the cream is thick in the Pro Singles Championship Series with a handful of great young riders working their way up the ranks.  With Wells, Gillim and Callies starting the season out in the top 3, there is no reason to think that these same three men won't be fighting it out throughout the year right down to the last round at Pomona in October.  Stay tuned!

Thanks to Today's Cycle Coverage.com's Dan Jacobson, Sr. for this review of round 1 of the 2012 AMA Pro Flat Track Motorcycle-Superstore.com Pro Singles season at the Daytona Short Track.

Also featured in this review are some great shots of the action at the Daytona season-opener taken by the superb couple of Brent and Stephanie Pierce of BTP Photography out of the Lima, OH. area.  Even if you don't recognize Brent's name, you've probably seen a lot of his great work in the Lima Half-Mile programs for the last few years, as well as in some of the event flyers that the IMDA mails out each year for the Springfield Mile, TT and Short Track rounds.  Next time you check those out, look for Brent and his lovely wife Stephanie in the photo credits!