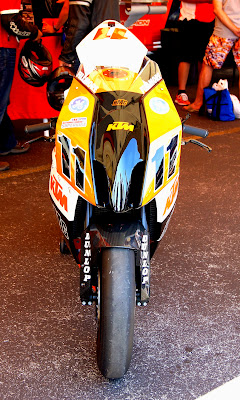 Chris Fillmore's #11 HMC/KTM 1190 RC8 R AMA Superbike sits on display under the KTM awning at the Indianapolis Motor Speedway during the 4th Annual Red Bull Indianapolis MotoGP round in August 2011.  Fillmore and the Mitch Hansen-led team had earlier in the season made their debut at the Mid Ohio Sports Car Course round in July,  with the eventual '11 AMA Pro Vance & Hines XR1200 Series Champion carding 7th/9th-place finishes in the team's debut.  But the team only ran the New Jersey round with Fillmore suffering an injury that kept him off the bike for the better part of the weekend at the season-finale round.

However, the Wisconsin-based HMC squad got some great news over the winter break when KTM agreed to give the team some formal backing, allowing them to contest the complete schedule for the 2012 AMA Superbike Championship season.  The team also brought in former 2-Time IDM Superbike Champion and former IDM Superstock Champion Stefan Nebel to ride the team's second bike at the Homestead-Miami Speedway tests in March, and have since signed him as a team mate to Chris Fillmore for some select events for the 2012 season.

Starting off in Daytona, the KTM team got off to a slow start, with finishes of 11th/14th for Fillmore at the season-opening rounds.  Heading on to Homestead for the two-day tests, Nebel was able to get the bike within just over 1.7 seconds of fast-man Ben Bostrom with the 12th overall spot, and Fillmore ended the test ranked 14th just over 2.1 seconds behind BBoz.

You can check out the HMC/KTM AMA Superbike team announcement from the team's test at Homestead-Miami Speedway here via their official release video on YouTube: