The riders first went out on slicks but soon after it began to rain, making the track slippery and holding back ultimate lap times. The competitors just about managed to get back to the pits in reasonable conditions and then just a few riders ventured out at the end in the wet. 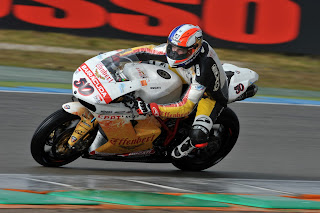 Sylvain Guintoli is shown on the Ducati Effenbert Liberty Racing mount during the first day of qualifying for round 3 of the SBK World Championship at Assen, on Friday April 20.  Guintoli topped the charts in the rain-deluged first day at The Netherlands event.  Press release photo courtesy of SBK.


Jonathan Rea (Honda World Superbike Team) was fifth ahead of Michel Fabrizio (BMW Motorrad Italia GoldBet), the first BMW runner in the timesheets. Even in these difficult weather conditions, five different manufacturers are in the top six positions.


Two more BMWs were next up, Marco Melandri (BMW Motorrad) in eighth ahead of Ayrton Badovini with the Italian team’s S1000RR. Melandri had been fastest in the first practice session in the morning, run in dry conditions. 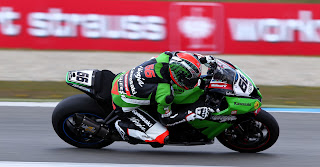 Tom Sykes continues to impress on the Kawasaki Racing Team ZX-10R as he finished the first day at Assen in the second spot on the leaderboard.  Press release photo courtesy of SBK.


With the top 16 positions likely to stay the same should it rain in tomorrow morning’s final session, the first rider to be excluded will be Max Biaggi (Aprilia Racing). The Italian has to hope for an improvement in the weather otherwise he will be forced to start from the fifth row of the grid. 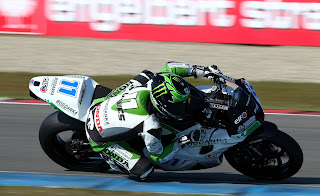 Sam Lowes put his Bogdanka PTR Honda CBR600RR on top of the leaderboard after the first day's qualifying round at Assen, round 3 of the 2012 SBK World Championship, on Friday April 20.  Press release photo courtesy of SBK.


The BMW Italia team powered to the top of Superstock 1000 qualifying today as round 1 winner Sylvain Barrier went quickest with a time of 1 minute 39.580 seconds, half a second slower than his own circuit best lap set last year. Barrier was three-tenths faster than Australian Bryan Staring, the surprise of the day on a Team Pedercini Kawasaki. Third quickest was Barrier's Italian team-mate Lorenzo Baroni.


The provisional front row is completed by Eddi La Marra with a Barni Racing Team Italia Ducati 1199 Panigale, which made its Superstock 1000 debut at Imola. Frenchman Loris Baz (Kawasaki MRS) continued his good form with fifth quickest time today to follow on from his Imola runner-up slot.


The 20 year-old from Lausanne surprisingly managed to edge out his team-mate and one of the favourites, Michael van den Mark, third quickest and three-tenths from the top. In between the two Ten Kate riders was Belgian Gauthier Duwelz (Yamaha MTM Racing).


Opening round winner Riccardo Russo had a tough start to the weekend, the Italian only going eighth quickest. The promising young Australian Corey Snowsill (Yamaha MTM Racing) had a crash but came away with just a few bruises.


The opening qualifying session for the first round of the KTM European Junior Cup saw Frenchman Jean-Francois Demoulin take the top slot, ahead of Adrian Pasek from Poland. His fellow Bogdanka team member Artur Wielebski was third. 20 riders are taking part in this weekend’s event, all on identical KTM Duke 650 machines.