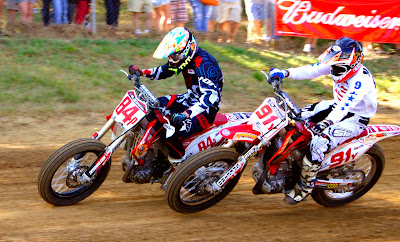 Mikey Martin on the #91Y Weirbach Racing/General Engineering/Barnett Clutches/Spectro-sponsored Honda CRF450R tries to get an inside run for the 4th-place spot in his battle with Andrew Smith on the #84P TNT Harley-Davidson/Parts Unlimited-backed Honda during round 14 of the 2011 AMA Pro Flat Track Harley-Davidson Insurance Grand National Championship presented by Motorcycle-Superstore.com season at the Peoria TT on August 21, 2011.

Smith got the nod over Martin, but Martin won the war at the end of the season and clinched the championship for the 2011 AMA Pro Motorcycle-Superstore.com Pro Singles Series for himself and the Iowa-based Weirbach Racing team.  Smith finished 25th in the season-ending standings running a partial schedule and qualified for five of the 20 rounds, with Martin qualifying for all 20 and winning three-in-a-row (Hagerstown, Lake Odessa, Sacramento) for his and the team's stellar season.

Of note, on-track the duo actually finished 5-6, however after apparent-winner Briar Bauman was disqualified for a fuel-test failure issue after the podium ceremonies, the win was awarded to season-ending runner-up Mikey Avila, and the rest of the field moved up.

Martin got off to a rough start in the 2012 AMA Pro Flat Track Harley-Davidson Insurance Grand National Championship presented by Motorcycle-Superstore.com season at the Daytona Short Track rounds 1 & 2 three weeks ago, and failed to qualify for either round in what would have been his full-time debut as a rookie in the Expert class.  Not for want of trying, Martin qualifed in the top-48 both nights to make the heat race cut-off, but had a tough time of trying to race out of his heats or semis to make the National mains. 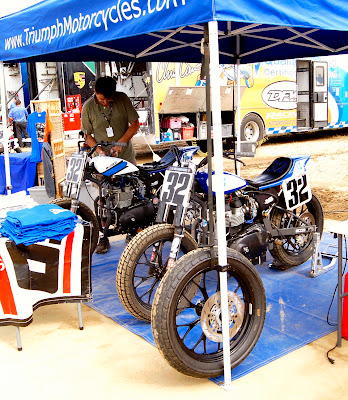 For the 2012 AMA Pro Flat Track Harley-Davidson Insurance Grand National Championship presented by Motorcycle-Superstore.com season, Martin will be riding the British mounts in the 11 Twins Series events, with backing from the Triumph factory to help out the hard-working Bonneville Performance guys.  The first Twins Series round is just over 50 days off at the Springfield Mile I, round 4 of the series on May 27.

What a long, strange trip it’s been…. 6540 miles over the course of 18 days.
We had been in preparation for this Daytona trip since the end of the last season.  I knew going into my rookie season as an expert that we had to prepare two Grand National quality bikes for the Singles program. I was previously on a team where they supplied race ready bikes and all I had to do was show up and meet the team at the track.   I had found myself having to completely build two bikes from the ground up all at in a short amount of time.
We worked on the bikes and my van until the minute I had to leave.  Once on the road I headed straight to Savannah, Georgia to Oglethorpe Speedway.  It was a long 44-hour drive.  The Bonneville Performance, Factory Triumph Race team met me two days prior the actual race event to test and tune on the Triumphs and to continue making the adjustments to help me feel comfortable on the bikes.  This was only my second time on the bikes.
Joe Kopp had been asked by Triumph if he would assist me with the bike set-up and coach me. It was an honor the have Joe in my corner.  I learned a lot. I want to take this opportunity to publicly thank Joe and can’t wait until the next time we have an opportunity to work together, which most likely will be at the Springfield Mile.
Joe and I also shot a promotional video for Triumph.  This was the first time I had ever done anything like that and I was nervous.  I was told that both of us had done a great job, I can’t wait to see it.  We had a film crew in our pits the whole time we were there, it added a whole new element to the experience.
The race got rained out and we had to stay an additional night in Savannah.  The next morning they tried to run a dual event where the originally scheduled event ran as scheduled and the Pro and Expert venue would run as soon as the amateur event was over.  That left us with a condensed program since the Oglethorpe Speedway has a strictly enforced curfew.
In the heat race I came off the line in about sixth and felt like at about lap three that the bike was really starting to hook up good as I was getting some heat in the tires, but with the laps being cut down to six laps due to the condensed program, I did not have enough time to make the final pass for the direct transfer spot to the main and was now going to the semi.  Lesson learned.  I will be using tire warmers in the future.
When the flag dropped for the semi I did not realize that I had started the bike in third gear, instead of taking off in second and up-shifting twice and running fourth gear, I started in third and up-shifted twice and ended up running fifth gear.  I had a great start and was in second place.   Once I realized that the mistake had been made, I had to slow the bike down to down shift.  When I down shifted I had lost three positions and found myself in fifth place.   I was on the move and ended up making a few passes but with the condensed program I was unable to make the final pass by two feet and missed the main event by the final transfer spot. This is a great track to learn on and the competition was that of a national.  I feel very confidant going into my next twins’ race that I can have some great results.
On the first day at the Daytona Short Track I had the honor of being introduced to the audience and on Speed TV in the opening ceremonies by the CEO, Greg Heichelbech of Triumph North America.  I also did a one-on-one interview with Speed TV.


Due to the luck of the draw I had in my opinion the worst possible qualifying positions in terms of the sessions that I was girded in.   On the first day of timed qualifying I was in the sixth session which was the last session, at Daytona that is usually a good thing since the track takes on rubber and the track keeps getting faster, but the AMA decided to reverse the order in the second qualifying session, which meant last in first out.  The first group came in and was able to relax and watch the track, put on tire warmers and change gearing but being in the last group we only had time to change our gearing and it was time to go back out.  After the second qualifying session I was almost 7/10ths of a second faster than my first session.  At that point I was fifth fastest overall, but there was five groups left and by the time the second session was over I was sitting in thirty-fourth position.  A second row start is not where you want to be at Daytona but I was in the program.
I had a second row start in the heat race.  Only the top four advance directly to the main.  I was doing great but at this level of competition you don’t move to the front very easily.  I ended up seventh.  This put me in the semi. Only three riders advance from the semi to the main.  I made a gearing change and got ready for the semi. I was on the second row and got a great start.  I was in about fifth coming out of turn two and found myself really fighting the bike and could not hold it down in the corners.  The bike felt like it wanted to go straight to the wall and I started loosing positions.  By the time the checkered flag was thrown I was in tenth place. I went to the pits and tried to figure out what made the bike handle so bad.
Once we got back to the pits and reflected on everything we decided to change out the rear shock and get ready for day two.
On the second day, I was hopeful that I would have better luck with my qualifying grid position but this time I was in the fifth group, so that meant that in the second qualifying session I would be the second group out with four groups behind me.  I knew I was just going to have to make the best of it.
I was once again on the second row for my heat race I ended up getting a seventh in the heat, which meant that I was again going to a semi.  At this point I was still confident that I would make the main event, so we went back to the pit and made some final adjustments and got ready from the semi. At the start of the race I came from the second row on the outside, coming out of turn one I was in about thirteenth and had ten laps to make ten passes to make the main.  I was making a pass about every lap. Coming down to the white flag lap I was in fourth and I needed the last pass to get the final transfer spot but it didn’t happen I tried to make the pass on the outside going into turn three, it was a drag race to the checkers but Mikey Rush got the drive and the final transfer spot to the main. 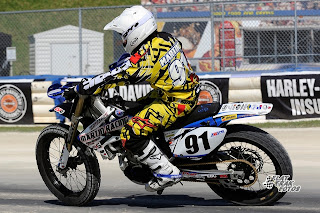 
My next National will be at Springfield, IL with a TT on May 26th and the Mile on May 27th.  Please drop by the pits and get an autograph sheet and say hi.
I can’t thank my sponsors enough. I have a lot of existing sponsors and some new ones.  I want to give a special thanks to Bill Gately, Mike Cougle and Steve Gately of Bonneville Performance.  I also want to thank Joe Kopp, and everyone at Triumph Motorcycles.