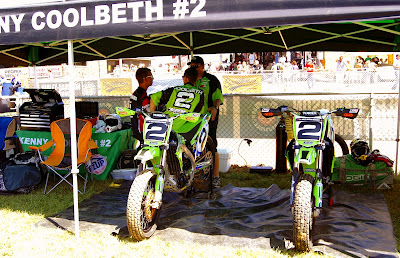 During the break in the on-track action before the start of the day's heat races at round 14 of the 2011 AMA Pro Flat Track Harley-Davidson Insurance Grand National Championship presented by Motorcycle-Superstore.com season, we saw Kenny Coolbeth, Jr. talking in his pit area with RIDE Academy owner and former AMA GNC competitor Mike Hacker at the Peoria TT on August 21, along with one of Kenny's team members, as his Chaplin Kawasakis set ready to go.

Coolbeth had just qualified 18th out of the 39 riders that timed-in for the day and was slated to start in heat one alongside eventual-event winner Henry Wiles, Fast Boy from Illinois Rob Pearson and Johnny Lewis.

After winning round 3 of the season back in April in only his third AMA GNC race on his new #2 Chaplin Kawasaki/Spectro Oils/Wiseco/Fox-backed KX450F at the DuQuoin Indoor Short Track, Coolbeth fought tooth and nail in not only his heat at Peoria-where he finished 4th behind Wiles, Pearson and Lewis-but in his run home to nab a 9th-place finish in the National main event at the annual trek to the oldest event on the AMA Pro Flat Track calendar.

With rounds 1 & 2 of the 2012 AMA Pro Flat Track Harley-Davidson Insurance Grand National Championship presented by Motorcycle-Superstore.com season in the books, the Connecticut resident has two, 4th-place finishes to his credit in the still-very young season, and sits firmly in the 5th spot of the overall point standings with 34 points, just 14 behind current series' leader and Daytona Short Track II winner Matt Weidman.

Rounds 3 & 4 of the season are still just over 40 days away, slated for Memorial Day weekend at the Springfield TT and Springfield Mile I on May 26-27 at the Illinois State Fairgrounds.

You can read about that here thanks to AMA Pro Flat Track:

And thanks again to AMA Pro Flat Track for this great rider spotlight on KC2: