AMA Pro Flat Track: Check out the Radio Interview with Bryan Smith & Barry Boone While You Preview the Run to Today's Sacramento Mile 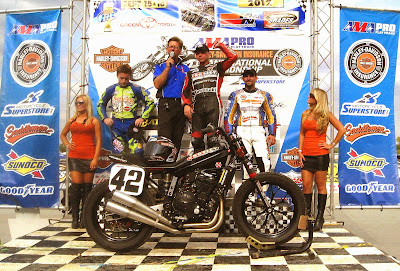 While you are gearing up and reading our preview of today's round 5 of the 2013 AMA Pro Flat Track presented by J&P Cycles Grand National Championship season at the Sacramento Mile, you can check out a great radio interview from last night featuring Crosley Radio/Howerton Motorsports rider Bryan Smith #42 and AMA Pro Flat Track official announcer Barry Boone.

Last night, Sacramento's 101.9 FM The Wolf DJ Jay Roberts interviewed the 2-Time and defending Sacramento Mile champion along with the golden voice of AMA Pro Flat Track, Barry Boone.  It was a really well-done interview and not at all schlocky like some racing interviews will come off to the hardcore fan or fans, so it is well worth the almost-11 minutes to listen in on what the duo had to say about The Rolling Thunder Show's return to Sacto.

In the shot above from round 13 of the 2012 AMA Pro Flat Track Grand National Championship season at the Springfield Mile II, winner Flyin' Bryan gets interviewed by Barry Boone on the podium after taking the win on the #42 Crosley Radio/Howerton Motorsports Kawasaki EX650 by just .041 seconds over Sammy Halbert #7 and by another .222 seconds over soon-to-be 2012 AMA Grand National Champion Jared Mees #9.  The event was run on September 16 after the original event scheduled over the Labor Day weekend was delayed due to a deluge of rain in the area over the Holiday weekend.

Check out the interview here while you get ready for this afternoon's great event at the Cal Expo Fairgrounds and while you are getting ready to check out the live PPV streaming video of today's races.