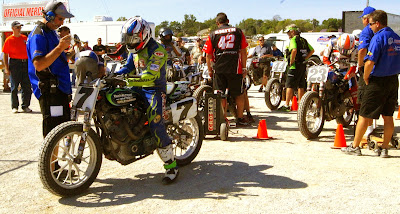 In just over 18 days, the stars of The Rolling Thunder Show will be taking the greatest racing series on two-wheels in the world to the legendary Indy Mile for round 8 of the 2013 AMA Pro Flat Track presented by J&P Cycles Grand National Championship season.

Since the 2008 season, the Indy Mile has held it's place alongside the Red Bull Indianapolis MotoGP Weekend (except the 2011 event which was canceled due to the rigging collapse weeks before at the Sugarland concert), and will again run in front of a European contingent in town for one of the biggest races held just down the street at the Indianapolis Motor Speedway.

There's still time to get your tickets to what will again be an epic night of battle on two-wheels as the men and women of AMA Pro Flat Track hit the track at speeds of over 125 mph and bring you some of the biggest racing thrills there are while drafting and passing on the long straightaways at the fairgrounds venue.

Sammy Halbert, the winner of the 2012 event on his #7 South East H-D-sponsored XR750, will be looking to repeat as the event champion while the rest of the of the competition looks to get a leg up on The Slammer.

In the shot above, Sammy Halbert on his #7 South East H-D XR750 makes a few minor adjustments prior to one of the qualifying sessions at the 2012 Indy Mile on August 18.  Also getting ready to head out for the timed session are Jared Mees on the #9 Rogers Racing XR (who placed second behind Sammy in the 2012 event), Bryan Smith on the #42 Howerton Motorsports Kawasaki (partially hidden by Howerton team member Jeff Gordon), Brandon Robinson on the #44 Werner-Springsteen Kawasaki (partially hidden by team owner Bill Werner, and 3rd-place finisher in 2012), and Jeffrey Carver, Jr. on the #23 Kiesow Racing XR750.

A big thanks to Leah Burdette with Family Events Promotions for the event info supplied below and the Indy Mile event poster, where you can get all of your ticket and schedule info heading up to the running of one of the greatest events of the year in the 2013 AMA Pro Flat Track presented by J&P Cycles Grand National Championship season at the Indy Mile. 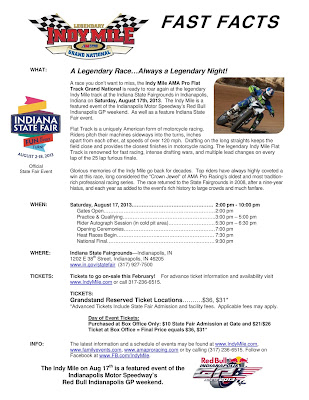 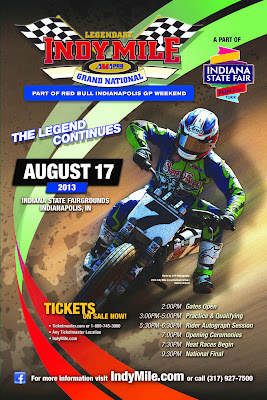