MONTEREY, Calif. (July 20, 2013) - AMA Pro Racing and Chet Burks Productions confirmed today that Sunday's GEICO Motorcycle AMA Pro Road Racing finals from Mazda Raceway Laguna Seca will be aired in a set of tape-delayed broadcasts on CBS Sports Network. The series is competing on the historic 2.238-mile circuit situated in the rolling hills above Monterey, Calif. as part of the Red Bull U.S. Grand Prix alongside the international stars of MotoGP.
Flag-to-flag coverage of the AMA Pro National Guard SuperBike and AMA Pro GoPro Daytona SportBike races scheduled for Sunday afternoon will be featured in one-hour broadcasts as part of the CBS Sports Spectacular. Television broadcast airdates and times will be released as soon as they are available.
"The racing that is set to take part this weekend at Mazda Raceway Laguna Seca will surely be some of the best we've seen this season," said David Atlas, Managing Board Member of AMA Pro Racing. "We're very happy that the fans that are unable to attend the event this weekend will be able to enjoy the spectacular racing action." 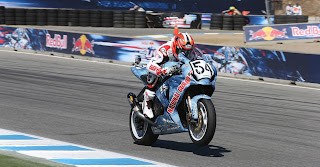