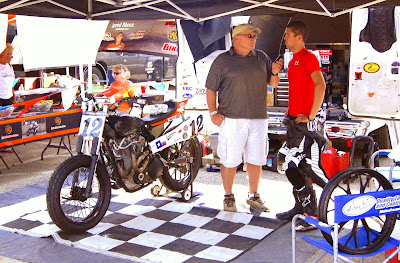 After bringing home a trio of 2nd-place finishes in the first three rounds of the season, the Washington State resident was virtually knocking on the door to make that extra step up on the podium, and Baker made a leap of it in his romp at Hagerstown on July 6 by winning his heat race, dominating the Dash for Cash and running away with the 25-lap National main and taking the win over first-time runner-up Jake Shoemaker by over 6.7 seconds.

And it's not like The Bullet didn't have this one coming, the writing was on the wall long ago but the ink just didn't want to dry for the popular rider.  Several times in his rookie year not only in the Singles Series, but while riding for the Lloyd Brothers Motorsports Ducati team in the Twins Series Baker had shown his hand, and even during his 2012 season which saw him race for no fewer then four different teams throughout the year, you knew it was coming and when it did, POW.

Overall, this is undoubtedly one of the most popular wins all around for the whole series and fans of The Rolling Thunder Show, as everyone involved has voiced their pleasure in one way or another in seeing this now and future star of the sport grab his first, of what will surely will be many!  And not too mention, he took over the overall points lead in the series with a 20-point gap over a three-way tie between early-season points leader Brandon Robinson, Henry Wiles and 2-Time AMA Grand National Champion Jake Johnson, with 10 races yet to roar in anger left in the season.

In the shot above, Baker can be seen talking with Cycle News and Rider Files.com's Larry Lawrence at round 5 of the 2012 AMA Pro Flat Track Grand National Championship season at the Lima Half-Mile on June 30.

For those that don't remember, Lima was the first race after Kenny Tolbert Racing mothballed his Kawasakis after planned sponsorship failed to materialize, and Brad was forced to scramble at the last minute to come up with the #12 Columbia Avionics/Mark Cheza/K&K Motorcycle Supply-sponsored XR750 shown resting in his pit area.

After qualifying the unfamiliar mount in an incredible 3rd-place out of the 43 riders that took a timed run, Baker rode to a 3rd-place finish in his heat, but was forced to settle for a very uncharacteristic 17th-place in the main later in the evening.

What a difference a year makes!

A big tip of the helmet and an especially raucous 'hoorah' for The Bullet, congrats man, you really worked for this and deserved it man!  BRAVO!

Check out Brad's great press release below to hear about all of the fireworks from Brad's trip to Maryland and his Independence Day Weekend celebration.


Hello Everyone, I hope you all had an amazing 4th of July weekend!!
First off, I want to apologize for not sending you a race report promptly after the month of June. I swear this year has been the worst year in my career of racing for cancellations due to rain!
The first weekend of June started off with just a small local short track right outside Indianapolis Indiana that I went to mainly to do some tire testing for my new tire sponsor, Mitas Tires, Developed and handled by Micah Racing Services. The weekend was a success while learning important information on the new tires and winning everything and having fun on the cool little short track called Mid-America Speedway.
The second weekend of June took me to Peoria, Illinois. The weekend started off at Spoon River Speedway on a sweet red clay banked half-mile. The night went pretty well, I won my heat which was an intense battle with JD Beach, got second in the Dash behind Jeffery Carver and ended up third in the main behind Jd Beach and the GNC Champ, Jared Mees.
The next night followed with a really fun short track in Pekin, Illinois. All day we were threatened by rain and it actually rained the majority of the morning. This actually helped the track out a lot, even though Mother Nature can ruin a lot of races she definitely is the best water truck!
The Program had to be rushed from the time it got started because there was a huge storm fast approaching. We got our open pro heats in and it wasn’t long after that they were calling us back up because it was starting to sprinkle and they really wanted to get the open pro main finished. I nailed the hole shot and led the majority of the race but national number 27 Rob Pearson was glued to my rear tire! With two laps to go he ran it hard into turn 1 and ran me way up the race track until we about ran out of room. I got right back on him but ran out of time to retaliate; it was a super fun race though. Following immediately after the race it started to downpour and continued to rain into the night.
This really threatened the Peoria TT that was supposed to start early the next morning. Unfortunately, when I woke up the next morning the pavement was still wet and I knew the chances of racing were slim. I wasn’t at the track for 10 minutes and it was already called, the track was just too wet! Fortunately, the race was rescheduled for this Sunday and they added a race at the Peoria Speedway on Friday night and a race in Macomb Illinois on Saturday night.
The following weekend I actually flew home for the first time in 2 ½ months to get some time on the completely remodeled Castle Rock TT that is holding a National on August 3rd. The track was 100 times more racy and fun compared to what is use to be. I ended up winning the 20 lap open pro main event and came in a close second in the short pro am race behind national number 80 Stevey Bonsey.
I'm feeling really confident for the race coming up in August, my plan is take away the Expert singles points lead that I should have had leaving Daytona! The last weekend of June was supposed to be round 4 of the AMA Pro Racing Grand National Championship held on the cushion lime stone half-mile in Lima, Ohio. It wasnt to our surprise when mother nature came back and dropped water on us pretty much all through Saturday and Sunday! This was a huge bummer because I hadn’t raced a national since early May and the promoter had no open dates to reschedule so he was forced to cancel the event completely. After that weekend, traveling to all these races to just get rained out was getting pretty old I tell you what!


Now this finally leads up to this last weekend in Hagerstown, Maryland.
The smooth, banked, red clay half mile was the new round 4 of the AMA Pro Racing Grand National Championship after the Lima cancelation. I alway love coming to Hagerstown because it is so close to our nation’s capital and not to mention I always seem to do well there. By the end of the night I would come to love the place even more!

Brad Baker takes the checkers after leading all 25 laps at the Hagerstown Half-Mile on the #12 Dodge Brothers Racing/Sefnco Communications/Specialty Fabrication-sponsored Harley-Davidson XR750.  The Bullet took his first career AMA Grand National Championship win at round 4 of the 2013 AMA Pro Flat Track presented by J&P Cycles Grand National Championship season.  Photo courtesy of Brad Baker by Dave Hoenig/Flat Trak Fotos.com.
The day started off decent in qualifying. I felt a lot better on the race track then my times showed but a 7th place in combined qualifying would give me a nice spot on the front row for the heat races! When the heats strolled around this is when my night really kicked off! I nailed the hole shot and put my head down! I felt like I was pretty fast and I couldn’t here anyone’s engine noise behind me. About halfway through the race the red lights came out when National Number 17, Henry Wiles, went down hard going into turn three! I finally took a look behind me and the nearest rider was a straight away behind me so I guess I was turning some good laps. The restart would mess me up for setting pole for the main event but that was alright. I nailed the restart again and stretched out another commanding lead and took home the win earning myself a spot in the Dash for Cash and a front row start in the main event.
The Dash went very similar to the heat race! I nailed the hole shot once again and in only 4 laps I won my 3rd dash for cash of my short career by almost a straightaway.
Last but not least is the GNC Main event. I guess I should of felt a little nervous walking out on the track since this was my best shot to win my very first GNC Expert National main event. I was the complete opposite though, I have been so comfortable on all my bikes lately and my team and I get along so well that there’s no reason to feel nervous.
I made the racing that night a little boring as I pretty much repeated what I did in the dash and heat race. The bike was working so good and I felt so comfortable that the win just came natural. I went by the checkered flags with a 7 second lead and a first time GNC Expert Winner! To add to the win I took over the overall GNC points lead and I now sit 20 points out front even after getting one of my second place finishes taken away from me in Daytona. 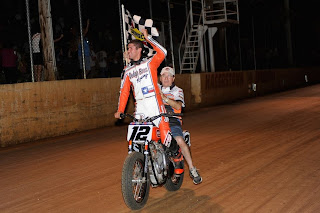 2011 AMA Pro Flat Track Saddlemen Rookie of the Year Brad Baker #12 takes the victory lap after taking his first Expert-ranked win at the Hagerstown Half-Mile on Saturday, July 6.  Photo courtesy of Brad Baker by Dave Hoenig/Flat Trak Fotos.com.
I can’t explain how it felt, I have dedicated my whole life to racing motorcycles and it feels amazing to accomplish another one of my goals! I’m more excited than ever for the next National that will be held in my home state at Grays Harbor Speedway in Elma, Washington. 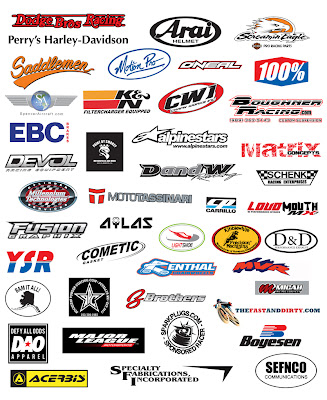