Mid-America Speedway on Indianapolis' southeast side has finalized all the details for this year's 'Night Before the Indy Mile' short track event, to be held on Friday, August 17, 2013.

A yearly extravaganza of short track racing held at the Marion County Fairgrounds, the short track event has become a must-see event for fans and a must-attend event for the racers in town for the night that precedes the Indy Mile at the Indiana State Fairgrounds.

And in the Open Pro Class, Jared Mees again took it to the competition and kept his perfect record intact at Mid-America by holding off the likes of other AMA Pro Flat Track regulars JD Beach, Henry Wiles, Sammy Halbert and Rob Pearson, just to name a few.

This year's event will feature not only the Open Class event--DTX-prepped machines against open class framers for a winner's share of $1500 of the purse, but will also see the return to the track of past AMA Pro Flat Track heroes and legends such as 3-Time AMA Grand National Champion Jay Springsteen, David 'Bones' Aldana, Steve Morehead and 2000 AMA Grand National Champion Joe Kopp, among others, competing in the Bultaco Astro Cup on machines made famous in the heyday of flat track in the '60s and '70s.

In the shot above, Mees runs away with the Open Class event at last year's Night Before the Indy Mile at Mid-America on his #9 Montgomeryville Cycle Center Honda 450 framer, followed by  Henry Wiles on his #17 Don's Kawasaki KX450F, JD Beach on the #95 USC Racing Kawasaki, and Slammin' Sammy Halbert on his #7 Fredericktown Yamaha YZ450F.

Check out the full press release following to see when you need to be there, as for $10/ticket you can't go wrong for the action that will be hot and heavy all night long at Mid-America Speedway, the place in Indy that knows how to put the racing on the track for your enjoyment and excitement!


Mid-America Speedway – Indianapolis, IN. – July 29, 2013 – In what has become a big weekend of stellar racing, Mid-America Speedway on Indianapolis' southeast side will again be featuring our 'Night Before the Indy Mile' short track event that this year will feature the stars of AMA Pro Flat Track, but will also be hosting round 10 of the 2013 AMA Vintage Dirt Track National Championship Series on Friday, August 16 during the Red Bull Indianapolis MotoGP Weekend.

Jeff Stevens and Harley-Davidson of Bloomington, IN. are the presenting sponsors for Mid-America Speedway's 'Night Before the Indy Mile' event for 2013. 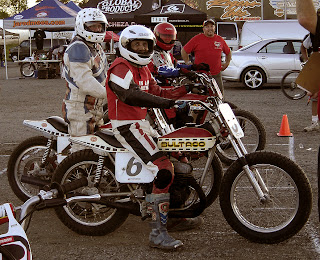 'Wild Will' Kelley is shown on one of St. Louis resident Art 'The Dart' Randall's Bultaco Astro mounts at Gas City Speedway in June 2010. Kelley, a 6-Time VDTRA #1 plate holder, will be making the trip from his Texas home to contest the Bultaco Astro Cup at Mid-America Speedway, as will be Randall and his fleet of pristine vintage Bultacos. Photo by Mike 'Stu' Stuhler/Stu's Shots.

Other riders that are currently making a name for themselves in AMA Pro Flat Track's Grand National Championship Series will be on-hand to test the wide-open circuit at the Marion County Fairgrounds facility for the Open Class event.
Current overall point standings leader Brad 'The Bullet' Baker, Slammin' Sammy Halbert, 2012 AMA Grand National Champion Jared Mees (who has never lost a race at Mid-America in several years of competing at the track), Rob 'Bugs' Pearson and a host of others are expected to race in this event on the evening preceding round 8 of the 2013 AMA Pro Flat Track presented by J&P Cycles Grand National Championship season at the Indiana State Fairgrounds. 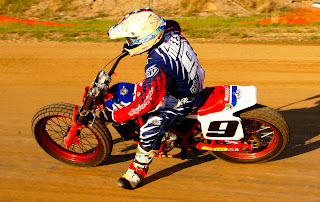 These riders will not only be competing on 450cc-class DTX-spec machinery, but alongside with some who will be rolling out their framer mounts, just like Mees did to win the 2012 Open Class event. The winner of the Open Class event will take home $1500 of the share of the purse.


The evening's racing will also see a special auction to benefit the Aid to Injured Riders Foundation (AIR), that will see autographed pro number plates available for bidding from each of the riders entered in the Bultaco Astro Cup. All proceeds from this auction will go to the AIR Fund to help offset injury costs incurred during professional competition and the number plates will be provided by Mr. Sign out of Yonkers, NY. 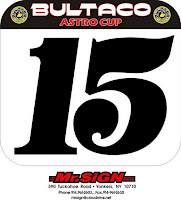 Mr. Sign of Yonkers, NY., will be supplying the riders in the Bultaco Astro Cup event with pro number plates, one of each which will be auctioned off during the evening to benefit the Aid to Injured Riders (AIR) Fund.

Tickets are only $10/each for adults, with children aged 5-9 only $5/each, and children 4 and under admitted free with a paying adult. Pit passes will be available for $10/each up until 4:00 PM EDT on the day of the show, and $25/each after that time.


The other classes being contested during the evening of 'The Night Before the Indy Mile' event will be a 500cc Speedway class, an 80-200cc youth 2-or 4-stroke class, a 250cc Money class, and an Open Quad class which is already filled with six riders. Mid-America normally offers a bevy of classes throughout it's normal season schedule but is cutting back at this event to make the racing flow better and more fluidly throughout the evening for the racers and the fans alike.


Practice starts at 4:30 PM EDT and the first heat race will roll off the line at 7:00 PM EDT, and we hope to see you there for what will surely be another great evening of racing at Mid-America Speedway at the Marion County Fairgrounds on Indy's southeast side!