DAYTONA BEACH, Fla. (July 11, 2013) -- Out of all of the GEICO Motorcycle AMA Pro Road Racing classes, AMA Pro Motorcycle-Superstore.com SuperSport has seen the most diverse group of riders up front so far this season. At Barber Motorsports Park, class rookie Joe Roberts showed up for his first professional event and won both races, at Road America Corey Alexander pulled a surprise double and with Stefano Mesa and Tomas Puerta winning at Daytona, that makes four different victors in the first three rounds. Based on the racing seen so far, any number of talented riders could claim victory at the Buckeye SuperBike Weekend presented by Dunlop Tire set to take place this weekend, July 12-14, 2013, at Mid-Ohio Sports Car Course. 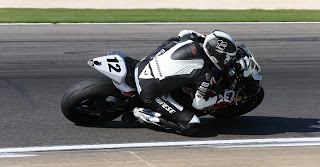 Tomas Puerta on the #12 RoadRace Factory Yamaha YZF-R6 heads to round 4 of the AMA Pro Motorcycle-Superstore.com SuperSport Series at Mid-Ohio with a 13-point lead over title rival Stefano Mesa.  Puerta took home finishes of 2nd and 3rd-place at the Barber Motorsports Park round several weeks ago (shown).  AMA Pro Road Racing photo by Brian J. Nelson.
As a Motorcycle-Superstore.com SuperSport East Divisional round, the focus will be on the tight points race. Mesa (No. 37 Motosport.com RSRacecraft Yamaha YZF-R6) currently leads Alexander by just two points heading into the 2.4-mile circuit's doubleheader, so the lead as the East racers begin the second half of their season is precarious.  Mesa had a tough round in Alabama. Feeling ill, the Colombian found himself gridded up much lower than normal - on the third row in ninth place - following a disappointing qualifying effort. Mesa rallied to earn two eighth-place finishes to avert disaster and maintain the points lead.  No doubt Mesa will look to return to the podium this weekend. Last year, he earned third and fourth in Ohio, so the young star has performed well at the twisty circuit before. He'll be looking to do better than that, however, and return to the top step of the box for the first time since Daytona.  Alexander (No. 5 National Guard Celtic Racing Suzuki GSX-R600) might be right on Mesa's tail but he's looking to overtake his fellow competitor this time around. Alexander closed a few points on Mesa in Alabama, but his two sixth-place finishes weren't quite the weekend he'd hoped for going in. Following a crash in practice, he wasn't exhibiting the form he showed in Wisconsin. But Alexander has made large strides in 2013 and can be the first Motorcycle-Superstore.com SuperSport racer to earn three victories in 2013 if he can get back on top in Ohio.
The third place rider in the Motorcycle-Superstore.com SuperSport East Division, Hayden Gillim (No. 69 Team 95 Yamaha YZF-R6), made big strides in Alabama. Gillim's fourth- and second-place results at Barber were highlighted by a photo finish podium where he nudged out former teammate Puerta for second place on Sunday. Gillim, known for his hot streaks, led both races and was able to hang on to eventual winner Roberts for a few laps, which bodes well since Roberts isn't racing at the Mid-Ohio event.  West points leader Puerta (No. 12 Roadrace Factory Yamaha YZF-R6) has nothing to gain in the standings this weekend but will go for victory in Ohio. Puerta's second- and third-place finishes in Alabama continued his streak of being in the top five in every 2013 SuperSport race, highlighted by one victory. The Motorcycle-Superstore.com SuperSport veteran's season has been one that we've come to expect from the Colombian, keeping mistakes to a minimum and concentrating on the points haul.  Newcomer Nick McFadden (No. 118 TOBC Racing Suzuki GSX-R600) impressed in his AMA Pro debut in Alabama. McFadden, from the racing hotbed of Owensboro, Ky., has been climbing the amateur racing ranks for years and celebrated his 16th birthday by qualifying on the front row and earning a podium in his first professional event. On Sunday, he was quick again but crashed out. McFadden certainly looks as if he won't need much time to get up to speed in the class.
Miles Thornton (No. 72 CTR Racing Yamaha YZF-R6) also performed well at the last round, joining McFadden on the front row and then backing it up with two top fives. It was the best race yet for Thornton in 2013 and it allowed him to leapfrog Travis Wyman for fourth place in the East standings by a single point.  Like Puerta, the West's second-place points man David Sadowski, Jr., (No. 101 Mach Modified Yamaha YZF-R6) won't make any movement in the point standings in Ohio but the second-generation pilot will look to regain the form that saw him earn the podium at Daytona.  Another young rider who made his debut in Alabama was 16-year old Kaleb De Keyrel (No. 51 CWS Bleakly-Hayes Yamaha YZF-R6). Keyrel is another GEICO Motorcycle AMA Pro Road Racing hotshot just joining up after meeting the age requirements and took 10th on Sunday in Alabama.
TV Broadcast Schedule
This weekend's GEICO Motorcycle AMA Pro Road Racing action will be broadcast on CBS Sports Network as part of the CBS Sports Spectacular. The coverage will begin Saturday, July 13 at 1:30 p.m. ET/ 10:30 a.m. PT with the weekend Preview Show, followed by AMA Pro GoPro Daytona SportBike Race 1 at 2:00 p.m. ET/ 11:00 a.m PT and then LIVE coverage of AMA Pro National Guard SuperBike Race 1 at 3:00 p.m. ET/ 12:00 noon PT. Televised coverage of the event will pick back up on Sunday, July 14 at 2:00 p.m. ET/ 11:00 a.m. PT with GoPro Daytona SportBike Race 2 and will conclude with a LIVE broadcast of National Guard SuperBike Race 2 at 3:00 p.m. ET/ 12:00 noon PT. Fans can find CBS Sports Network on their TV by using the channel finder at http://www.cbssportsnetwork.com/channel-finder.
Live Streaming Schedule
In addition to the live broadcasts on CBS Sports Network, AMA Pro Live will be live streaming multiple channels of behind-the-scenes video of the weekend's activities alongside Live Timing & Scoring. AMA Pro Live puts fans in the director's chair, allowing them to choose from a variety of viewpoints including track cameras, paddock cameras and a press conference channel. Streaming will begin with coverage of the weekend's practice and qualifying sessions on Friday, July 12 at 11:00 a.m. ET/8:00 a.m. PT at http://www.amaprolive.com. High Definition streaming of National Guard SuperBike Final Qualifying will begin on Saturday, July 13 at 9:40 a.m. ET/6:40 a.m. PT.
Fans will also be able to view high-definition broadcasts of both Motorcycle-Superstore.com SuperSport races LIVE on AMA Pro Racing's streaming portal thanks to support from Gearzy. Race 1 is scheduled for Saturday, July 13 at 2:15 p.m. ET/11:15 a.m. PT followed by Race 2 on Sunday, July 14 at 10:15 a.m. ET/7:15 a.m. PT. Logon and tune in at http://www.amaprolive.com.
Social Media Channels

Tickets for this weekend's Buckeye SuperBike Weekend presented by Dunlop Tire start at just $30 and are available for purchase on the Mid-Ohio Sports Car Course website at http://www.midohio.com/Schedule/Buckeye-Superbike-Weekend-2013.