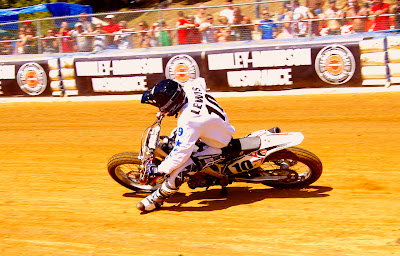 Round 1 of the 2012 AMA Pro Flat Track Harley-Davidson Insurance Grand National Championship presented by Motorcycle-Superstore.com season at the Daytona Short Track I is in the record books, and Johnny Lewis on the #10 Scott Powersports/Dubach Racing Developments/Saddlemen/Triple J Racing-sponsored Honda CRF450R was the man of the day spraying the champagne from the top step of the podium after leading all 25 laps of the 19-rider National main event.  Matt Weidman on his #20 SNIP-sponsored Honda followed JL10 home in 2nd place, tying his series and career-best finish in an AMA Grand National Championship race (2nd at Lima 2011) and his first-ever podium in a Singles Series event, with last year's double winner and this year's fast qualifier and Dash winner Sammy Halbert coming home in 3rd after trying to run down the front-running duo in the closing laps on his #7 Fredericktown Yamaha YZ450F.

As in the shot above from round 14 of the 2011 AMA Pro Flat Track Harley-Davidson Insurance Grand National Championship presented by Motorcycle-Superstore.com season at the Peoria TT on August 21, Lewis powered his #10 Scott Powersports Honda to the front right off the start of the National main at Daytona and never looked back, breaking his cherry in the series at the start of his third full season of campaigning The Rolling Thunder Show.  As was announced in his press release earlier in the week, JL10 dedicated his win to his late friend and tuner, Mark Adams, who was tragically killed in an accident earlier this year.

3-Time AMA Grand National Twins Champion and '07 Singles Series Champ Kenny Coolbeth, Jr. took his #2 Chaplin Kawasaki home in 4th, with 2011 Rookie of the Year Brad Baker taking the #12 Werner-Springsteen/Kenny Tolbert-tuned Kawasaki into the 5th spot after having to race and win his semi and starting off of the back row of the National.  Other notables for the evening saw former Pro Singles runner-up Mikey Avila #33 finish 17th in his rookie Expert debut, with last year's sensation Briar Bauman riding the #10Z USC Kawasaki into an 8th place finish in his rookie Expert debut.

Defending 2-Time AMA Grand National Champion Jake Johnson had an off-night on the #1 Zanotti Racing Honda, finishing in 12th, and 2-Time Singles Series Champ Henry Wiles ending the night in the 18th spot after taking a provisional to make the main after a hard fall earlier in a semi race.

A big congratulations goes out to Johnny Lewis for his first-ever AMA Grand National Championship win, and for the rest of the riders who made the trip to Daytona, let alone made the main.!

Check out this video with Johnny Lewis, winner of last night's round 1 of the 2012 AMA Pro Flat Track Harley-Davidson Insurance Grand National Championship presented by Motorcycle-Superstore.com season at the Daytona Short Track.  Thanks to Miriam Deitcher and her Facebook Flat Track Live for putting this vid together with JL10:

You can read the story of the race here thanks to Paul Carruthers and Cycle News.com:

The Daytona News-Journal was on-hand at the Daytona Short Track I last night, and Godwin Kelly talks about the happenings of the race and Johnny Lewis getting his first AMA Grand National win:

Dave also maintains his own detailed website, FlatTrakFotos.com.  You can go here to check out his results lists and album of pics from last night's round 1 at Daytona (site usually updated within 3-4 days of each event):

Chew Larcom and Mia Moore, The Fans in the Stands from FlatTrack.com, put up this great gallery of pics from last night's round 1 at the Daytona Short Track.  Thanks guys!