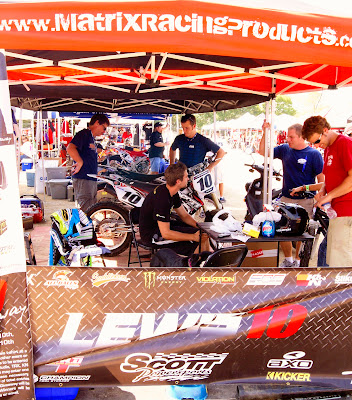 While rider Johnny Lewis talks with other members of the racing community, Mike Scott and another team member from the #10 Scott Powersports/Dubach Racing Developments/Saddlemen/Triple J Racing-sponsored team look over Lewis' CRF450Rs prior to practice at round 15 of the 2011 AMA Pro Flat Track Harley-Davidson Insurance Grand National Championship presented by Motorcycle-Superstore.com season at the Illinois State Fairgrounds.

"JL10" in only his 3rd season of competing in The Rolling Thunder Show pulled out a 7th-place finish in the overall point standings of the series, failing to make only three of the 20 events on the season's calendar (Salinas & Springfield STs, Sacramento Mile.)  With a roaring start to the season at last year's Daytona Short Track doubleheaders, Lewis carded a pair of 2nd-place finishers behind double-round winner Sammy Halbert, and then backed those results up with an 8th-place finish just over a month later at round 3 at the DuQuoin Indoor Short Track.

Look for the Scott Powersports team and rider Johnny Lewis to be in the front running group at the Daytona Short Track rounds tomorrow and Friday night for the opening salvo of the 2012 AMA Pro Flat Track Harley-Davidson Insurance Grand National Championship presented by Motorcycle-Superstore.com season.  This will be their third full season working together on the Singles Series and the Twins Series programs, and after finishes of 10th (2010) and 7th last year in the point standings, there isn't any reason to think they won't improve on that curve of bettering their position.

Stu's Shots wishes the Scott Powersports team and Johnny Lewis the best of luck for the 2012 season!


DAYTONA, Fla. (March 14, 2012) – During the past two seasons, Scott Powersports’ Johnny Lewis has come into the Daytona Short Track, the opening round for the AMA Pro Harley-Davidson Insurance Flat Track Championship, earning the fastest qualifying time. Last year during the double header he had his career best finishes with second at both races. Lewis’ goal this season, as the Daytona Short Track takes place Thursday, March 15 and Friday, March 16 this week, is to make it to the top of the podium on his Scott Powersports/DRD/Pit Posse Honda CRF450R.

Lewis begins the 2012 AMA Pro Flat Track Championship having his best season last year. He stood on the podium three times; the two Daytona Short Track races and the Hagerstown Half-Mile that saw him earn his first podium in a Twins race. Lewis’ primary goals this season are to earn a top five position in the championship and win at least one race while exposing more consumers to his sponsors. Lewis will continue to run national number 10 this season.

“I am dedicating this and every Daytona Short Track in the future to my friend and former mechanic Mark “Tex” Adams who lost his life January 26 when he was struck by a car while helping a lady on the side of the road,” said Lewis who has ridden for Pennsylvania’s Scott Powersports the past three seasons.

“Exactly seven years ago I met Mark. After winning the AMA Sports Athlete of the Year and AMA Sports Flat Track Horizon Award, I was testing a KTM 450 Supermoto bike with Mark and my father. Mark was a Factory KTM mechanic at only 21 years old, flown in to help me prepare for a KTM Supermoto test I had coming up a few weeks later. Mark went from helping me during my time as a Factory KTM Supermoto racer to wrenching for Kurt Nicoll, Sebastien Tortelli, Ronnie Renner and Josh Hansen and to working with the Nitro Circus crew. Mark built custom bikes and also worked at JGR MX during two different occasions. He was an amazing friend – the kind of friend you didn’t have to talk with every day to know when you called him he would be there for you. Mark was more like the big brother I never had. He may be gone but he will always be with me looking over my shoulder!”

At the Daytona Short Track, Lewis will compete on a Mike Scott-prepared #10 Honda CRF450R. During Twins races, Lewis will race on the Mike Scott-built #10 custom Kawasaki Ninja 650 flat tracker that saw success last year and will be in its third season of racing.

Lewis added, “Thanks to Lou Debarbieri from Lou’s 50 Yard Line for providing my wife, Alysha, myself and my mechanic Tom Draina his beautiful beach house in Melbourne Beach for the week leading up to the Daytona Short Track races.”

Event information is available at www.amaproracing.com/ft.

Stop by the Scott Powersports pit to meet Lewis and get an autographed poster. Then, watch him on the short track at the famed Daytona facility on his Scott Powersports/DRD/Pit Posse #10 Honda CRF450R in his AXO gear, Arai helmet and AXO Freedom Flat Track boots. Keep up with Lewis on Facebook at www.facebook.com/lewis10 and his website at www.lewis10.com.

Professional athlete Johnny Lewis of Coatesville, Pennsylvania has been competing in the AMA Pro Flat Track Grand National Championship (GNC) for the past three seasons, earning seventh during the 2011 season with three podiums and a race lead. Prior to flat track, Lewis raced in the AMA Pro Supermoto Championship for three full seasons, two as a factory rider, where he was the youngest to ever win in the Unlimited Class. He won many championships, accolades and races as an amateur dirt track competitor. In 2012, the 22 year-old Lewis will race the number 10 Scott Powersports/DRD/Pit Posse Honda CRF450F in AMA Pro Flat Track Singles events and the number 10 custom Scott Powersports/Saddlemen Kawasaki Ninja 650 flat tracker in AMA Pro Flat Track Twins races.