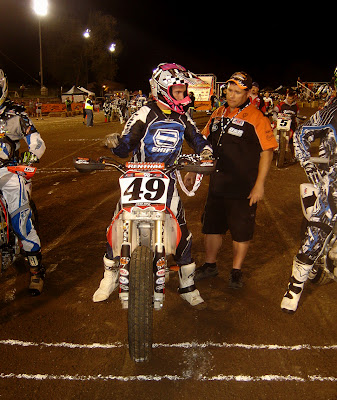 Chad Cose lines up the #49 Digger Helm/Lightshoe/Arlen Ness/VC Graphix-sponsored Honda CRF450R on the front row for the National main event at round 13 of the 2010 AMA Pro Flat Track Grand National Championship season at the Springfield Short Track on September 3.  After qualifying second on the evening behind fast-man Chris Carr, Cose was able to qualify for the main via winning the second heat on the evening, after also earlier finishing 4th in the Dash for Cash.

Cose has proved himself to be a hard charger in the series, and decided to go out on his own for the 2012 AMA Pro Flat Track Harley-Davidson Insurance Grand National Championship presented by Motorcycle-Superstore.com season, and will be fielding a Honda CRF450R in the Singles Series events and a Kawasaki Ninja 650R-based mount for the Twins Series events.

After a rough start in round 1 at the Daytona Short Track I on March 15, Chad was able to qualify for the main event in round 2 at Daytona and pulled off a 15th-place finish in the National main on his C.R.C. Racing Honda.

Chad Cose stands next to his C.R.C. Racing Honda CRF450R in Florida during bike week in March 2012.  Photo courtesy of Chad Cose Racing by Jen Lewis.
---------------------------------------------------------------------------------------------------------------------------
Next up would be the start of the AMA Grand National Flat Track season in Daytona.  This would also be the debut of my new team C.R.C. Racing.
We qualified 10th and I was excited to get out there and race.  Maybe it was the long off season or the excitement of how good I felt but the heat race would prove to be a test to say the least.  I ended up going down in turn one collecting about 3 other riders, one being a good friend of mine Jimmy Wood who suffered a broken elbow.  I really hated to see Jimmy get hurt like that the first race of the season on the first lap of the heat race.  I hope he gets better soon.
As for me I was a little beat up but in better shape than my bike.  It wasnt in any condition to make the restart which meant I was headed to a semi.  A third row outside start in my semi meant I would have to make quick work to get a top 3 transfer to the main.  I got a great start and headed to the high line to pick off as many guys in turn one as I could.   Unfortunately some riders went high and got into me and I went down once again.
Another restart and this time I was on the fourth row.  In my ten lap semi I went from 18th to 5th and posted the fastest lap time of the race.  It was such a huge disappointment knowing I had the speed and coming from so far back to not qualify for the main, but that's why they call it racing.
Day two of Daytona I had a shot at redeeming myself and making up some points in the championship after failing to qualify the first day after just about everything that could go wrong did.  In qualifying I was up to 2nd fastest overall at one point but would finish qualifying 14th overall.
In my heat I went on to finish 6th and would have to go to a semi.  I couldn't really hit the nail on the head with what was going on with my starts but I struggled off the line in Daytona.  In my semi I got off the line 5th made the passes I had to and was about a bike length short of a win in my semi taking second and punching my ticket to the main.
The track was brushed off and pretty slick which made for a pretty one lined race.  I made about 3 passes and brought home a 15th place finish.  Not the result we were looking to come out of Daytona with but we answered with some points after the horrendous first day we had.
All in all I am going to stay positive about this one even though I'm definitely disappointed.  There were some positives, my arms felt great after my off season surgery, we fought through a tough first night and we are healthy going into round 3 in Springfield, Illinois.
I'm sitting 15th place in points about 10 points out of 10th so I'm looking to make up some points come time for round 3.  We have proven we have the speed to run up front at Springfield and a podium is definitely the goal.  In the mean time ill be preparing myself and bikes to be ready to go for that.
Thanks to everyone on board this year, friends, family, fans, sponsors and everyone who supports C.R.C Racing.
Chad Cose 49
To become a partner or follow the progress of C.R.C Racing and Chad Cose you can find news, updates and race results on the sources below.
"I would also like to thank all the great people on board C.R.C Racing for the 2012 season".
ChadCose.com
Follow Chad Cose on Twitter