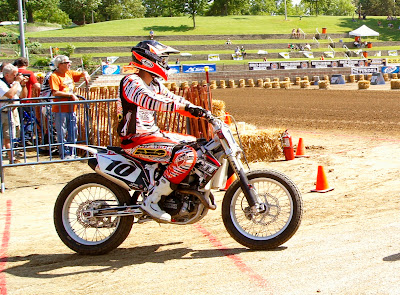 Johnny Lewis gets ready to roll out for practice on the #10 Scott Powersports/Dubach Racing Developments/Saddlemen/Triple J Racing-sponsored Honda CRF450R for round 7 of the 2011 AMA Pro Flat Track Harley-Davidson Insurance Grand National Championship presented by Motorcycle-Superstore.com at the Springfield TT on May 30.  Qualifying for the National main event via a 3rd-place finish in his semi race, JL10 went on to work his way through the 19-rider field to a hard-fought 13th-place finish.  Lewis would finish the year ranked as the 7th ranked rider in the overall point standings, for his best-ever finish in the series in his three full years of campaigning the circuit.

On Thursday, March 15, 2012 Lewis broke through for his maiden victory in the AMA Pro Flat Track Harley-Davidson Insurance Grand National Championship presented by Motorcycle-Superstore.com after leading all 25 laps in the National main event.

Press release courtesy of MotoPR, on behalf of Scott Powersports/DRD/Saddlemen

DAYTONA BEACH, Fla. (March 20, 2012) – The definition of perseverance is steady effort in light of difficulties. Without perseverance and dedication, even the most talented athletes throw in the towel. This is not so for Scott Powersports/DRD/Saddlemen’s Johnny Lewis. After three seasons of driven talent and many challenges, he got his first win in the AMA Pro Harley-Davidson Insurance Grand National Championship presented by Motorcycle-Superstore.com at the opening round, the Daytona Short Track on Thursday, March 15. Lewis led the entire main event. During round two on Friday, March 16, he finished eighth after taking the lead on the final lap followed by an unexpected collision that put him on the ground.

Prior to the opening round, Lewis dedicated the Daytona Short Track races to his friend and former KTM factory mechanic, Mark “Tex” Adams. Lewis’ first win was deeply personal.

“I cannot thank everyone enough for their support this weekend,” said Johnny Lewis who wears national number ten. “I have some of the most positive and respectful people around me. I had such a wonderful trip to Florida. Thanks to the people who opened their doors to me and my wife Alysha. It fed me with the drive, respect and desire to show everyone that it’s not only about hard work – the journey is about believing in yourself and the people around you. I miss my buddy Mark "Tex" Adams right now, but I’m grateful to have him watching over me. I know he would have been proud of my first win, and for stalking the leader for 24-1/4 laps [at round two] making one of my most beautiful passes ever. Then, for being knocked down, spun around and picking up my bike in third gear and still only finishing 3.5 seconds off the leader for eighth place. I hope everyone can find what I have found these last few months in my life that has transformed who I am today.”

Lewis came to Daytona Beach, Fla. with a renewed focus – ready for competition at the Daytona Short Track at Daytona International Speedway. Even though Lewis qualified 15th for the night program for AMA Pro Flat Track Harley-Davidson Insurance GNC round one, he went out on his Scott Powersports/DRD/Saddlemen Honda CRF450R in his AXO Trans-Am gear to show the fans and his competitors that this was his night. In heat race number three, Lewis transferred directly to the main event by winning the race outright in ten laps. He also notched the fastest lap time of all three heat races.

The heat race win put Lewis in the Dash for Cash. In the four-lap race, Lewis finished fifth. But he was not discouraged. His perseverance would soon prevail.

Lewis rolled his Pit Posse/Outlaw Racing-sponsored Scott Powersports Honda to the line for the 25-lap main event. With the fastest heat race time, he got the first gate pick in the main event and selected a line that had a rut. Lewis would show that perseverance the past three years, learning along the way including at the RIDE Academy where he teaches, would win. He holeshot the 25-lap main event, switching lines during the race for smoother spots that would continue to see him at the front.

On Friday, March 16, the athletes returned to the Daytona Short Track for round two. With a humbling win, Lewis was focused on this race now and specifically his program. During qualifying, he would hit the ninth fastest time improving from the previous day.

Once again the Wallace Trucking-sponsored Lewis was in heat race number three during the night show. He got a good start off the line thanks in part to his DRD exhaust, a company that has supported him since 2008. In the ten lap heat race, Lewis couldn’t make a safe move around the leader. Lewis crossed the finish line in the second spot, which preserved a place in the main event and the Dash for Cash.

In the Dash for Cash, Lewis was in the hunt for the $1,000 check and five extra points toward the championship. After the intense battle, he crossed the finish line in second on his Scott Powersports Honda.

In the main event during round two at the Daytona Short Track, the long-time Silkolene-sponsored Lewis again knew he had the fast line on his Scott Powersports/DRD/Saddlemen Honda CRF450R and was immediately in the top five. Competitor Jared Mees was leading the race lap-after-lap like Lewis did the previous night. However, right after the white flag for the final lap flew, Lewis dug deep and made a clean pass underneath Mees to take the lead. Mees was not about give up and made a move on the inside, bumping Lewis which resulted in a crash. Lewis quickly spun around and got back up in third gear and was able to recover for eighth place.


With two rounds of the 19-round AMA Pro Flat Track Harley-Davidson Insurance Grand National Championship presented by Motorcycle-Superstore.com in the books, Lewis sits in third place with 40 points.
The AMA Pro Flat Track Harley-Davidson Insurance Grand National Championship presented by Motorcycle-Superstore.com has a break before the long-running Springfield weekend in May. Race fans make your travel plans for the Springfield TT on May 26 and Springfield Mile on May 27, which will be the first time series athletes compete on the bigger Twins machines.
Both races are at the Illinois State Fairgrounds in Springfield, Ill. Event information is available at www.amaproracing.com/ft. During the two Springfield races, stop by the Scott Powersports pit to meet Lewis and get an autographed poster. Then, watch him during the Springfield TT on his Scott Powersports/DRD/Saddlemen #10 Honda CRF450R in his AXO gear, Arai helmet and AXO Freedom Flat Track boots and on his Scott Powersports/Saddlemen custom Kawasaki 650 flat tracker in his custom AXO leathers during the Springfield Mile.
Keep up with Lewis on Facebook at www.facebook.com/lewis10 and his website at www.lewis10.com.
About Johnny Lewis