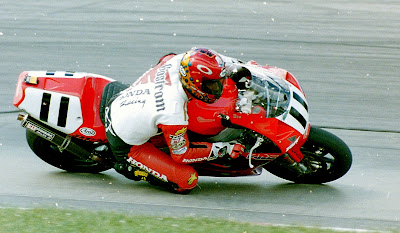 Ben Bostrom leans the #11 American Honda/Dunlop/Arai/Alpinestars-sponsored Honda RC45 through a turn while qualifying for the Wiseco Superbike 100 race during the Honda Super Cycle Weekend presented by Dunlop Tire at Mid Ohio in July '98.  The soon-to-be '98 AMA Superbike Champion would go on to bag the title in the premier road racing class in the United States without winning a single event, and only finishing out of the top five all season in only two rounds.

BBoz has raced for a handful of teams throughout his road racing career, not only in America but in his time spent across the pond contesting the World Superbike Championship in the early '00s while racing a Ducati V-Twin.  Upon his return to the States he would team-up again with American Honda, and again race for a U.S.-based Ducati team after having raced for the Vance & Hines Ducati team in '99 before heading to Europe.

Switching to the Graves Motorsports Yamaha team in the '07 season, the elder of the Boz Bros would contest the AMA Superstock Series presented by Dynojet Championship, where he would finish 2nd behind '07 AMA Superstock Champion Ben Spies, doing so on overall consistency with zero wins to Spies' series' leading seven wins, 292-264 points.  Only Aaron Yates and Jake Holden, with the Jordan Motorsports team, would win any of the other events during the 2007 season in the superbike-lite class.

For the 2008 season, Bostrom and the Graves team would change things up dramatically, with BBoz contesting what was now called the AMA Supersport Championship Series after two decades of being run under the title of the AMA 600 Supersport Championship Series.  Bostrom would demolish the competition while riding the Graves Yamaha YZF-R6 in winning 8 out of 11 events and only finishing off the podium one time throughout the season (Miller Motorsports Park.)

With the official takeover of the series from the AMA to the Daytona-based DMG ownership, for the third year in a row the old '600' series would be renamed again, and ultimately combined with the now-defunct AMA Formula Xtreme Championship, but with DOT tires mandated for what was now to be called the AMA Daytona SportBike Championship.  Bostrom only ran two races in the class during the '09 season, and won the season-opening Daytona 200 as well as the Laguna Seca round while riding a Graves Yamaha R6.  The rest of the season he would contest the AMA Superbike Championship riding the team's potent Yamaha YZF-R1, and during the 2010 season he would win the Laguna round for the Graves Yamaha-backed Pat Clark Motorsports team.

2011 saw Ben head to the Michael Jordan Motorsports Suzuki team, and would contest the AMA Superbike Championship on their GSX-R1000 mounts.  Re-upping with the #23 team for the new season in 2012, Bostrom started the season on a big down note with finishes of 13th and 15th in both Daytona rounds.  But something must have really clicked for the team during the Homestead-Miami test held over the last two days in Southern Florida, as BBoz was back at the top of the charts on the Jordan Suzuki, with team mate Roger Hayden a close second.