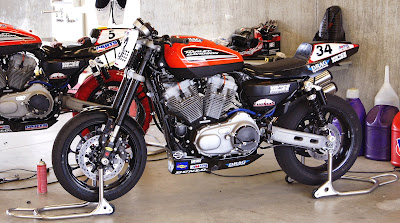 The #34 Drag Specialties/Vance & Hines/RS Taichi/Sidi-sponsored H-D XR1200 of Michael Barnes sits on the stands inside the Indianapolis Motor Speedway garages during the AMA Pro Road Racing XR1200 Series test at IMS on August 19, 2011 the week before the machines of iron were set to make their debut at the 4th Annual Red Bull Indianapolis MotoGP round as part of the racing undercard.  Team mate and 2011 AMA Pro Vance & Hines XR1200 Series runner-up Steve Rapp's #5 Parts Unlimited/Vance & Hines-backed XR1200 gets the tire warmer treatment just prior to the fourth and final practice session at the century old facility.

In the second (and first full) season schedule of the XR1200 class, both Barnes and Rapp had great seasons in the growing series, with Barnes 6th in the series after the season-ending ninth race of the year at New Jersey.  Rapp, along with his runner-up in the championship to winner Chris Fillmore, also carded two 2nd-place finishes over the course of the Indy weekend, the series' penultimate rounds, while Barnes carded two 4th-places at the Brickyard.

At the 2012 season kick-off in Daytona, 20 riders qualified for the opening round, with 18 finishing the 7-lap race.  Kyle Wyman took the win, with 2011 Indy winner Tyler O'Hara in second, Barnes 3rd, with David Estok and Darren James rounding out the top-5.  2011 XR1200 Champ Chris Fillmore is now riding the HMC/KTM full-time in the AMA Superbike Championship and Rapp rode an Attack Performance-backed Kawasaki ZX-10R in the season-opener as well, and is hoping for more sponsorship to be able to stay in the premier class throughout the '12 season.

Barnes is now riding for the Bartels H-D team with a very sweet-looking orange-and-white paint scheme, and was in the running for the win right down to the checkered flag at Daytona, finishing just .412 seconds behind winner Wyman.

It was just announced that H-D and V&H are ponying up another $60K in year-end monies (on top of the already-announced $60K point fund for the 2012 AMA Pro Vance & Hines XR1200 Series Championship) that will be divided up amongst the top-10 in the finishing order, based on a 5-race shoot-out format, ala NASCAR and NHRA's 'chase for the championship,' which could make for some even-more exciting racing out of the 500 lb.+ spec class.