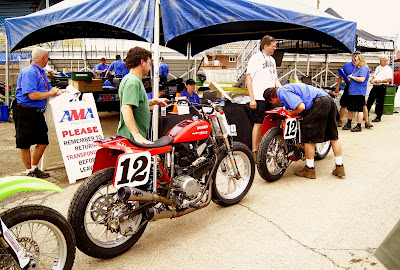 When round 6 of the 2011 AMA Pro Flat Track Harley-Davidson Insurance Grand National Championship presented by Motorcycle-Superstore.com was finally ready to go at the running of the Springfield Mile I on May 30, former Grand National Championship competitor (and former National #23) Kevin Atherton and Lloyd Brothers Motorsports co-owner Dave Lloyd were ready to go at the legendary Illinois State Fairground oval.  Getting the bikes through AMA Pro Flat Track's tech check process was just the first step in ensuring that their new rider, Brad Baker, and his Ducati 1098-based mounts were also ready to go.

As it ended up, they all were indeed ready as Baker went on to not only nail down fast time in his first full-time ride on a Twins Series machine, but by also winning the fastest heat of the day on the LBM/TeamHurtByAccident.com/Foremost Insurance/ENI USA-sponsored mounts.  Unfortunately a front end wobble forced him to "settle" for 5th in the 18 rider National main event, but at day's end the future 2011 AMA Pro Flat Track Rookie of the Year and the Lloyd Brothers team knew that they had a great year ahead of them.

Fast forward to the fast-approaching 2012 AMA Pro Flat Track season.  Baker has gone off to ride Kawasakis for Kenny Tolbert and Bill Werner, and the LBM team is forced to look for their third new rider in the last three seasons.

Turning to a man who has worked with the team in the past, and who before Joe Kopp had won the Arizona Mile I in May 2010, had gotten the team their best finish in an AMA Grand National race (at Lima several years before on their Aprilia-based mount), co-owners Mike and Dave Lloyd signed on 2-Time AMA Grand National Singles Champion Henry Wiles to fill the seat of the Ducati-based V-twins.  The machine proudly displayed Wiles' National #17 at Indy several weeks ago while it was on display in the Lloyd Brothers and ENI USA booth.

In what is surely a win-win situation for the Lloyd Brothers team AND for star rider Wiles, their season officially starts tomorrow as the 2012 Steve Nace Racing AMA All Star National Flat Track Series drops the first green flag on the new season at Oglethorpe Speedway Park outside of Savannah, GA.  And this team, along with a BIG handful of AMA Grand National Championship regulars, will be on-hand to kick the flat track season into full gear for the new year.

Talking with team co-owner Dave Lloyd last night, the team is "very excited to get going for the new year.  We've been down here for the last couple of days, used Wednesday for a test day for us and Henry to get a baseline going, and are planning on running the practice session on Thursday (today, March 8) to help us further dial in the bikes."

According to Lloyd, five of the team members are on-hand in Savannah.  "Yeah, between the five of us we are sharing one motel room.  Henry and I were up until 2:30 AM the night before, talking the night away about the new year.  I'm getting ready to go blow up my air mattress to sleep in the motor home tonight.  We're all real pumped about the new year and ready to go racing.  I've only got a few loose ends to tie up with our sponsorship, but everything looks pretty good for us in that respect."

When I got a chance to talk with Dave's brother, Mike at the 2012 Indy Dealer Expo back on February 17-18, he also was looking forward to having Henry in the seat and getting the year going.  "We really tried to put things together with Hank for last year, and things fell apart at the last minute.  He's a great young man and knows bike control, and we all know one another well from our past relationship."

Another big change for the team this year is that the 'Ducati' name has been removed (unfortunately) from the tank.  And since the Springfield Mile II round in September 2011, has been adorned with 'NickyHayden.com.'  Per Mike Lloyd, the team took Ducati's name off of the bike.  "The best help they would give us was dealer cost on parts.  After all of the exposure we have gotten them in this sport, we took it off.  I can get that kind of break at any Ducati dealer in the nation."  As a result, the LBM name and Nicky Hayden's name are central to the tank now of the 2012 versions of the bike.

The bike in front in the tech line shot, above, is the original 1098-based mount that the team started with a few years ago.  "Yeah, that's the first motor we worked with when we switched to Ducati that Larry Pegram had in his garage.  It's also one of the four we have ready to go now, two for the half-miles and two for the mile races," stated Mike.  It's also one of the two that Nicky Hayden kicked in some money and sponsorship for to help them rebuild after it let go at the Sacramento Mile late last July.  "I can't say enough about Nicky, he's just an all-around great guy."  And according to both brothers, once The Kentucky Kid returns to flat track after his MotoGP career is over "he'll always have a ride with us!"

As it turned out, that plan falling apart  for '11 actually worked better for everyone, except Henry of course.  After suffering a leg injury at round 3 in DuQuoin, Hammerin' Hank pulled off what only someone of his style and caliber of rider could, and went out to Salinas and won the short track the next weekend.  But when the weekend was over, Hank was under the knife to repair his injuries and his season looked dim, at best, at the end of April.

Little did anyone know-except Hank!-that less then three months later he would be back on a Twins machine (at Lake Odessa riding for Greg Crow Racing) and finishing 12th on the night.  Less then 30 days later, Hammerin' Hank returned to the track he all but owns and won his 7th consecutive Peoria TT.  And 15 days later backed it up with his 5th win-in-a-row at the Springfield Short Track.

"Our testing went real well today," continued Dave in our conversation from last night, "and we are really excited to be working with Henry again this year.  Kevin (Atherton) is working again with us this year and is down here with us, too.  We got a lot done today, and tomorrow we'll run the practice session and be ready to race come Friday night."

With that practice session set to start in a matter of minutes (as of this writing), the Lloyd Brothers Motorsports team and a large contingent of AMA Pro Flat Track regulars look to converge on the first flat track race of the 2012 season.  Riders like Jared Mees, Jake Johnson, Sammy Halbert, Brad Baker and a LARGE handful of others will be on-track tonight to iron out what kinks may need ironing before the first green flag drops on the new season of racing.

But the Lloyd Brothers team will have one big thing going for them which they haven't had in several years.  A great rider that has worked with the team in the past.  And that in itself should help put them at least a step-or two-ahead of the start of their last couple of seasons.  Should that step make the difference, then one of the hardest working teams (and most likeable) in flat track racing will be ready to jump on it.  It's sure going to be fun to watch as it all unfolds this year! 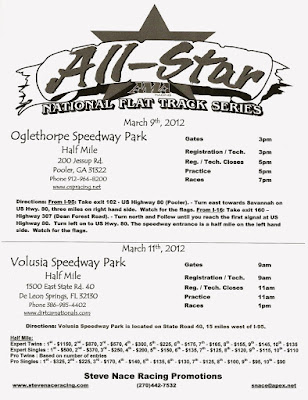 The sheer determination of a champion is shown in the face of Henry Wiles as he gets ready to lead the 18-rider field away for the start of round 14 of the 2011 AMA Pro Flat Track Harley-Davidson Insurance Grand National Championship presented by Motorcycle-Superstore.com at the Peoria TT on August 21.  25 laps and just less than 11 minutes later, Hammerin' Hank would make a return to winning as he would win his 7th consecutive National main event at the track he has all but owned since the '04 season (the '07 race was rained out) on his #17 Monster Energy Kawasaki/Jones Bros/Don's Kawasaki/Shift Racing-sponsored KX450F.

Wiles will again be riding the Don's/Jones Brothers Kawis in the 2012 Single Series events, and will be returning to a team in the Twins Series in which he is very familiar, again riding for the Lloyd Brothers team he last rode for during the '09 season.

The hardest working lady in flat track, Miriam Deitcher, will be on-hand at both rounds of the season-opening events at Savannah and Volusia, and will be providing updates on her Flat Track Live on Facebook.  You can follow those updates here:

And Pooler, GA. (just west of Savannah) weather info can be found here:

And De Leon Springs, FL. (north-northwest of Deland) weather can be found here:

You can also get info on the rest of the 2012 Steve Nace Racing AMA All Star National Flat Track Series here, thanks to SNR's official site (note-full results are usually posted within 2-3 business days after each event):