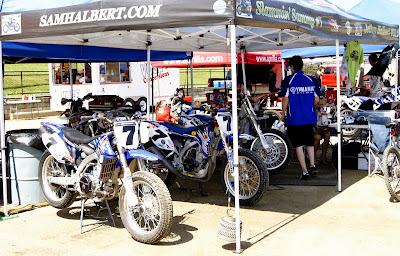 Crew chief Andy Halbert works about the pit area of brother Sammy's Yamahas during round 7 of the 2011 AMA Pro Flat Track Harley-Davidson Insurance Grand National Championship presented by Motorcycle-Superstore.com at the Springfield TT on May 30.  The hardest working woman in flat track, Miriam Deitcher, goes about filing her race reports (partially hidden) as Andy moves about.  Brother Sammy took the #7 Woody Kyle Racing/Fredericktown Yamaha/Kings Kustoms/Fluid Suspension-sponsored YZ450F to a hard-earned 5th place in the National main in the rain delayed event at the Illinois State Fairgrounds Rodeo-Multipurpose Arena. 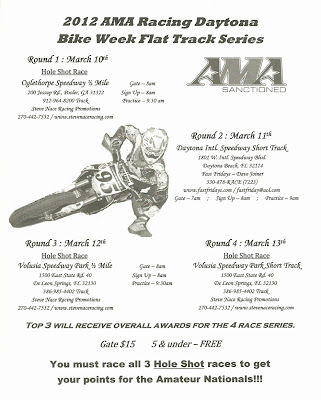 With the rain delayed event at Oglethorpe Speedway Park outside of Savannah causing havoc for all on Saturday, the racers headed south to Volusia Speedway Park in De Leon Springs, FL. for what would have been round 2 of the Steve Nace/AMA All Star Flat Track Series yesterday.  Unfortunately, due to severity of rains in the area, round 2 was canceled completely.  Vintage racing was the order of the day at Daytona, with Metro Racing posting below some results and photos.

For today and Tuesday, March 13, the action is happening at Volusia now with the 2012 Steve Nace/AMA Racing Daytona Bike Week Flat Track Series.  Both events today and tomorrow will consist of multiple classes, including a Pro round both days.  There have been changes from what the flyer above shows, however, in that the short track portion of the show is running today as this is being prepared and will run into late today, and the half-mile portion of the racing will take place tomorrow, Tuesday, March 13.  Again, both days will include Pro events, as Jared Mees, Sammy Halbert and a host of others are on-hand to do some final dialing in before the 2012 AMA Pro Flat Track season kicks off at Daytona on Thursday, March 15 and Friday, March 16.

Brad Baker managed to get some testing in with Kenny Tolbert in Alabama, and is also on-hand today at Volusia with his Tolbert-prepped Werner Springsteen Kawasaki KX450Fs. See some pics of them below in the links I have posted.

Miriam Deitcher, the hardest working woman in flat track racing, is still keeping everyone up to date on the happenings from over the weekend and into the new week during Daytona Bike Week events.  You can follow her from here, as she reports on the goings on at Volusia today and tomorrow:

Dan ran real well at Oglethorpe in the delayed All Star races on Saturday, which were run in conjuntion with the Pro Am program that was already scheduled for Saturday.  Practicing his own CRF450R-partially sponsored by Indy's Jeff Gordon/Speedway Engines-Dan carded a 3rd place finish in the Pro/Expert Singles class behind Sammy Halbert and Brandon Robinson.  Wierbach Racing's Ryan Wells ended up 4th in that race.

He then jumped on Nick Cummings' XR, which he had been practicing on during the test and practice sessions at Oglethorpe on Wednesday and Thursday, and went out and got a 2nd place finish behind '10 AMA Pro Singles Champ Jeff Carver.  Cory Texter and Shawn Baer rounded out the top 4 in that heat race.  The Expert Twins main was canceled due to the late running of the rain delayed program, and riders were paid according to their heat race finishes.

Chew Larcom and Mia Moore, The Fans in The Stands from FlatTrack.com, were also on-hand at Oglethorpe on Saturday.  They will also be reporting from Volusia today and tomorrow.  You can follow their posts here on Facebook:

Chew and Mia also posted these results from the Pro Am and delayed All Star event at Savannah from Saturday.  Due to the rain delay from Friday's original event, part of the program wasn't able to get run due to all the Pro Am classes already scheduled at Oglethorpe for Saturday.  One of the main events that had to be scrapped was the Expert Twins main.

Check out the results here from FlatTrack.com, and big thanks to Chew and Mia again:

And you can check out some of Mia's great pics here from Saturday outside Savannah:

Sammy Halbert got a chance to talk with AMA Pro Flat Track, and you can read what he has to day in their rider profile here:

Sammy also was able to pen a new column for the latest digital edition of Cycle News, and he doesn't hold back on what his thoughts and views are going into the 2012 AMA Pro Flat Track Harley-Davidson Insurance Grand National Championship presented by Motorcycle-Superstore.com season.

Sammy has also posted some pics on his Twitter account, and last week had a couple of short video links on here getting final prep done on his XRs:

Metro Racing out of New York (the fine folks who supplied the Gary Nixon tribute jerseys to the riders at the Peoria TT in August 2011) have been posting pictures from Volusia yesterday and look to be on-hand again today.

Brad Baker posted some recent shots of testing in Alabama with Kenny Tolbert and should have more as the week goes on here on his Twitter account: