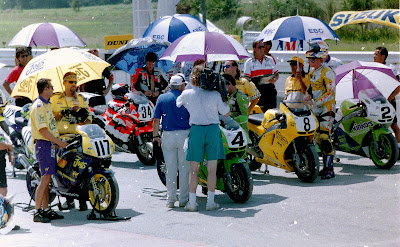 A hot and sultry weekend greeted the riders at Gateway International Raceway in August 1995 as the ranks of the AMA Pro Road Racing series headed to the track located just east of  the St. Louis Arch and across the Mississippi River for the Gateway Superbike Nationals.  In what would be horrendously humid conditions throughout the weekend, the stars of the premier road racing series in the United States would put on a show for the fans in what would be the series' first and only appearance at the track, located just across the street from one of the local landfills.

For what was at that time one of the top support classes in the series, the AMA HP4 600 SuperSport Series gets ready to do battle in one of the five finals for the final day of racing in Madison, IL. in what would be the 22 lap final for the DOT tire-shod event.

On the second row just behind Ludington you can catch a glimpse of Pascal Picotte's #112 Muzzy Kawasaki, while Michael Barnes zips up and holds his umbrella next to the #34 Erion Racing/American Honda/Bridgestone/Honda Parts & Accessories-backed mount.  Duhamel went on to win the lone race at Gateway to add to his legend as the all-time 600 SuperSport Series champion and race winner.


With the 600 SuperSport series morphing into SuperSport, and since the 2009 season the Daytona SportBike Championship Series, the middleweight bikes now hold the distinction of being the 'premier' show at the season-opening round at Daytona Beach.  Comprised of a good mix of twins, triple and four cylinder machines, the series has produced a good mix of manufacturers and riders over the last few seasons.

With the Daytona 200 scheduled for Saturday, March 17, AMA Pro Road Racing and SpeedTV today announced the television viewing schedule for the upcoming season-opening round for next week.  Besides the Daytona 200, the Daytona event will include two rounds of the AMA Superbike Championship and AMA SuperSport Championship, as well as one round of the Vance & Hines XR1200 Series.

DAYTONA BEACH, Fla. (March 6, 2012) - SPEED™, the nation's first and only cable television network dedicated to automotive and motorcycle racing, performance and lifestyle, will once again serve as AMA Pro Road Racing's broadcast partner in 2012. Fans of AMA Pro can tune in to SPEED on Saturday, March 17, 2012 beginning at 1:30 p.m. ET/10:30 a.m. PT to catch all of the AMA Pro Road Racing action from the season-opening DAYTONA® 200 Week at Daytona International Speedway in a set of back-to-back broadcasts.
SPEED's coverage of AMA Pro Road Racing at Daytona International Speedway will begin with AMA Pro National Guard SuperBike Race 1, scheduled to air in a one-hour program on Saturday, March 17 at 1:30 p.m. ET/10:30 a.m. PT. At 2:30 p.m. ET/11:30 a.m. PT, viewers can catch the stars of the AMA Pro GoPro Daytona SportBike division as they compete in the 71st running of America's most historic motorcycle endurance race, the 2012 DAYTONA® 200.
Following the two-and-a-half hour DAYTONA 200® broadcast, coverage of Saturday's National Guard SuperBike Race 2 is scheduled to begin at 5:00 p.m. ET/2:00 p.m. PT.
Highlights of the AMA Pro Motorcycle-Superstore.com SuperSport and AMA Pro Vance & Hines XR1200 Series races from Daytona will be included in the SPEED broadcasts and also available live on SPEED2, an online-only racing network located at http://www.speed2.com featuring exclusive and same-day delay racing events, on-demand international motor sports content, as well as automotive and motorcycle enthusiast programming.
Friday's Vance & Hines XR1200 Series race and Motorcycle-Superstore.com SuperSport Race 1 can be viewed live on SPEED2 starting at 2:10 p.m. ET/11:10 a.m. PT, and before tuning to SPEED on Saturday, fans can log back into SPEED2 for a live online broadcast of the final SuperSport race, scheduled for 9:55 a.m. ET/ 6:55 a.m. PT.
The SPEED on-air team for AMA Pro Road Racing will include veteran motorcycle broadcaster Leigh Diffey providing play-by-play, with AMA Motorcycle Hall of Fame rider and five-time DAYTONA® 200 winner Scott Russell joining him in the booth for analysis. Longtime SPEED reporter and host Greg White will provide reports from the pits.
The 2012 AMA Pro Road Racing season will kick off with the historic DAYTONA® 200 Week, scheduled for March 15 - 17, 2012 at Daytona International Speedway. For tickets, please visit http://www.daytonainternationalspeedway.com.

About SPEED™
SPEED, anchored by its popular and wide-ranging coverage of NASCAR, is the nation's first and only cable television network dedicated to automotive and motorcycle racing, performance and lifestyle. Now available in nearly 84 million homes in North America, SPEED, a member of the FOX Sports Media Group, is among the industry leaders in interactive TV, video on demand, mobile initiatives and broadband services, including SPEED2, a groundbreaking new broadband network featuring live, streaming and on-demand events complementing offerings of the linear network. For more information, please visit SPEED.com, the online motor sports authority.