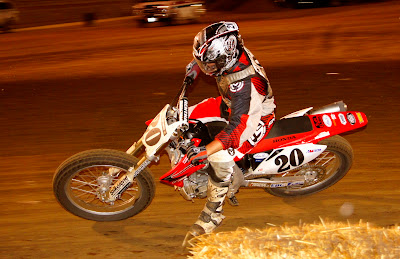 In route to a solid 9th-place finish at round 15 of the 2011 AMA Pro Flat Track Harley-Davidson Insurance Grand National Championship presented by Motorcycle-Superstore.com season at the Springfield Short Track, Matt Weidman finesses the throttle on his #20 SNIP/Shoei/R&D Springs/Fiorio Investments-sponsored Honda CRF450R coming out of turn 2 on September 3.  Matt had earlier qualified for the National main via his 3rd-place finish in his heat, and ended the season ranked as the 8th overall rider in The Rolling Thunder Show.

Matt set out for rounds 1 & 2 of the 2012 AMA Pro Flat Track Harley-Davidson Insurance Grand National Championship presented by Motorcycle-Superstore.com season at Daytona without what has been his regular team crew for the first time in his career, and came out on top of the box at round 2 at the Daytona Short Track II event for his first-ever AMA Grand National win after bettering the previous night's 2nd-place finish behind Johnny Lewis.  The previous night he had also tied his previous-best finish in an AMA GNC event (Lima 2011.)

Matt's rise to the top spot on the box has been a long-time family-supported effort.  His Mom, Rachel, and Dad, Guy have traveled to and from the races with Matt and just recently retired at the end of the 2011 season from traveling the grueling circuit full-time with their son.

Weidman now also holds the distinction of being in the points lead for the first-time in his AMA Grand National career, with some 60+ days until round 3 at the Springfield TT at the end of May.  He leads runner-up Jared Mees, 48-41 points, with Lewis in the 3rd positon with 40 points.

Matt won his first AMA Pro Racing Grand National at the March 16th Daytona Short Track.  After qualifying in 3rd, and positioning himself on the pole for the third Expert heat race, Matt passed John Lewis on the last lap of the heat race to win.

He got the initial holeshot in the 25 lap main event and was edged off the groove going into turn one and immediately dropped to 4th place down the back straight.  He battled back into 3rd and held that position until the final turn of the main.

Matt positioned himself for another Daytona Podium after finishing 2nd to Lewis Thursday night at round 1.  He had reconciled himself to a 3rd when he watched Lewis pass Mees on the final lap, and with a final turn to go, Matt said he knew there were going to be fireworks.

Sure enough, Mees attempted a pass on Lewis, only to blow the tiny black groove, allowing Matt to sneak up the inside and take the win by a bike length.

At 20 years old, Matt is one of an elite group of flattrack riders to win the coveted Daytona Short Track race.  He is the 156th Pro racer to ever Win a Grand National Race.

Matt has been a true privateer since 2010, riding his personally owned 2010 Honda CRF450R, and Dad's '08 Honda 450.  He has been financially responsible for 95% of his race program for the past two seasons and with his parents retiring from the race scene, he traveled alone to Daytona with his van, his Honda and a Dream.   He is dedicated, hard working, focused, and hoping for many more wins! 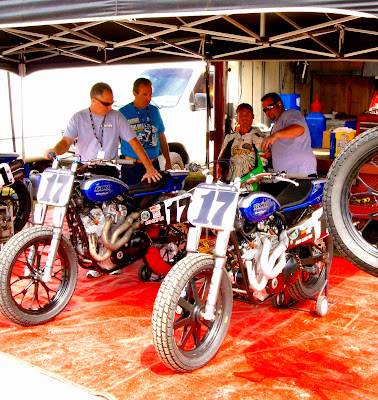 The Greg Crow Racing team talks in their pit area just before final qualifying for round 16 of the 2011 AMA Pro Flat Track Harley-Davidson Insurance Grand National Championship presented by Motorcycle-Superstore.com season at the Springfield Mile II on September 4.

Matt Weidman will be filling the seat on the GCR XR750s for the 2012 Twins Series season, with Henry Wiles #17 heading over to ride for the Lloyd Brothers Motorsports Italian V-Twin team.  The GCR/Gardner Racing-sponsored team runs a clean looking and dependable set-up.  Upon Wiles' return from April knee surgery at the Lake Odessa round on July 23, Hammerin' Hank took one of their mounts home into 12th-place after almost three months out of the saddle.