Kenny Tolbert works on the finishing touches of final preparations on Chris Carr's #4 American Motorcyclist Assoc/DFW Honda/Arai/Phoenix Racing-sponsored H-D XR750s before the first round of practice at round 6 of the 2011 AMA Pro Flat Track Harley-Davidson Insurance Grand National Championship presented by Motorcycle-Superstore.com season at the Springfield Mile I on May 29.  Tolbert and Carr were one of the strongest teams to ever compete in The Rolling Thunder Show in their many years together, garnering seven championships along the way before Carr hung up his leathers from full-time racing at the end of the 2011 season, where he finished 5th in his last-full season in the final point standings. 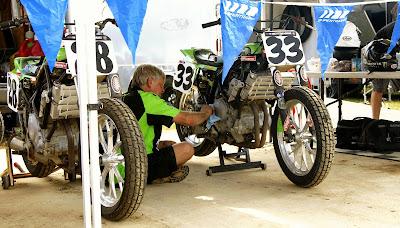 It was officially announced over the weekend that the former Harley-Davidson factory wrench will be supplying equipment and technical advice to the new Kenny Tolbert Racing team for the 2012 AMA Pro Flat Track Harley-Davidson Insurance Grand National Championship season, with Tolbert working on rebuilding the 650R-based parallel twins around ROY Brad Baker for the upcoming Twins Series season, scheduled to kick-off with the Springfield Mile I round on May 27.

One of the worst-kept 'secrets' during the off-season, it was pretty well known that Baker would be teaming with Tolbert after announcing to his former team, the Lloyd Brothers Motorsports group, that he would be riding for him in the '12 season.  Baker had advised the LBM team late in the 2011 season his plans moving forward.  The last piece in the puzzle was 'unofficially' confirmed several months ago, with this roll-out of the team's plans coming as the 'official' word on their plans to operate with the Kawasaki-brand machines instead of the XR750 which KT has become so well-known over the years.

Take the time to check out their sponsors and sign-up for updates on Facebook and with the team.  You can also submit directly off of the release in the lower right corner to become a sponsor with the team.  Very impressive, interactive and great looking release from KT!  Press release courtesy of Kenny Tolbert Racing. 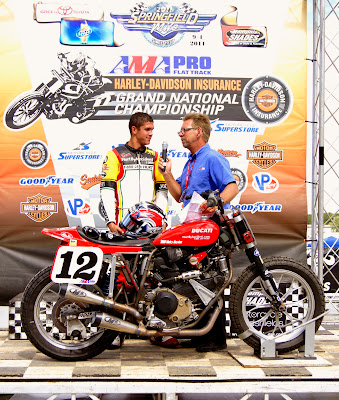 AMA Pro Flat Track official race announcer Barry Boone talks with semi-winner Brad Baker at round 16 of the 2011 AMA Pro Flat Track Harley-Davidson Insurance Grand National Championship presented by Motorcycle-Superstore.com season at the Springfield Mile II on September 4.  Baker had just taken the win on the #12 Lloyd Brothers Motorsports/TeamHurtByAccident.com/Foremost Insurance/NickyHayden.com-sponsored Italian V-Twin over Shaun Russell #28 and Steve Murray #51 to punch his ticket to the National main event, where he eventually finished in the 8th spot for the day.

After ending the season ranked in the 6th overall spot in the championship standings and taking the coveted Saddlemen AMA Pro Flat Track Rookie of the Year Award, The Bullet is now teamed up with Chris Carr's former tuner, Kenny Tolbert for the 2012 season.  Starting off the season on a very strong note, Baker scored finishes of 5th and 3rd at the season-opening rounds at the Daytona Short Track to put himself in the 6th spot in the 2012 standings with the two-month break before round 3 at the Springfield TT on May 26.

The new pairing with Tolbert has already proved to be very fruitful.  Baker and his new Kawasaki KX450F scored their initial win at the Volusia Short Track round of bike week, and ran very strong at Daytona.  The team has been testing in Texas and looks to be ready to hit the ground running when the season starts full swing at the end of May.  And with Baker's talents in the saddle paired with KT's talents spinning wrenches and help from Bill Werner, this should prove to be a very strong venture for the rest of the competitors that campaign the greatest racing show on wheels in the world.