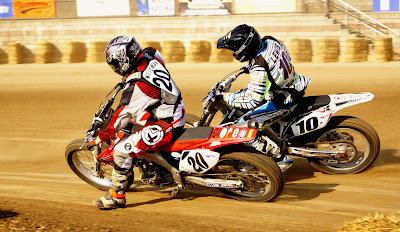 When the dust and minor carnage had settled, the season-opening rounds of the 2012 AMA Pro Flat Track Harley-Davidson Insurance Grand National Championship presented by Motorcycle-Superstore.com season saw two new winners emerge for the first time in several years in the series, let alone two first-time winners on the series' circuit.

Johnny Lewis on his #10 Scott Powersports/Dubach Racing Developments/Saddlemen/Silkolene-sponsored Honda CRF450R led all 25 laps of Thursday's round 1 at the Daytona Short Track to come out on top of the 19-rider National main event in his third full season of competing in The Rolling Thunder Show, leading Matt Weidman #20 and Daytona 2011 double-winner Sammy Halbert #7 home to top the box for his cherry-breaking win.

And if that wasn't enough excitement for the fans on hand and all fans of AMA Pro Flat Track competiton, '08 Rookie of the Year Matt Weidman took his #20 Matt's Racing/SNIP/Fiorio Investments/Shoei-backed Honda to the win on Friday in round 2 of the 2012 AMA Pro Flat Track Harley-Davidson Insurance Grand National Championship presented by Motorcycle-Superstore.com season over runner-up Jared Mees #9 and 3rd-place finisher and '11 AMA Pro Flat Track Rookie of the Year Brad Baker #12.  Mighty Matt only led the last few hundred feet or so (and the one that counts!) of round 2 after Mees, who had led the previous 24 1/2 laps, got into Johnny Lewis #10 causing Lewis to go down and Jammin' Jared to fall back to 2nd place.  Lewis did remount to finish 8th on the evening after hounding Mees in second all night.

Both Lewis and Weidman have been knocking at the door of that top spot on the podium for some time now, with both carding previous-best finishes of 2nd place during the 2011 season, and everyone that knows flat track and both of these fine young men, knew it was just a matter of time before each tasted the champagne on the top spot on the box, and it was great to see both be able to show their excellent capabilities in the 2012 season-opening rounds.  Congrats guys!

Several great stories emerged after the season-openers were in the bag at Daytona.  One of the great stories from my perspective was seeing Clermont, Indiana's Dan Ingram, at the ripe young age of 47 years old, make his comeback at Daytona in the Motorcycle-Superstore.com Pro Singles Series class.  Hard charger Ingram, who last raced on the AMA Grand National Championship circuit in '93 as an Expert (before being injured that season), slipped into the same leathers he wore back in the day, and made the main event of Friday night's program after qualifying 4th in the LCQ after having missed the field the previous evening out of the 72 riders who made a qualifying attempt.  Although Dapper Dan finished 18th in the final spot on the night after dropping it off the line, he showed the crowd on-hand and all of his fans that he has what it takes to race with the big boys again-and still!

Rookies Briar Bauman and Mikey Avila, last year competing in the Pro Singles Series, both qualified and made the mains in the Expert Singles classes on both evenings, making for what looks to be a great year of fighting it out for the Saddlemen Rookie of the Year Award for the 2012 season.  Last season's Rookie of the Year, Brad Baker, stepped aboard his new Werner-Springsteen Kawasaki KX450F for the season-openers, and with the help of multi-time championship tuner Kenny Tolbert carded 5-3 finishes for the season-openers.  And Kenny Coolbeth, Jr. on his #2 Chaplin Kawasaki carded 4-4 finishes to start the season off strong for the Connecticut resident and former 3-Time AMA Grand National Twins Champion and '07 AMA Singles Champion.

With now a 65 day break until rounds 3 & 4 of the season to commence at the Illinois State Fairgrounds for the running of the Springfield Mile I and last-running (for now) of the Springfield TT, Matt Weidman holds the lead in the point standings which he can relish on for the next two months for the first-time in his career.  Mees comes out with the second spot in the point standings, with Lewis, Halbert and Coolbeth rounding out the top 5.

In the shot above, Matt Weidman on his #20 SNIP/Shoei-sponsored Honda and Johnny Lewis on the #10 Scott Powersports/Dubach Racing Developments-backed Honda go at it during qualifying for round 15 of the 2011 AMA Pro Flat Track Harley-Davidson Insurance Grand National Championship presented by Motorcycle-Superstore.com season at the Springfield Short Track on September 3.

You can read all about the exciting season-opening rounds of the 2012 AMA Pro Flat Track Harley-Davidson Insurance Grand National Championship presented by Motorcycle-Superstore.com season in this week's Cycle News Digital edition, thanks to Paul Carruthers, with some great photos from CN contributor and AMA Pro Flat Track official photographer, Dave Hoenig here: