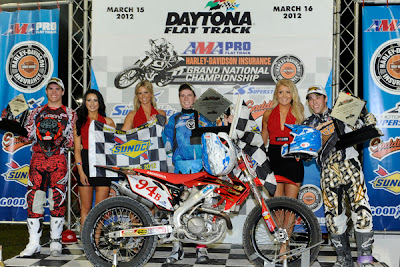 Here is a quick update from the AMA Pro Racing web site press release for the
Daytona short track held this past Thursday and Friday during bike week.

Thanks to everyone for all their support.

The Motorcycle-Superstore.com Pro Singles main truly was a runaway with no drama at the end.  16-year-old Ryan Wells made his second Pro race a huge success as he pulled his Weirbach Racing/General Engineering-backed Honda to a nearly three-second win as he lead all 16 laps.

While Wells was running away, there was some good racing going on behind him.  LaBelle Racing's Mike LaBelle worked his way up to a solid second, leaving Hayden Gillim (Bell Helmets/Teknic) and fast qualifier Jason Isennock (Foard Racing/Doghouse Customs) well behind.

Gillim's third place finish gives him the points lead in the Motorcycle-Superstore.com Pro Singles Championship with 35 points over the two class winners, Ryan Wells and Gerit Callies.  Washington's Hunter Taylor is also tied with all three for second with 24 points.