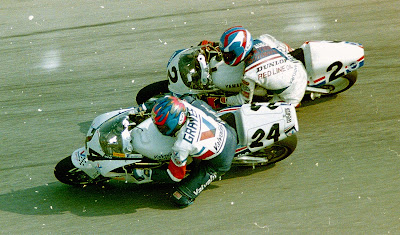 Up until the early-mid '90s, Indianapolis Raceway Park (now known as Lucas Oil Raceway at Indianapolis) in Clermont, IN. hosted a couple of WERA rounds throughout the season.  Usually scheduled in early spring and late fall, the races forever seemed to fall on rainy, cold days that would either linger in spring or hit early fall in the central Indiana area.  It didn't matter in those days as I'd be out checking out the action, starting in the mid '70s.  Before I'd found my love and adrenaline fix in motorcycle racing (and before I had moved to Indy in '72) the AMA even visited IRP when Dick Mann, Bart Markel and Cal Rayborn, among others, were still racing in the late '60s and early '70s.

But nonetheless, we would be out there either competing (or in my case TRYING to compete and having a helluva lot of fun doing so) or hanging on the fence checking out the action.  In the fall event of '87 I was lucky (?) enough to scam a gig of announcing one of the WERA regional events going on at the track.  It seemed as if the regular announcer couldn't make it, so Nan Cheney (now Algie) who had worked for WERA for years (and still does) called me up to ask if I was willing to take on the task.  I had a blast, but at the end of the weekend I was so hoarse I could barely talk and all but lost my voice for the next few days after the races were over (which might not have been a bad thing for the people that know/knew me!)

By the early '90s, WERA had taken over the Formula USA Series from Willow Springs Raceway's Bill Huth, who had started the 'run what ya brung' series in California that was quite successful.  Campaigning 8-10 tracks a year, the WERA Pro Series/Formula USA Series saw a wide variety of talent and machinery compete together on what was considered an even playing field.

For what was a varied platform, seeing 2-stroke 250s against 1100cc fire breathing 4-strokes brought out the best in racing and the best in the fans attention, and the racing was some of the best I've seen in my many years being a big-time fan.

One of the very few dates I can remember that happened during good weather was when WERA scheduled the Indy Nationals round in July '92, and for a change rainy and cold was put away for hot and humid, and as always the action was hot and heavy on the track.

Two of the regulars in the series at the time, as shown above, were dicing it up in the pack as eventual double-round winner Fritz Kling stole the show on his big Gold Hill Racing YamaMonster.  Chuck Graves on the #24 Team Hammer/Valvoline Suzuki and former WERA Formula II and AMA 250cc Grand Prix Champion Chris D'Alusio on the #2 Southwest Motorsports/Red Line Oil-backed Yamaha TZ250 go at it coming out of what was turn 15 at IRP just before hitting the front drag strip at the 2.5 mile track.  Big four-stroke against 'little' two-stroke, and neither giving an edge.

Graves, who cut his teeth in racing at Willow Springs Raceway, has since gone on to head up Graves Motorsports Yamaha, which has been the Yamaha representative and lead team in AMA Pro Road Racing since the early '00s, campaigning and winning several championships with riders Aaron Gobert, Jason DiSalvo, Jamie Hacking, Eric Bostrom, Josh Herrin, Ben Bostrom and Josh Hayes, just to name a few.

Dean Adams has this interview with Chuck Graves, the owner of Graves Motorsports out of California, who is best known to current fans as the owner of the 2-Time AMA Superbike Championship-winning Monster Energy Yamaha R1 team with rider Josh Hayes.

Graves was quite the accomplished racer himself in his day, competing in many an event at his 'home' track at Willow Springs, and constesting the WERA Pro Series/Formula USA Series in the early '90s, including the Team Hammer/Valvoline Suzuki/RoadRacing World-backed team.

Read on to see what Graves had to say with The King of Soup, Dean Adams at SuperBikePlanet.com: