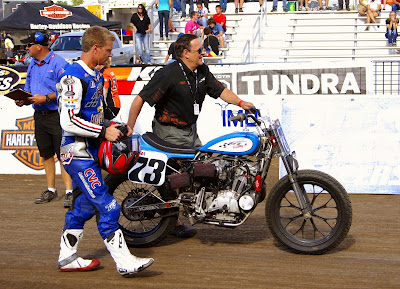 Of the 54 riders that scored points in a National main event during the 2011 AMA Pro Flat Track Harley-Davidson Insurance Grand National Championship presented by Motorcycle-Superstore.com season, there are only between 18-20 that contest the full calendar.  And of the few like the Jared Mees, Jake Johnsons and Sammy Halberts of The Rolling Thunder Show, there are probably another 8-10 riders per each of those 'name' stars that actually support and comprise the series' bulk of entrants, and each with a varied racing resume or background of their own.

One such rider who has been contesting the greatest show in racing on wheels for several years now is Canadian Doug Lawrence, AMA Pro Flat Track National #73.  Hailing originally from Toronto, Ontario, Lawrence is one of the premier Canadian flat trackers over the years to head south to contest the AMA Grand National Championship circuit, joining a list of riders from north of the border over the decades including the Sehl brothers, Doug, Jimmy and Dave, and Steve Beattie, to name just a few.

Having contested the series since the '05 season, Doug earned his National # during the 2007 season at the Tucson round of the Grand National Twins event, and has worn the #73 for what will be the 5th year in the upcoming 2012 season.  The 2011 season saw him place in the 17th overall spot in the championship, with a best-finish of 8th place at the Calistoga Half-Mile on October 1, for what was his best-ever finish since running the AMA Pro Flat Track schedule.  He also backed that up with a trio of 11th place finishes at Lake Odessa, Springfield Mile II (shown above) and Brainerd.

In the shot above, Doug and the team roll out his #73 R&J Racing/CVC Communications Agency/American H-D/Brent Armbruster-backed XR750 for the rider intros at round 16 of the 2011 AMA Pro Flat Track Harley-Davidson Insurance Grand National Championship presented by Motorcycle-Superstore.com at the Illinois State Fairgrounds mile oval.  For those that recognize Armbruster's name, he turns the wrenches for National #9 Jared Mees on the Rogers Lake Racing team.

Doug is one of 46 riders currently on  the pre-entry list for the 2012 season-opening doubleheader rounds at the Daytona Short Track, and he will be riding a Honda CRF450R with backing from Kurt Biegger Racing and CVC Communications and is looking forward to the new season.  And from the sound of things coming to us from north of the border here in the States, according to Inside Motorcycles story on Doug, he may be stepping up his program for the new year of racing.

Thanks to Graeme Jones, Todd Vallee and the great folks at Inside Motorcycles for this article about The Mississauga Missile, Doug Lawrence: