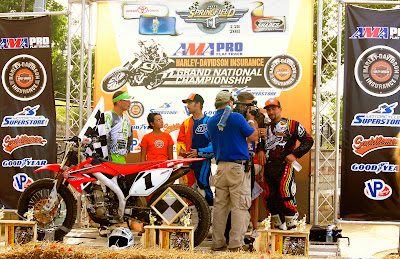 After a near-48 hour delay, round 7 of the 2011 AMA Pro Flat Track Harley-Davidson Insurance Grand National Championship presented by Motorcycle-Superstore.com season was in the books as Jake Johnson, Jared Mees and JR Schnabel, Jr. celebrate on the victory podium at the Springfield TT on May 30.  Johnson had just taken his 2nd victory in the last three races on his #1 Zanotti Racing/Schaeffer's H-D/Motion Pro/Arai-sponsored Honda CRF450R, with Mees following him home in 2nd place just 1.330 seconds back on his #9 Montgomeryville Cycle Center/Rogers Lake Racing Honda, and Schnabel another 3.281 seconds back on the #33 Monster Energy Werner-Springsteen Kawasaki KX450F.

While two of the three 'Js' on the podium discuss their race, Mees gets interviewed for the MavTV camera crew along with AMA Pro Flat Track announcer Barry Boone (partially hidden), after rains on Saturday two days before had washed out the event.  Riders, fans and everyone on-hand were greeted with hot and windy conditions on Memorial Day, but with some extra hard work by everyone involved the event came off without any major problems.

AMA Pro Flat Track and the IMDA announced today that three of last year's event sponsors would be joined by a new sponsor for the upcoming Springfield events.  K&N Filters will join returning event sponsors Green Toyota, Memphis Shades and Miller Lite Beer in helping to highlight some of the premier events on The Rolling Thunder Show at the Illinois State Fairgrounds.  All three of the returning sponsors can be seen at the top of the banner and backdrop for the podium ceremonies from last May's event.